By the time the gravity of the situation had set in, every office in the Watergate had been evacuated—except ours. 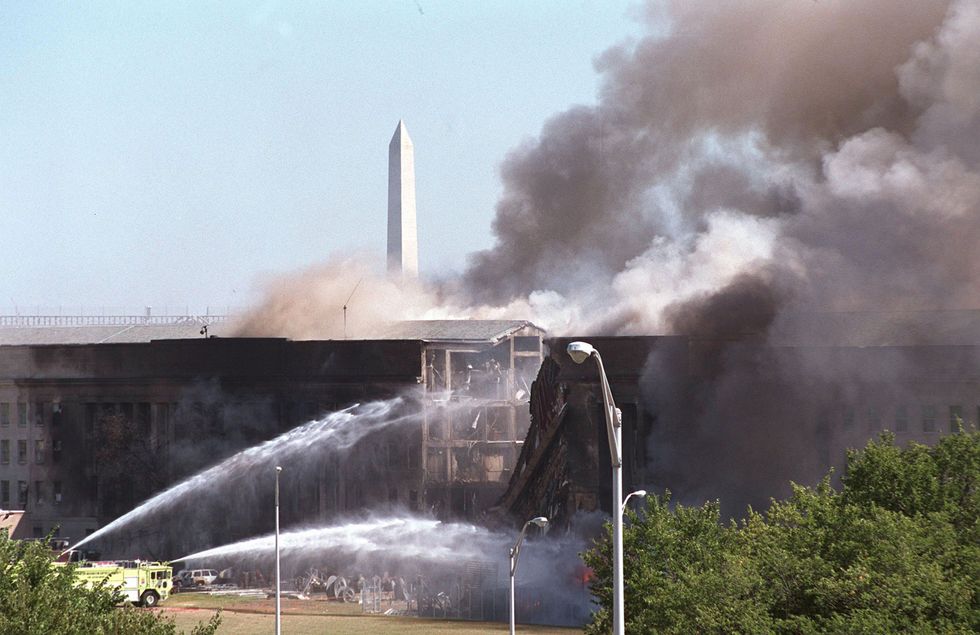 The Washington Momument stands in the background as firefighters pour water on a fire at the Pentagon that was caused by a hijacked plane crashing into the building September 11, 2001 in Washington, DC. Photo via Getty images by Greg Whitesell

I had been at my new job in Washington, D.C. for exactly one week when the terrorist attacks of September 11, 2001 began.

I worked for a publication called The Hotline, a daily political briefing catering to the most diehard insiders in and around Washington. Our readership was small but influential—subscribers ponied up $5,000 annually. Years before blogs and Twitter, if you wanted to know what was really happening in politics, you read The Hotline.

As usual, work began before 6 a.m. that day, with the sun just beginning to rise over the Potomac River, its rays slowly filtering through the glass-windowed wall of our little newsroom tucked inside the historic Watergate complex. The office was encircled by roughly a dozen television screens hanging from the ceiling so that we could see what was happening across every cable news channel simultaneously by simply looking up from the roughly 200 newspapers we were tasked with methodically scanning each morning for any relevant bit of political news.

It was just after 8:45 a.m.—before the vast majority of people on the East Coast had arrived to work, and while most of the West Coast was still asleep—when news broke that an aircraft had collided with the north tower of the World Trade Center. My colleagues paused briefly to take it in; we assumed it was a tragic accident, nothing more, and went back to work.

I rushed across the room to tell my boss Chuck Todd—today the renowned host of NBC’s “Meet the Press”—that I had just seen a second crash occurring live. “You’re seeing a replay,” he assured me. I walked back to my desk, wondering how I could have seen a “replay” of an event the media wasn’t really covering until after the fact.

It wasn’t even an hour later when American Airlines Flight 77 crashed into the Pentagon. We could see the smoke trail ascending into the sky just a few short miles away from our office.

By the time the gravity of the situation had set in, nearly every office in the Watergate had been evacuated, save for ours. Atlantic Media’s CEO David Bradley came down to assure us that anyone who wanted to leave could. Not a single person budged. Most of us were recent graduates from state colleges. The Hotline had given us an opportunity most would otherwise never have known, an oasis of meritocracy in a city catering to Ivy League children of privilege. We knew we were witnessing history and wanted to play our part, however small.

[quote position="left" is_quote="true"]A report began circulating that a fifth plane was heading down the Potomac toward the Watergate. … Seeing an empty horizon, I just went back to work. [/quote]

As I typed away on my desktop computer, a report (later proved false) began circulating that a fifth plane had been spotted heading down the Potomac toward the Watergate, home to political luminaries such as Bob Dole and then-National Security Advisor Condoleezza Rice. I peeked out my office window half expecting to see a jetliner barreling directly toward me. Seeing an empty horizon, I just went back to work.

Strangely, I wasn’t the least bit afraid. People later would say I was in shock, still processing the unfolding events. But the truth was that moving from a small town in Oregon to a place like Washington, D.C. was already so overwhelming that on some level I simply assumed that what was happening was normal. And I honestly never really believed that either I or our country were in any real danger.

In the coming days, Chuck Todd began assigning us respective areas of post-9/11 coverage. My beat—at the time a throwaway assignment for the most junior person on staff—was to track hate crimes against Muslim and Arab Americans across the United States. And while there were many incidents of violence, xenophobia, and religious intolerance (the FBI reports there were roughly 500 incidents of hate crimes against Muslim Americans in 2001), the predominant theme in D.C. was one of Americans going out of their way to embrace their neighbors, whether they were Muslim, Arab American, or otherwise.

[quote position="right" is_quote="true"]The predominant theme in D.C. was one of Americans going out of their way to embrace their neighbors, whether they were Muslim, Arab American, or otherwise. [/quote]

All around Washington, there were small gestures of kindness and tolerance. Many people assumed a local restaurant in my neighborhood, The Afghan Grill, would be boycotted or protested. Instead, it became nearly impossible to get a table as people flocked to learn more about the country’s cuisine and support the restaurant’s owners.

Meanwhile, directly across the street from the entrance to the Watergate was the Saudi Arabian embassy. Employees were warned to expect a flash of protests and suspicious activity after it was revealed that 15 of the 19 hijackers were citizens of Saudi Arabia. I never saw a single protestor. The only noticeable activity took place when Michael Moore’s film crew shot a scene there for his documentary film Fahrenheit 911.

Ironically, perhaps no public figure better encapsulated D.C.’s adherence to restraint and tolerance than President Bush himself. Despite his shortcomings, his response to Muslim Americans, and Islam itself, in the wake of the tragedy is undeniably compelling today. Nine days after the attacks, he said during an address to Congress:

In the wake of the terrorist attacks of September 11, President George W. Bush delivers remarks discouraging anti-Muslim sentiment, September 17, 2001, at the Islamic Center of Washington, D.C. Image via the George W. Bush Presidential Library and Museum

The unity expressed in the days and weeks following 9/11 was a truly exceptional moment. Since then, the only one that’s come close for me was the near universal sense of pride on the faces of Americans in New York City and Washington, D.C. the day after Barack Obama won the 2008 presidential election.

Now, 15 years later, I can’t help but wonder when or how we ended up at such a cultural crossroads. The Republican nominee for president speaks of setting up barriers, literal and figurative, to keep Muslims out of America. Anti-Muslim hate crimes remain far higher than their pre-9/11 levels. And many progressives are unwilling to confront the continued threat from extremist groups such as ISIS at the risk of sounding politically incorrect. We’ve been doing a better job separating ourselves from each other than from those who would do us real harm both here and abroad.

I’ve been told that I was on the “front lines” of September 11, 2001. I resist that description; I never saw a dead body and never truly feared for my own safety, naively or otherwise. What I did see was how my city, and our nation, responded to a real crisis—with kindness. Back in 2003, Muhammad Ali told journalist Cal Sussman that in his eyes, true evil didn’t necessarily require overt action, merely a lack of kindness.

Stories of kindness and tolerance are rarely covered by the media. I’d like to hope that it’s because they happen so often, they aren’t really newsworthy. But along with everything else that’s changed in the last 15 years, the media has been radically democratized. You don’t have pay $5,000 to find out what’s really happening, and I think that’s a great thing. I’d encourage all of us to share stories of kindness—to move the conversation forward with open eyes and open ears. It would go a long way toward restoring some of that post-9/11 unity, no tragedy required.