It’s come down to this. 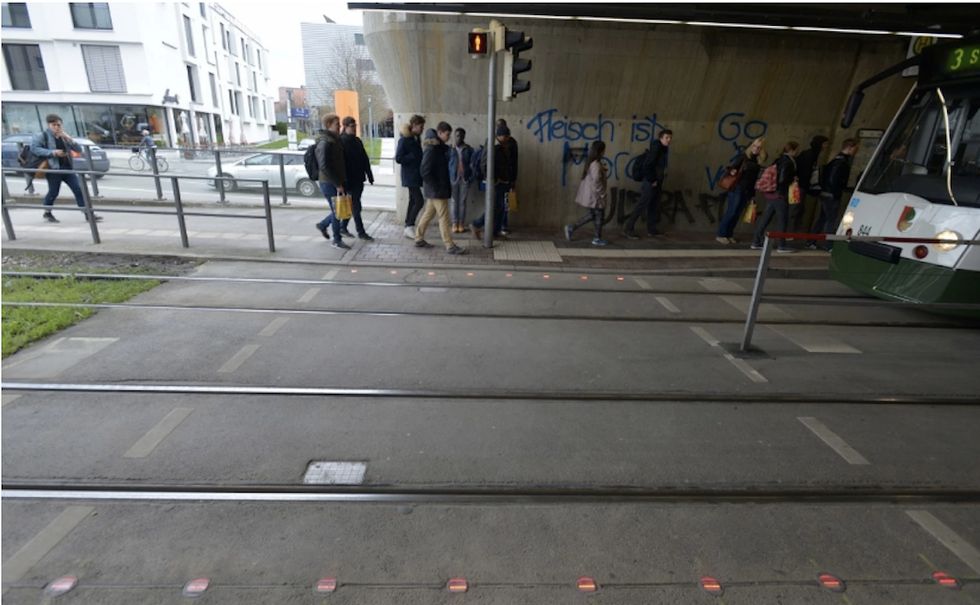 Smartphones aren’t just dangerous to use while driving; their use poses risks while walking, too.

German pedestrians are known to strictly abide by traffic light warnings, even when no cars are on the road. But lately they’ve been looking down at their smartphones instead of up at the signals, leading the city of Augsburg to embed traffic lights in the pavement. The move came on the heels of a tram killing a 15-year-old distracted by her hand-held device as she was crossing the tracks.

Not everyone agrees with Lermen’s claim. Some regard the new project as a waste of taxpayer money, the German newspaper Süddeutsche Zeitung reported. “Until now, I didn’t even notice them,” a pedestrian told the local Augsburger Allgemeine paper after the lights were pointed out to him.

It’s too early to tell if the new markers will curb the number of pedestrian mishaps. What is for certain, though, is that smartphones are a distraction. A survey of several European cities, including Berlin, found that 17 percent of pedestrians used their cellular devices in road traffic, with younger generations having been most likely to jeopardize their safety for a glance at their social media accounts.

The problem is even worse stateside. Despite the Department of Transportation having established an unequivocal link between ill-advised smartphone habits and pedestrian deaths, a University of Washington survey found that one-third of Americans are working or texting from their hand-held devices while crossing dangerous intersections.

The Chinese city of Chongqing is tackling its pedestrian-smartphone problem in a completely different way: the creation of special walking lanes for “smombies,” a word for smartphone zombies, or people staring at their phones rather than at the road ahead. “There are lots of elderly people and children in our street, and walking with your cellphone may cause unnecessary collisions here,” marketing spokesperson Nong Cheng told the Associated Press.

Unlike Augsburg and Chongqing, New Jersey is not giving in to its pedestrians’ smartphone obsessions. Several of the state’s lawmakers proposed a bill in March that, if passed, would fine people whose eyes are on their smartphones instead of on the road. According to NJ.com, 32 pedestrians have been killed in the state so far in 2016.

Democratic Assemblywoman Pamela Lampitt, who proposed the measure, told CBS New York, “If a person on the road—whether walking or driving—presents a risk to others on the road, there should be a law in place to dissuade and penalize risky behavior.”