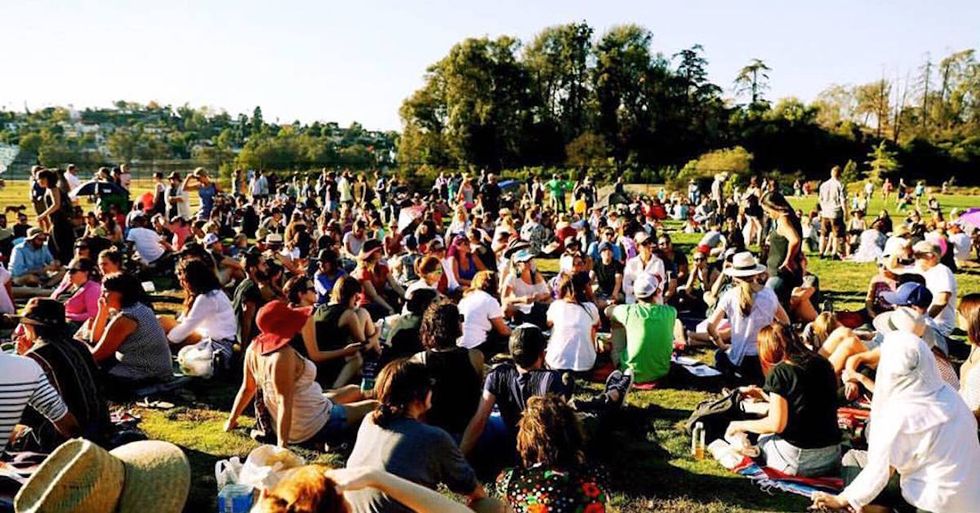 The day after 8,000 people marched through downtown Los Angeles in a peaceful protest against President-elect Donald Trump, a different type of gathering took place just three miles north, at a park in Silver Lake. Initially conceived in the Hillary Clinton inspired secret Facebook group, Pantsuit Nation, the group Stronger Together LA caught the attention of local women (and a few supportive men) who wanted to be part of the solution.

The call-to-action started with a simple Facebook event description that read: “Let's gather to share words of inspiration, ideas for action, or simply grieve with one another as needed. In these challenging moments, we must come together and remember that we are not alone, and we are powerful.” Organizers Kara Durrett and Ellen Etten aren’t practiced political activists, but watching the disappointing returns on election night jolted them into action. What was originally meant to be a small picnic among friends, turned into a productive gathering of roughly 500 people, all looking for ways to uphold progressive values. Topics of discussion ranged from reversing global warming to defending women’s reproductive rights, but the most pressing issue centered on how we can protect minorities and immigrants from the discriminatory policies Trump has proposed.

What the anti-Trump march proved in numbers, the Stronger Together LA meet-up proved in ideas. Once broken up into circles, attendees had a chance to hear the opinions of strangers and collectively brainstorm ways to act. Women, with backgrounds ranging from education to public policy to comedy, built on one another’s ideas to bust myths and find answers to common questions. While sitting in circles around balloons and picnic food might not be everyone’s image of radical activism, every group came away from the event with a concrete plan of action.

Here’s how we can begin to enforce the inclusive principles more than half of American voters chose this election.

Here’s a list of representatives and a list of U.S. senators by state with phone numbers and addresses. According to one Stronger Together LA member, calling your state’s senators takes a grand total of ten minutes. And as another group member and former staffer stressed, calling your representatives does scare them into action. Not sure where to start or what to say? Follow this script and let your local politicians know we cannot allow alleged white supremacist Steve Bannon to have a spot in the White House:

“Good afternoon! My name is ______ and I am one of Senator/Congressman ______'s constituents living at (address). How are you today? Can I please have your name? I'm calling today to express grave concern about the recent appointment by our President-elect Donald Trump of Mr. Steve Bannon, who is known to be a white nationalist and anti-Semite. Are you aware of this news?

I understand that Senator/Congressman ______ does not have a say in whether this appointment goes through, but given the major increase in hate crimes we are seeing all over the nation, I believe it is imperative that Republican leaders in D.C. speak out formally and clearly against this appointment. Are you aware that the Southern Poverty Law Center says there have been more hate crimes and acts of violence against marginalized groups in this past week than there were immediately after September 11th?

Do you know of a woman who might be a perfect fit for Congress, but she might need a little encouragement to get started? There are a few organizations devoted to doing just that. Check out Emerge California if you’re local to the west coast, and head over to Emily’s List to support women running for positions across the country.

The same day Donald Trump won the presidency, the number of women of color in the Senate quadrupled—meaning there will now be four women of color in the Senate. There’s plenty of work to be done to get those numbers higher, and beyond running for office ourselves, we can support the women who’ve already managed to accomplish this historic victory. Learn more about them here.

Because Louisiana follows a different election process for state senators, Democrat Foster Campbell could win the runoff election next month and give Democrats a 51-49 lead in the Senate. You can find out more about Foster Campbell here and donate to his campaign here.

Start your own group

Engage your local community. As Durrett and Etten have proven, you don’t need a masters degree in public policy to make a difference. Facebook—despite the deserved heat it has garnered lately—is an effective way to organize protests and solution-oriented events. Keep your goals clear and focused, host your meet-up at a local park, seek permits if necessary, and delegate responsibilities to co-organizers. Depending on how many people RSVP, a megaphone might be useful, as well as a corresponding Facebook group or email chain for organizing future events.

These are small beginnings to solving a much larger problem, but they’re nevertheless a start. Only by cultivating a dialogue that engages our local communities can we affect the changes we desperately want to see.