“Among the most dishonest people on earth” 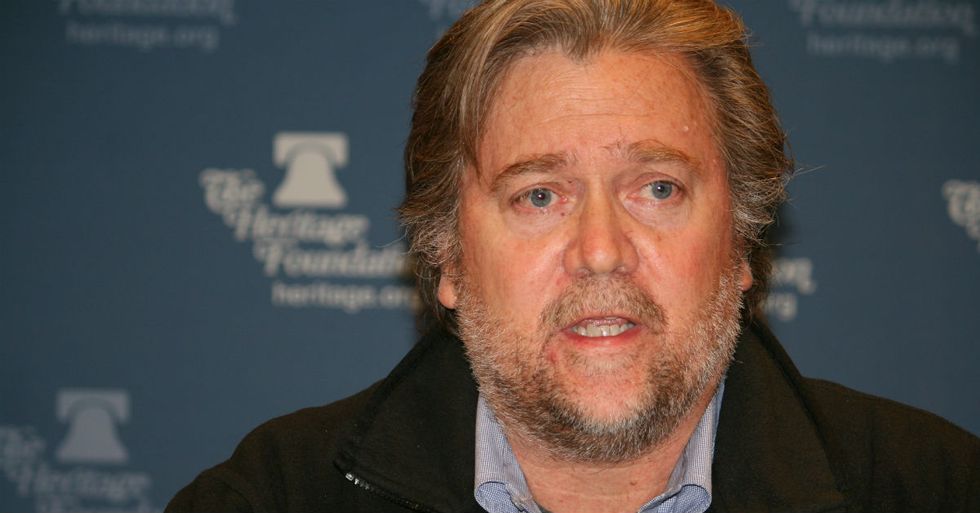 Remember Steve Bannon? We can’t blame you if you were trying to forget.

The Alt Right loving, former Breitbart News executive with a flair for white nationalist ideas, was an instrumental player in the resurrection and ultimate victory of Donald Trump’s presidential campaign. And after the election, he was elevated to one of the most powerful positions in government, serving as Trump’s senior advisor.

And now he’s using that perch to bully and effectively threaten the free press, calling them, “among the most dishonest people on earth,” and using his first mainstream media interview to literally tell the press to “keep its mouth shut.”

“The media should be embarrassed and humiliated and keep its mouth shut and just listen for a while,” Bannon told the New York Times in a phone interview on Wednesday.

His reasoning, so much as you call the trollish broadside a coherent thought, was that because the mainstream media (or, what he calls the “elite media”) is attempting to hold Trump accountable and was wrong about their election prognostications, they have invalidated their role as members of the fourth estate.

“I want you to quote this,” Mr. Bannon added, “The media here is the opposition party. They don’t understand this country. They still do not understand why Donald Trump is the president of the United States.”

You know what, we hear you on that last part, Steve. We’re all still trying to figure that one out.

Throughout the interview, Bannon reportedly remained “calm” but also repeatedly said the media, including The Times, was “humiliated” by Trump’s victory and is now serving as the “opposition party” more than the Democrats themselves even.

As Kevin Drum of Mother Jones writes, the emotional and partisan tone makes it sounds like Bannon doesn’t actually realize he’s now an employee of the federal government whose job is to serve the entire American public, not just a hyperpartisan agenda. That’s a sentiment echoed by Talking Points Memo, where Josh Marshall says the likely response from the same press that Bannon is attacking will be “contempt and derision.”

But honestly, that may be just what Bannon wants. Stay with me here on this one. After all, the longest-standing grievance amongst conservatives is that the media is biased against them. To that end, it’s worth noting that the Daily Caller, a conservative news outlet, pointed out that in 2009, the Obama Administration struck a similar tone against Fox News, calling them the “opposition” and saying there was an active “war” with the cable news network.

Still, that’s a lot different than a blanket rejection of nearly the entire free press. And one that won’t offer any progress in helping get out a clear message of truth and transparency about what’s happening at the highest level of government. In other words, probably just what Steve Bannon and Donald Trump want.