This YouTuber put henna freckles on her face and it was a complete disaster.

No one told her how long henna tattoos last? 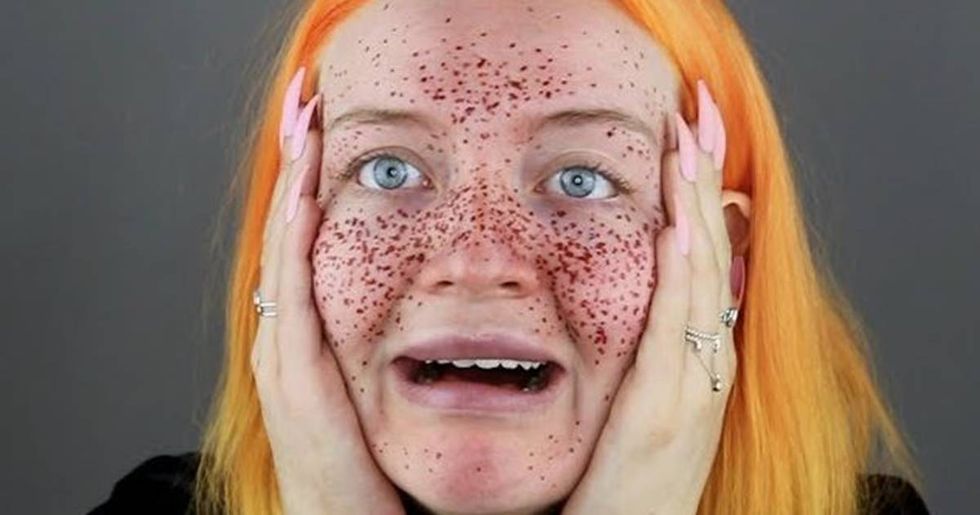 A few months back, Instagram user uglysxegirl created a viral video where she used henna to create freckles on her face. After applying the dye, she added a layer of foundation, and her freckles looked not only beautiful but natural, too.

Henna is a vegetable-based dye that has been used since antiquity in Southeast Asia, the Middle East, and Africa to create temporary tattoos and dye fabrics.

Jon bought some henna dye online and began dabbing on her face without any real plan. She put freckle-sized dots beneath her eyes, on her nose, and around her jawline and chin.

Shortly after she applied the dye, her face began to turn red. “It burns a little bit,” she said. “Is that normal? … I have no idea if I’m doing this right … This is either really brave or dumb.”

After applying the henna, Jon wasn’t too thrilled with how it looked, so she tried to remove it with a makeup wipe and nothing happened. So she made a second attempt, this time with olive oil, and that did nothing either. “I think I’m going to cry after this video,” she said. “I’m laughing but I’m crying.”

Clearly, Jon didn’t realize that henna tattoos can last up to a month.

“WELLLLLL,” she wrote on her YouTube video, “sometimes I make bad decisions. This was one of them.”