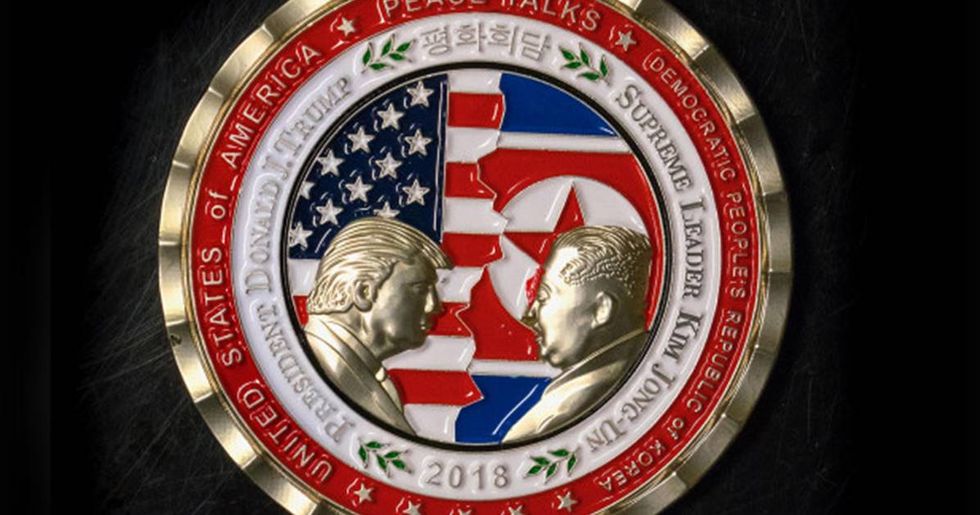 As a presidential candidate, Donald Trump positioned himself as an outsider who’d shake up Washington. He claimed that only he could fix long-standing problems that politicians had ignored.

One of those issues was the U.S.’s intractable relationship with North Korea. Trump saw it as a battle between two men instead of two countries’ geopolitical differences. “Just get me in the room with the guy [Kim Jong Un] and I’ll figure it out,” Trump has said, according to a White House source.

Over the past year, Trump has baited Kim with insults and praise, hoping to bring him to the table. Eventually, both parties agreed to a summit on June 12 in Singapore.

The White House celebrated by issuing a commemorative coin.

"My Secretary of State Went to North Korea, But All I Got Was This Lousy Challenge Coin!" https://t.co/FFzFASidqK pic.twitter.com/uKrQsJB7oz

On May 24, Trump wrote a letter to Kim, canceling the planned summit.

The letter was conciliatory in tone, but he claimed a North Korean official calling Mike Pence “ignorant and stupid” as the deal-killer: “Sadly, based on the tremendous anger and open hostility displayed in your most recent statement, I feel it is inappropriate, at this time, to have this long-planned meeting,” Trump wrote.

The letter also contained a quick hit of Trump’s trademark braggadocio: “You talk about your nuclear capabilities, but ours are so massive and powerful that I pray to God they will never have to be used.”

The summit cancellation comes after some major missteps by the Trump Administration. National security advisor John Bolton suggested North Korea should be denuclearized following the Libya model. (After Libya turned over its nuclear weapons, its dictator, Muammar Gaddafi, was captured and died.)

Vice President Mike Pence doubled down on Bolton’s ill-advised comments, saying that North Korea could end up like Libya if it didn’t make a nuclear deal with Washington. This prompted North Korean diplomat Choe Son Hui to lash out at Pence. “As a person involved in U.S. affairs, I cannot suppress my surprise at such ignorant and stupid remarks gushing from the mouth of the U.S. vice president,” she said, according to state news agency KNCA.

Hours after Trump’s letter to Kim, he reverted to the hostile tone that has marked the U.S.-North Korea relationship for decades. He warned that the United States and its allies are prepared to respond should “foolish or reckless acts be taken by North Korea.”

Although the summit is canceled and tensions between the U.S. and North Korea are heating up once again, there is one place where people can still find hope: the White House gift shop.

After the summit was canceled, the website released a jumbled statement that feels as if it came from the president himself celebrating the political near-miss:

We greatly appreciate your time, patience, and effort with respect to our recent negotiations and discussions relative to a summit long sought by both parties, which was scheduled to take place on June 12 in Singapore. We were informed that the meeting was requested by North Korea, but that to us is totally irrelevant. I was very much looking forward to being there with you. Sadly, based on the tremendous anger and open hostility displayed in your most recent statement, I feel it is inappropriate, at this time, to have this long-planned meeting. Therefore, please let this letter serve to represent that the Singapore summit, for the good of both parties, but to the detriment of the world, will not take place. You talk about your nuclear capabilities, but ours are so massive and powerful that I pray to God they will never have to be used.

I felt a wonderful dialogue was building up between you and me, and ultimately it is only that dialogue that matters. Some day, I look very much forward to meeting you. In the meantime, I want to thank you for the release of the hostages who are now home with their families. That was a beautiful gesture and was very much appreciated.

If you change your mind having to do with this most important summit, please do not hesitate to call me or write. The world, and North Korea in particular, has lost a great opportunity for lasting peace and great prosperity and wealth. This missed opportunity is a truly sad moment in history.

Donald J. Trump
President of the United States of America