These Are The 4 Most Vulnerable Groups Of Immigrants Right Now

A team of legal scholars breaks down Trump’s policies 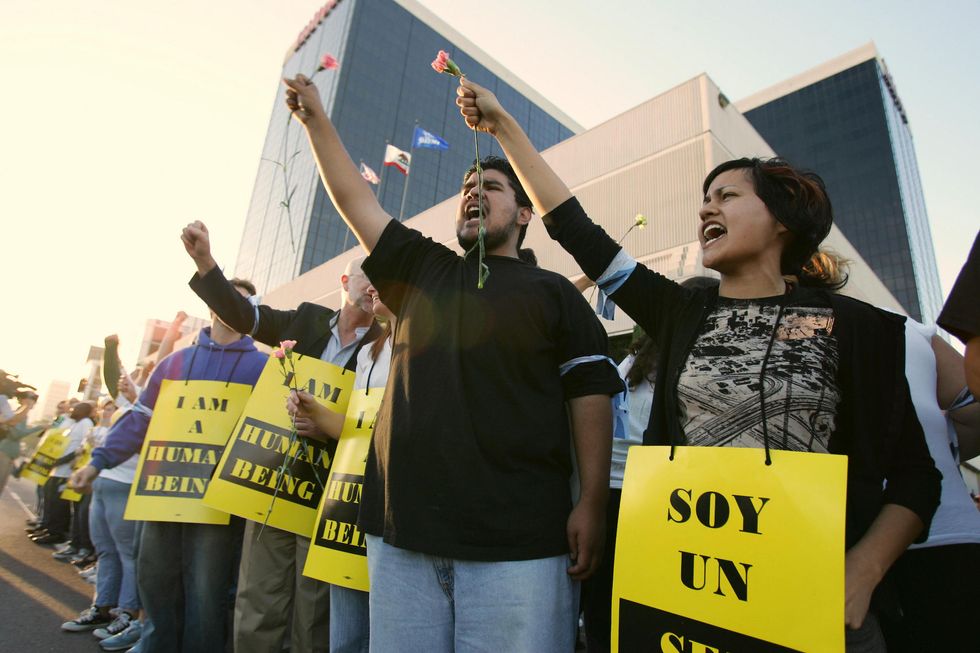 This week, Donald Trump issued sweeping executive orders affecting immigrants and refugees and defining expansively the purported "criminal aliens" that he intends to target. Strikingly, he has eliminated old enforcement priorities, ensuring that discretion will be exercised by agents with little guidance from the executive order beyond sweeping anti-immigrant exhortations. During his campaign, he stated his intention to remove all 11 million “illegal immigrants” from the country, although some may be allowed to return.

However, terms like “criminal aliens” and “illegal immigrants” gloss over the various immigration statuses and histories of millions of individuals. We’d like to offer a more nuanced description of the individuals who may be targeted by President Trump’s immigration enforcement plans.

Our discussion is informed by our research. Since 2014, we have followed the lives of some 50 Southern California immigrants, many of whom either lack or never had legal status in the United States. Each of these individuals has a different story of how and when they came to the United States. Some are related to U.S. citizens and some are not. They have had unique experiences studying, working and living in this country.

And now, these differences could play a major role in how individual immigrants are impacted by the new administration’s enforcement of immigration laws.

Administrations prioritize the removal of some immigrants over others because immigration enforcement resources are limited. Since the mid-1990s, previous administrations have focused on removing immigrants with criminal convictions, regardless of whether they have legal residency. The Trump administration may prioritize some of the same groups. However, Trump may be more aggressive in defining who is eligible for deportation.

Trump has pledged that his administration will rapidly deport 2 to 3 million “criminal aliens.” His website cites a 2013 Center for Immigration Studies report for this figure. Immigration scholars have suggested the actual number is significantly lower. For example, in 2015, the nonpartisan Migration Policy Institute reported there are 820,000 unauthorized immigrants with criminal convictions in the United States. Many were charged with misdemeanors or unlawful entry.

This is unsurprising. Research from criminologists shows that immigration actually lowers the rates of violent crimes.

Trump, however, has signaled that the category of “criminal aliens” may be much broader than individuals convicted of serious crimes. It may include individuals arrested, but not convicted, or individuals with unsubstantiated gang affiliations. But even this incredibly broad definition of criminal aliens does not cover all immigrants.

There are three other broad groups of individuals who generally fall outside of this priority deportation category.

Immigrants who arrived as children

About 750,000 young people qualified for the 2012 Deferred Action for Childhood Arrivals (DACA) program, which grants two years of permission to work and protection from deportation to certain undocumented immigrants who came to the United States as children.

In order to qualify for DACA, the children must have arrived in the United States before June 15, 2007, completed high school or its equivalent and have a criminal record that is clear of anything more than minor misdemeanors.

Most individuals who received or were eligible for DACA will not likely be among those prioritized for enforcement. Trump pledged to rescind DACA immediately. But, after being elected, he expressed sympathy for these young people and suggested he might be willing to find a solution to their problems.

If DACA were rescinded, those young people, who are culturally Americans, would face numerous challenges, including unemployment, the inability to go to college, and the risk of deportation. To alleviate these burdens, senators Dick Durban and Lindsey Graham introduced the BRIDGE Act in December 2016. This legislation would provide DACA recipients and similarly situated young people with “provisional protected presence”—temporary permission to remain in the country, but no path to citizenship.

In the current highly polarized political context, it’s unclear if the bill will have majority support in the House, and President Trump has made no promise to sign it.

Another 4 million immigrants would potentially have qualified for the Deferred Action for Parents of Americans (DAPA) program, or an expansion of DACA known as DACA+. President Obama announced these programs in 2014.

DACA+ broadened the DACA program to allow more young people to qualify. DAPA would have enabled undocumented parents of U.S. citizens or lawful permanent resident children to qualify for permission to work and a temporary protection from deportation with two conditions: They had to be in the country continuously since Jan. 1, 2010, and not be convicted of any disqualifying crimes.

But, due to a lawsuit, the programs were never implemented.

Trump promised to immediately rescind DAPA and DACA+, and he may do so before their legality is resolved in court. With the possible exception of those who have committed minor misdemeanors, individuals who would have been covered by these programs likely will remain a low enforcement priority.

Some undocumented parents of U.S. citizens might qualify for residency through their children. However, they will still face steep barriers to legalization. For example, wait times for these family visas stretch for years. Even when visas become available, those who have spent more than one year in the country without lawful status face a 10-year ban on being able to enter the country legally. Many cannot afford legal counsel to assist in this process, and some of these individuals may have missed prior immigration court hearings and been ordered deported without being present.

A third group consists of several million adults who are not parents of U.S. citizens or permanent residents, do not have criminal records, and are currently working in the country. These individuals are unlikely to be a named priority for deportation. But if the new administration engages in an enforcement strategy of high-profile workplace raids, as were common under President George W. Bush, these individuals could still be vulnerable.

Even if they are not apprehended and deported, it seems unlikely that they will receive authorization to work in the United States or legal protection from deportation.

Immigrants who have recently entered the United States, such as unaccompanied minors fleeing violence in Central America, had already been prioritized for removal by the Obama administration. Trump’s promises to stiffen border enforcement will likely ensure their continued prioritization for deportation.

The groups identified above are further affected by legal histories that can create opportunities or barriers.

For example, close relatives of U.S. citizens, certain crime victims and those with a well-founded fear of persecution in their country of origin may be able to qualify for visas or asylum. On the other hand, those who failed to attend an immigration court hearing, left and reentered the country without authorization or previously claimed to be U.S. citizens may be at heightened risk of deportation.

Trump’s rhetoric about building a wall with Mexico also suggests that immigrants from Mexico are perceived to be a problem, even though Mexicans constitute a declining share of the unauthorized population. Individuals perceived to be Mexican nationals therefore may be particularly at risk for enforcement efforts, including those that target individuals based on their racial or ethnic appearance.

It is still unclear how priorities set by Trump will trickle down to the officers who are actually carrying out enforcement practices. Immigration and Customs Enforcement agents and Customs and Border Protection agents who felt constrained by Obama’s policies and programs may feel more empowered to engage in aggressive and racially targeted enforcement efforts.

The new Department of Homeland Security secretary, retired General John Kelly, has no legal training. He could either serve as a check on overly zealous enforcement efforts or devise policies that facilitate them.

Trump’s focus on deporting “criminal aliens” and his suggestion that he might offer reprieve to certain immigrant youth suggest there could be some continuity between his enforcement priorities and those of Obama. But the new president’s emphasis on mass deportation promotes fear. This, in turn, may make noncitizens less likely to apply for naturalization, attend school, seek medical care or challenge violations of labor laws.

Despite fear, however, some immigrants have expressed renewed commitment to activism. As one interviewee told us, “The struggle continues.”