A confused dude on Twitter tried to explain the female anatomy to a gynecologist. Who is also a woman. 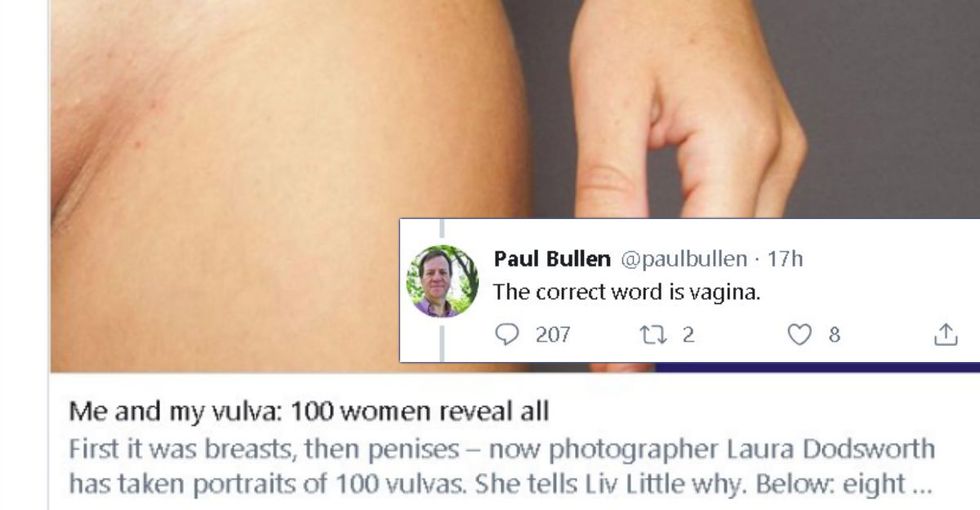 Mansplaining is a very serious issue. When women are marginalized by men in professional or public dialogue, it deserves to be called out. Mansplaining also has tiers of offense, and it turns out that some of the most egregious examples are pretty hilarious.

In this case, a man on Twitter named Paul Bullen decided to weigh in on the correct terms for describing female sexual organs. Normally, we have a policy at GOOD of not “punching down," i.e. not calling out everyday people who were thrust into the public spotlight against their will. Bullen isn't your typical public figure, but he does list himself as a “writer, editor, teacher," has a publicly listed website, and enjoys weighing in on a number of daily issues across politics and culture. And Paul Bullen isn't backing down after being hilariously called out for his viral mansplaining episode. So, yeah, we're going to have a little fun with this one. Sorry, Paul.

Hold on tight, because there are a number of steps leading up this ladder of ridiculous.

First, Bullen decided he was more qualified than an established and reputable newspaper, The Guardian. Bullen took issue with their headline, “Me and my vulva: 100 women reveal all."

And that's OK, Paul. There's nothing wrong with a little amateur media criticism. We get it here all the time and frankly, oftentimes it's perfectly merited.

Except, Paul decided to weigh in by “correcting" the use of the word “vulva" and veered right into mansplaining territory by declaring: “The correct word is vagina."

Here's where things really go off the rails.

Dr. Jennifer Gunter, who is an actual gynecologist, and yes, a woman, replied to Paul by offering a helpful and reasoned explanation:

“Hi, I'm a gynecologist and an international expert on both the vagina and vulva. These are vulvas. I wrote this post with a handy Venn diagram to help people separate the two! Enjoy"

Yes, she was totally owning him. But honestly, so far as mic drops go, that was incredibly gentle and offered Paul the opportunity to graciously respond, or even to just move on and not respond at all.

But of course, that didn't happen.

Instead, he went on a bit of a rant. An entirely uninformed, increasingly unhinged rant. Just see for yourself:

Well, the folks on Twitter had seen enough and weighed in with some great insights, i.e. drags, on Paul:

And even after all of THAT, Paul doubled down praising his own politeness and respect while only suggesting that “if" he is wrong, he certainly handled it better than his critics. Which, of course, only led to a full-on avalanche of more poignant and hilarious clapbacks.

So, the obvious lesson here is don't mansplain. It's not that complicated. But we can at least be grateful that until we see the day when mansplaining has been added to the dustbin of history, we at least have guys like Paul to amuse us along the way.