Wetlands Prevented $625 Million In Damage During Hurricane Sandy. Why Are We Paving Over Them? 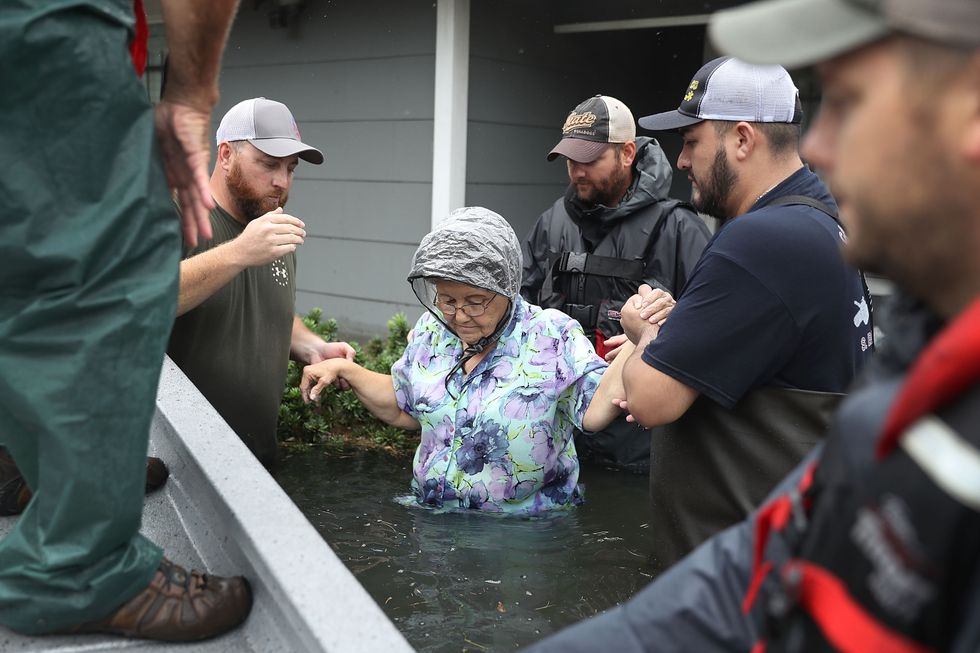 Volunteer rescue workers help a woman from her home that was inundated with the flooding from Hurricane Harvey. Photo by Joe Raedle/Getty Images.

Since its landfall on Aug. 25, Hurricane Harvey has dumped an estimated 15 trillion gallons of water on the city of Houston. That’s the equivalent of standing directly under Niagara Falls for more than seven months!

The immense amount of water quickly overwhelmed the city’s stormwater infrastructure and has caused untold devastation and loss of life. It may very well be the greatest downpour in American history. But the problem isn’t just that there’s a lot of rain — it’s that, like a lot of urban areas in the United States, the city eliminated some of the planet’s built-in safeguards.

The city of Houston used to be surrounded by miles of forest, prairie, and wetlands. Besides providing campgrounds and animal habitat, these areas also helped prevent flooding. The plants and soil act like natural sponges and sieves, absorbing and slowing down the flow of water.

But as the city’s grown, these natural areas have been drained, leveled, and paved over. And asphalt isn’t exactly the most absorbent thing ever. Instead, any water that falls onto Houston’s many streets and parking lots quickly flows downhill. Get too much all at once, and the city’s storm drains get overwhelmed. Neighborhoods turn into lakes and roads into rivers.

“Wetlands can be incredibly effective at reducing property damages from catastrophic storms,” University of California, Santa Cruz, professor Siddharth Narayan said in a press release. That’s why cities should consider preserving or creating wetlands and other natural areas. In fact, a new paper by Narayan in the journal Nature estimated that coastal wetlands along the East Coast prevented $625 million worth of damages during Hurricane Sandy in 2012.

A truck driver walks past an abandoned truck while checking the depth of an underpass during the aftermath of Hurricane Harvey. Image by Brendan Smialowski/AFP/Getty Images.

Thanks to climate change, scientists have predicted that changes to wind patterns and ocean temperatures may mean extreme hurricanes will be more common. In fact, we’re already seeing this trend. After all, this is Houston’s third “500-year” flood in three years.

Legislation like 1972’s Clean Water Act was supposed to help prevent these kinds of situations; in addition to controlling pollution, the act required American developers to mitigate their impact on certain protected wetlands, including by restoring them or “building” new ones elsewhere.

Though the Trump administration has signalled it wants to roll back Obama-era policies about the law, that doesn’t mean all is lost. Restoring or protecting wetlands and investing in green infrastructure could restore our cities’ natural sponges. And when it comes to man-made structures, Philadelphia’s green roofs, Los Angeles’ reservoirs, the U.K.’s “thirsty concrete,” and China’s sponge cities can all help slow down stormwater runoff and prevent flooding in their respective areas. Even small neighborhood-level changes can help, like planting rain gardens.

The good news: There are many ways our cities can change.

Of course, the simplest thing may be to ensure that existing natural areas stay as they are. Milwaukee is one traditionally industrial city that’s managed to do it, protecting over 2,700 acres of land, which the Environmental Protection Agency says can store 1.3 billion gallons of water.

Our cities are now hundreds or thousands of times larger than their founders ever realized they might be. We have to think on a larger scale. While there is no quick fix to ecological disasters of this scale, scientists, urban planners, and even home gardeners can start by looking to the natural world for solutions that already exist.