From floating cities to a skatepark that also doubles as a resevoir, these projects are the future of climate-proof design. 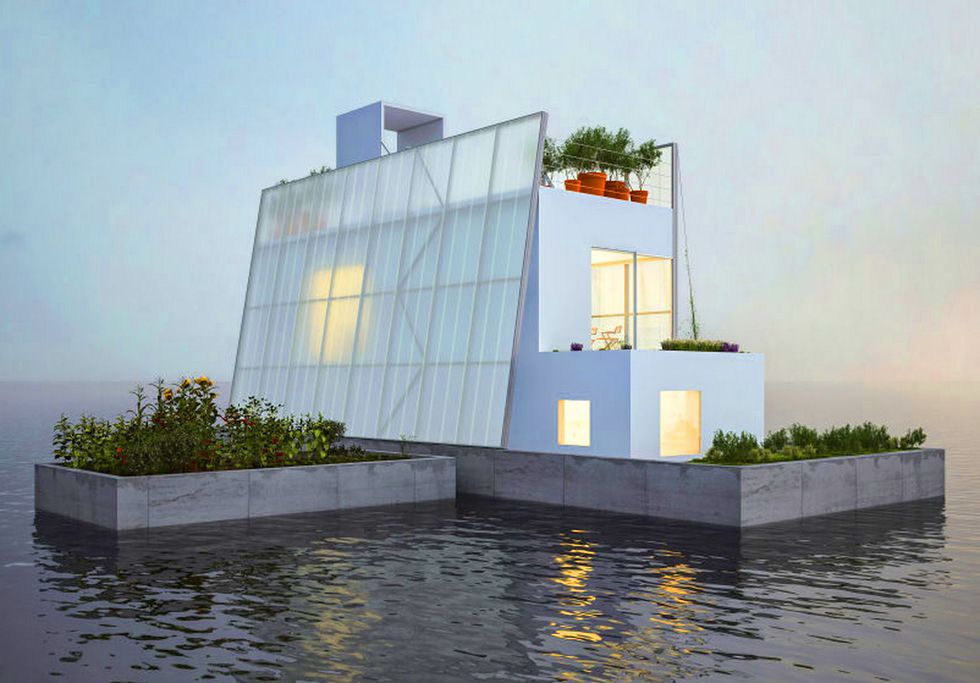 A Dutch prototype to guard cities against flooding caused by global warming. Image via Waterstudio.nl.

This week marks the 10th anniversary of Hurricane Katrina, when the levies broke and the city experienced one of the worst natural disasters in US history. The intervening years have seen Hurricane Sandy immerse half of downtown Manhattan in sea brine, and coasts rise globally—with climate change listed as the primary culprit. With dire projections of dangerously elevated water levels, and the continued melting of the polar ice caps, the future could see more and more of the world’s most populous and cultural significant cities fall prey to encroaching tides. This has been a clarion call to action for architects, artists, city planners, and designers, who have viewed this as a challenge not just of their talents but also for the future of cities.

In Thailand, A Solar-Powered House Above The Flood Plains

Thailand’s tropical climate is hard on its buildings, and each year floods damage or destroy hundreds of homes. In 2014, the Solar Decathlon Europe team from King Mongkut’s Unviersity of Technology in Thonburi (KMUTT) melded the traditional Thai architecture style known as “Baan Chaan” with modern technology, creating an Adaptive House. This self-contained house features modular construction, intuitive cooling systems, and sun shading devices that run on solar power. The Adaptive House is also built from a sustainable, steel intermodal container that is easily transportable, flexible for building add-ons, and designed to be replicated multiple times to create moveable communities (all made from locally-sourced materials). As KMUTT states on its website, “the design is the best to live sustainable in floodplain area like in central Thailand, by using Thai traditional wisdom, which is to ‘live sustainability as community’.”

In 2013, Paper Houses issued a challenge to architects and designers: let’s repurpose the UK’s underused waterways and fight flooding in residential areas. Created by CTA, the Floating House is a lightweight structure that can be built on flood-plains and piling, or simply free-float as a houseboat. Inside, the living space is constructed of insulated timber, approximately 46 feet long by 15 feet wide. Gardens have also been incorporated into the structure, and add a touch of flourish to the base as well as the roof. The Floating House will (eventually) be available for download from an open source website to be 3D printed. It’s hoped that the house could be recreated anywhere using these components, either by an individial or engineer, and assembled within a couple of weeks.

Along with New York and London, Paris has begun what will surely be an ongoing battle with rising water levels along the Seine. With a massive (and important) river way cutting directly through the city, architect Dr. Margot Krasojević has imagined an enclosed circular glass bar that would rest directly over spillways—allowing excess water to move seamlessly through the channel. The circular bar directs water through a series of ramps situated beneath a moveable glass floor. The bar is combined with a glass monocoque shell that helps support the water’s weight. For an extra aesthetic touch, the glass is etched into a lattice structure. The water, once collected, is then filtered and channeled upstream into nearby reservoirs via a network of submerged canals.

Much publicized, Venice’s rising sea levels have come perilously close to destroying this legendary city. Rather than admit defeat, some in the creative class are getting, well, creative. Recently Act_Romegialli designed the San Giobbe +160 project in a remodeled workshop-turned-residence on Fondamenta di San Giobbe. Inside their studio, a concrete basin at the entrance was built to capture overflow waters--while retaining the modernist environment of the interiors. This isn’t the first time Venice has dabbled with flood protection: they also recently tested out a 7 billion dollar flood gate.

Can Faucets Keep Louisiana From Drowning?

This was the question Fast Co recently asked its readers. As the website noted, “Louisiana is drowning: Over the last eight decades, more than 2,000 square miles of land have disappeared underwater.” This is partially due to an ill thought out plan in the 1930s by local engineers to seal off the Mississippi River with levees to prevent flooding that also inadvertedly stymied the river's natural process of building land. This process included the slow acculmulation of sediment in the delta, which traditionally helped protect cities from storms and flooding. Now a new project called Delta for All hopes to recreate this natural process via design. The Baird Team, headed up by Baird & Associates with a team of experts from planning and design firm Sasaki Associates (and others, is one of the winners of the Changing Course competition to reimagine the Delta, and thinks the answer might lie in a system of “faucets.”

This series of tap-like contraptions would periodically dot the river, and could be turned off an on like faucets--allowing sediment to naturally and safely spread. "Over the next hundred years you can imagine opening the river up in a basin, letting it run for a while, capturing as much sediment as you can, doing it again in another basin, and kind of cycling through the basins to try to capture as much land as possible," says Gina Ford, a principal at Sasaki Associates. This could potentially save New Orleans billions on future flood damage, and even help avoid another $2 billion the city is projected to pay to help replace locks on the current Bonnet Carré Spillway.

NYC Gets To Get A Much Needed Facelift

One of the proposed designs, courtesy of BIG Architecture.

After Hurricane Sandy spiraled the city into chaos, the Big Apple realized it needed to get smart about flooding and quick. Recently a series of important infrastructure initiatives intended to protect New York City and New Jersey from flooding were given the OK. The largest design competition in US history called Rebuild by Design, created in response to hurricane Sandy, the plans have been given a total budget of almost $1bn. The winning entries include a $335m flood barrier along Manhattan’s Lower East Side and a $60m living breakwater along Staten Island’s South Shore. In New Jersey, $230m will be put towards a “resiliency district” in Hoboken. Timelines for completion have not been finalized, but New York mayor Bill de Blasio promised an iron-clad commitment. “Over four or five years, you’ll see a hugely different physical reality in this city,” he told The Guardian.

The Skatepark That Also Prevents Flooding

A sketch of the skate bowl. Image: Søren Nordal Enevoldsen.

In the last decade Scandinavia has made major strides in fighting climate change through eco-savvy design—with Denmark leading the charge. Recently the drainage canal and rainwater collection system at Rabalder Park in Roskilde, Denmark, was redesigned to also double as a skatepark. The park, which is a finalist for an Index Award, began as humdrum project by the city’s sewage department that quickly blossomed into an ingenuous testament to the creative mind. As Wired reported, “Over the past few years, climate change has increased rainfall, leaving basements and streets flooded. The city needed to devise a way to separate rain and sewage water from the adjacent areas.”

The city brought on Danish architecture firm Nordarch to help turn the area into a duel recreational area—with a skate-able canal that can re-direct rainwater into bowl-like basins able to hold up to 10 swimming pool’s worth of water. The park will also contain a jogging path, fitness and play equipment, and leisure areas.

But what happens to the park when it rains? “The Canal itself empties rather quickly when the rain stops, and the particular water reservoir where the skatepark is placed, will only be filled approximately once every 10 years,” head designer Søren Nordal Enevoldsen explained to Wired. “That means the rain will almost never have an impact on the skatepark use.”

A Transformable House That Shifts and Adapts With The Weather

Called the Motus, this adaptive house is able to adjust to almost any environmental condition and local weather patterns. The house so far is just a concept design, but features solar panels powering “movable parts” that can automatically open and close, and even evaporate excess water, to keep the homes cool in the summer and dry in the wet seasons. The solar panels installed on the roof are able to power the house as well as its adjustable screens. The design “provides this flexible control over heat gain from sunlight,” said architect Todd Fix. “So if it’s a cold day, the sensor will sense that, and it will close both to keep the heat inside. If you want more light in the space, you can open up the screen or open up the shell.”

The Motus house includes several high-tech features meant to provide an environment that changes over time depending on the needs of the local weather. By not using thick, static walls, ceilings and floors, the home can adapt, in order to make it as efficient as possible. The movable parts of the buildings are lightweight despite their large size and can also be opened by hand. In addition to the sustainability-enhancing structural elements that wrap around the living space, the interior of the building includes a “microclimate pool” located underneath, which evaporates in the summer and cools the house.

In Beirut, Designers Turn The Ocean Into Energy

Recently architecture firm Najjar & Najjar Architects created IRIS, a kinematic pod installation that serves as both shelter and an energy-harvesting station. In addition to providing homes along coastal areas, IRIS also generates power via kinematic design that propels ocean energy through a network of cables to many homes in the area. The architects also created this design as a way to bridge the gap between traditional fisherman and less affluent coastal dwelling citizens, and the monolithic luxury high-rises that have sprung up along the shores. “IRIS is an attempt at resisting the expropriation of Beirut’s open coastline, returning the sea back to the fishermen and the local habitants of the Ras Beirut district,” says its designers. “Through architecture, it materializes the threshold condition between two very distinct, yet concomitant entities: the dense city and the open sea. Waves transform the kinematic structure into an experience of place and help harvest energy for the fishermen community.”

A proposed plan to keep the Maldives from sinking. Image via Waterstudio.nl.

Though you may not have heard of them, Dutch design studio Waterstudio.nl is the leader in floating architecture—and has made it their mission to help global slums tackle climate change and rising sea levels. By way of “floating functions” called City Apps, Waterstudio.nl's installations provide everything from additional housing, to sewage treatment, to spaces to grow food—while raising residents above perilous waters. This initiative has been so successful that the Netherlands-based studio was even granted the prestigious “Architecture & Sea Level Rise” Award 2012 from the Jacques Rougerie Foundation.

For a recent high profile project (seen above), the group turned their attention to the island nation of the Maldives. According to Inhabitat, “No part of the 1200 islands which make up the Maldives is more than six feet above sea level, so as sea-levels rise (as they will if rampant climate change is not stopped), the entire nation will be under water.” The Maldives government, in partnership with Dutch Docklands/Dutch Watervalley and Koen Olthuis of Waterstudio.NL, will now create several floating facilities for the islands—potentially saving the nation from total devastation.