Why India Needs Its Quack Doctors

A new plan to legitimize unlicensed medical practitioners can make a dent in the country’s healthcare woes. 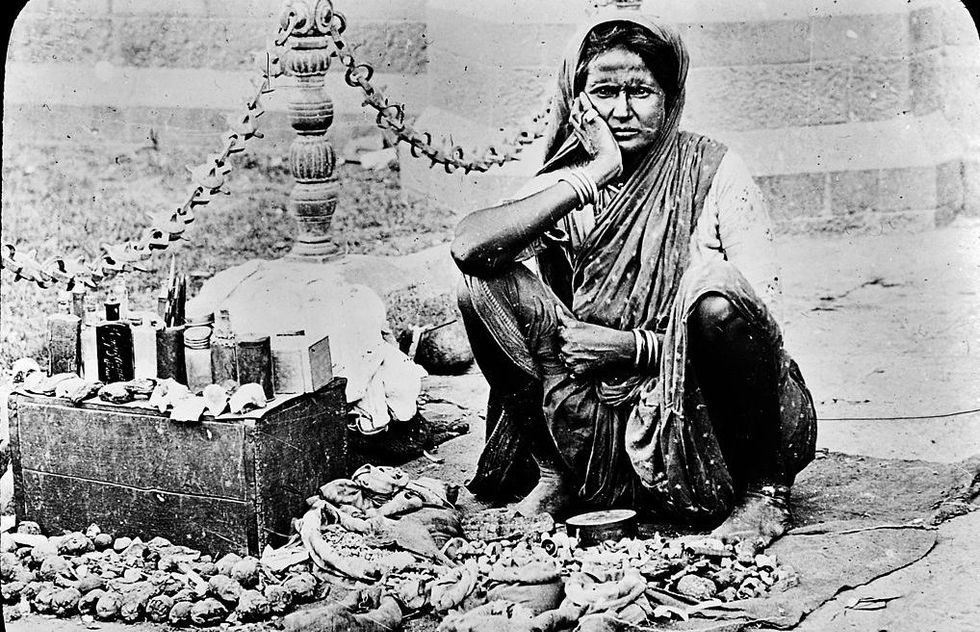 A quack doctor peddles medicine from a caravan. Image by Wellcome Images via WIkimedia Commons

Toward the end of last year, reports emerged that the Liver Foundation, a health NGO in India’s West Bengal state, had started working with local quack doctors. The term “quack,” descended from the Old Dutch word quacksalver, refers to fake or unscrupulous doctors and other snake-oil salesmen, so at first blush this kind of arrangement might sound like a bad idea. But the organization wasn’t employing or taking marching orders from phony doctors or folk-medicine pushers. Instead it had decided that these self-proclaimed practitioners could be leveraged for some actual public health good—by training them in real clinical skills, giving them legitimizing certificates, and using them to better administer basic care on a local level. These underqualified doctors could also serve as vectors, referencing patients to reliable advanced treatment as needed in remote areas. This co-optation of charlatans has been controversial. A number of Indian doctors have deemed the plan a risk to local health and a distraction from better ideas for healthcare provision in the country. But recruiting quacks into basic medical services is probably one of the best things India can do for its health services right now—if only as a stopgap on the way to larger reforms.

When we talk about quacks in Indian medicine, we aren’t talking about a few people with fake degrees or naturopaths misrepresenting their credentials here and there. According to the Indian Medical Association, up to 45 percent of all people practicing medicine in the nation have no formal training; as many as 700,000 of these dubious practitioners, with exaggerated or falsified credentials, even work in major hospitals. Quacks are most common in some rural areas, where they account for at least 70 percent of medical practitioners—and where the poorest people turn to them for up to 79 percent of their needs. Some of these quacks are total charlatans. Some are practitioners of traditional medicine. Some have partial or piecemeal allopathic training. But none of them have the medical degrees which make one a doctor under Indian conventions. And although some quacks are all but harmless, many have been implicated in cases of false diagnoses or overprescriptions leading to patient deaths—not to mention organ harvesting and darker phenomena.

India isn’t overrun with quacks because it’s a particularly guileless or corrupt nation. It’s just chronically underserved by legitimate doctors, especially in hard-to-monitor areas, creating a space for frauds. A nation of 1.25 billion with some of the world’s highest mortality rates from diarrhea, pneumonia, and tuberculosis, India has just one doctor per 1,700 people, according to the World Health Organization, which recommends that low-income nations have at least one doctor per 1,000. (Paradoxically, India is one of the world’s largest exporters of doctors, with tens of thousands of Indian-born physicians working in the U.K. and the United States.) Most of these doctors (up to 80 percent, by one estimate) are clustered in cities as well, whereas India is still a mostly rural nation. India’s public health spending per capita is among the lowest in the world by the United Nations’ reckoning, meaning that while some Indians have access to great private care, the majority of the country’s population is struggling with a system that is inadequate on almost every level.

A flyer for “medical services” in a public restroom in India, with before and after pictures. Image via Flickr user shankar s.

To make matters worse, even where rural and poor populations technically have access to legitimate doctors, they can’t count on actually getting care—or at least good care. Surveys of local clinics in India show that in some regions medical practitioners regularly skip out on their posts. In recent years, truly disturbing investigations have also demonstrated that many credentialed doctors are graduating from unscrupulous schools, which allegedly (and it seems likely) defraud national education regulators, take bribes, and lack sufficient staff or patients for doctors-in-training to prepare for real-life medical practice. This may be in part because of laws India passed in the ’90s, which made it easier to open private medical schools as the demand for doctors in the nation grew, but funding for public education remained scarce. Legitimate doctors are also often charged with negligence—although it’s hard to actually file and win a negligence lawsuit in India, especially if you’re coming from a poor background, which helps to perpetuate that particular problem.

In this context of chronic absenteeism and burnout amongst legitimate doctors (and considering the price of medical care in official contexts), locals have good reason to turn to quacks. And as long as they’re not seriously abusing the local population or killing people directly, sometimes these quacks manage to build a good local reputation by demonstrating care and devotion where the medical establishment does not, and by giving people access to basic, low-risk health services. Observers have noted that at least some quacks seem genuinely interested in helping local populations in underserved areas—even if they try to do so with dangerous knowledge deficits—and will try to recommend serious cases to more expert and legitimate medical practitioners.

Quacks have also been baked into local, rural contexts (and in some ways de facto legitimized) by India’s abject failure to enforce statutes against their practices. Quackery has been illegal in India since 1956, and some states take a very harsh line against it. These laws were affirmed and strengthened by anti-quackery court cases and legislation in the late ’90s, which better outlined the contours of medical fraud and the punishments it could incur. Yet quack practitioners’ local popularity, coupled with a lack of political will or resources, has led to lax enforcement of these laws and rulings. Unless you kill a ton of people, it’s widely known that it’s easy to get by as a quack.

Historical photo of a doctor selling medicines by the roadside. Image by Wellcome Images via Wikimedia Commons.

Recognizing all of these factors, and the fixity of quacks in Indian society, the Liver Foundation decided to appeal to quacks with goodwill by offering them training. The group’s Rural Healthcare Provider degree basically offers to turn quacks into paramedic equivalents. These Rural Healthcare Providers don’t have access to hard prescription drugs, but they can use, for example, basic life-saving antibiotics—and do so with a greater grounding in medical procedure and knowledge than most had before. The foundation argues that the program is in line with existing laws, effectively turning an illegitimate class of practitioner into a legitimate one whose activities can now be better controlled and documented.

This isn’t an entirely new idea. Back in 2008, local practitioners involved quacks in basic training on sexually transmitted infections to best get information to the public. Immunization and vaccination campaigns have also drawn on quacks. And for the past several years the southern state of Telangana has been working on (and last year made its latest bid to implement) a 1,000-hour training program for quacks in paramedical-level knowledge and procedures. This program and the Liver Foundation actually follow the precedents of older medical practices in India, which used to have two-tiered levels of medical education in some regions, allowing briefly educated practitioners to aid in basic sanitation and healthcare needs. The state killed this second class of practitioners around the same time it created its anti-quackery laws in the 1950s, arguing that they weren’t actually very helpful and a newly independent India would soon be able to train enough full-fledged doctors to handle national healthcare needs. (This two-tier system wasn’t just an Indian practice; for years China relied on rural locals with basic training to help its health development, with many going on to get more education and become legitimate doctors, contributing to what is today a fairly robust national healthcare system.)

The primary pushback to the Liver Foundation and similar NGOs’ efforts to co-opt quacks for good comes from the Indian medical establishment, which flat-out hates these ideas. The Indian Medical Association decries the Foundation’s work (as they have previous attempts to restore some kind of basic provider or mid-tier medical education system) as the legitimization of quacks and a strategy that distracts the nation from fixing underlying problems in the nation’s healthcare system by offering a paltry quick fix.

A street dentist in Bangalore. Image by Matthew Logelin via Wikimedia Commons.

Yet this critique rings a bit hollow. Observers like World Bank economist Jishnu Das have voiced their praise for the ideas and early results attained by the Liver Foundation and similar groups. And it just makes logical sense to engage with and use the potential of those quacks who are willing to do good. Some have discounted the medical establishment’s critiques as self-serving, a bid to maintain their position of importance and scapegoat quacks for all malfeasance in the Indian medical field—some of which is, of course, the fault of legitimate doctors who are unscrupulous or provide lousy care.

The notion that empowering quacks to become legitimate basic service providers cannot work seems to draw on an offensive zero-sum notion of human intellect, attention, and drive. There’s no reason to believe that such a system of local empowerment couldn’t be used as an initial stopgap in a larger, more holistic plan for healthcare. That’s not to say all quacks should be legitimized. Some should likely be punished via better enforcement of anti-quackery laws. But if India can, in the process of cleaning house, create a new class of provider bringing devoted, basic medical care to the places that need it most via well-supported co-optation programs, there’s no reason not to do so—although there may be reason to scrutinize the evidence and motives of opponents to such a plan.