Cori Bush calls for the expulsion of GOP lawmakers who 'incited' attack on U.S. Capitol 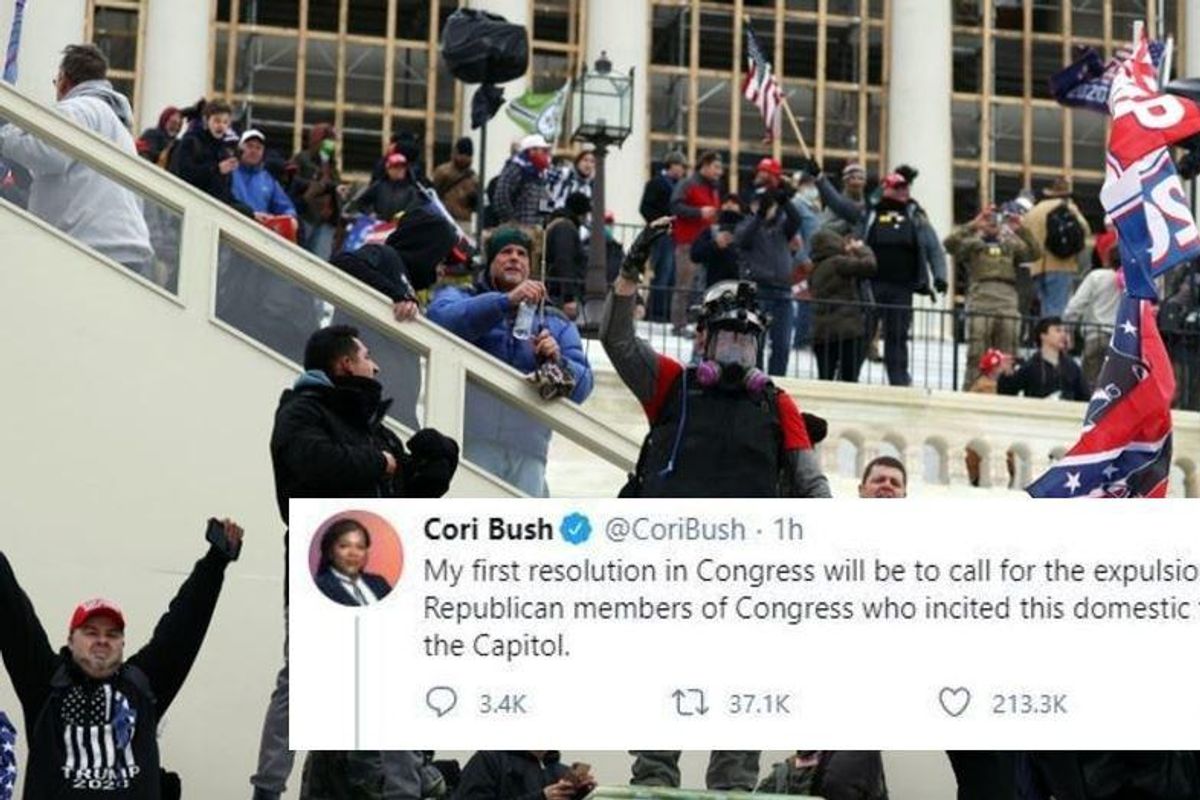 What took place in our nation's capitol today was the result of a long campaign by right-wing politicians and media to rile up Trump supporters into taking violent action against the government.

And now we have proof that it worked.

They got what they wanted, an insurrection. An insurrection based solely on lies that were spread just to placate the president's fragile ego. Everyone involved in this charade should be held responsible.

A woman was shot in the neck and killed in the melee. That cannot be forgotten in the debate over politics.

No one should be shocked about what happened. When you continuously tell millions of people that a national election was stolen due to a nefarious conspiracy, you're begging for violence.

Missouri Democratic Congresswoman Cori Bush tweeted that she doesn't just want these people who incited the riot to be silenced, but expelled from Congress altogether. "My first resolution in Congress will be to call for the expulsion of the Republican members of Congress who incited this domestic terror attack on the Capitol," she tweeted.

Bush is right. Those who inspired vicious mobs to rise up and ransack the capitol are just as responsible for their crimes as those who bashed in the windows.

Yesssss!!! Start with @tedcruz and @HawleyMO
They KNEW! THEY FUKING KNEW they were playing with fire and they did it anyway for political expediency! They should face consequences! Let us not repeat the same mistake we made after the Civil War! This must NEVER happen again!
— SBS (@Imjustshayeing) January 6, 2021

The interesting thing about Bush's tweet is that it is possible to expel the members of Congress who've pushed this election conspiracy.

Article I, Section 5, of the United States Constitution provides that "Each House [of Congress] may determine the Rules of its proceedings, punish its members for disorderly behavior, and, with the concurrence of two-thirds, expel a member."

Since 1789, Congress has expelled only 20 of its entire membership. 15 from the Senate and five from the House of Representatives.

The great majority of those expelled — 17 members — were removed from office for their support of the Confederacy in the immediate aftermath of secession. The most recent, was Representative Jim Traficant, Democrat of Ohio, who was expelled after being convicted on 10 counts of bribery, racketeering, and tax evasion.

Expelling the Trump sycophants who put their political careers before the democratic health of the nation, would help to heal and cleanse our diseased body politic.

Bush's tweet received a lot of support on Twitter, let's make sure everyone sees it, including those who have the power to expel those who are actively attempted to subvert our democracy.

Article 1 section 5 of the US Constitution allows each house to decide the qualifications of its members. Let us not forget the over 100 co-conspirators in Congress who should be expelled over their role in exciting this insurrection. So happy you are doing this!
— Michael Roderick (@MikeRoderickSD) January 6, 2021

Everyone, call your representatives and demand they support this resolution.
— Colin Hicks 😷 (@colinenpraxis) January 6, 2021

And prosecute every speaker from this morning's rally as accessories to domestic terrorism.
— That's Rev Ringside Seats at the Apocalypse to you (@provo_macher) January 6, 2021

From Your Site Articles
Related Articles Around the Web
2020 election
Trending Topics
THE DAILY GOOD
Start your day with something GOOD.
Trending Stories