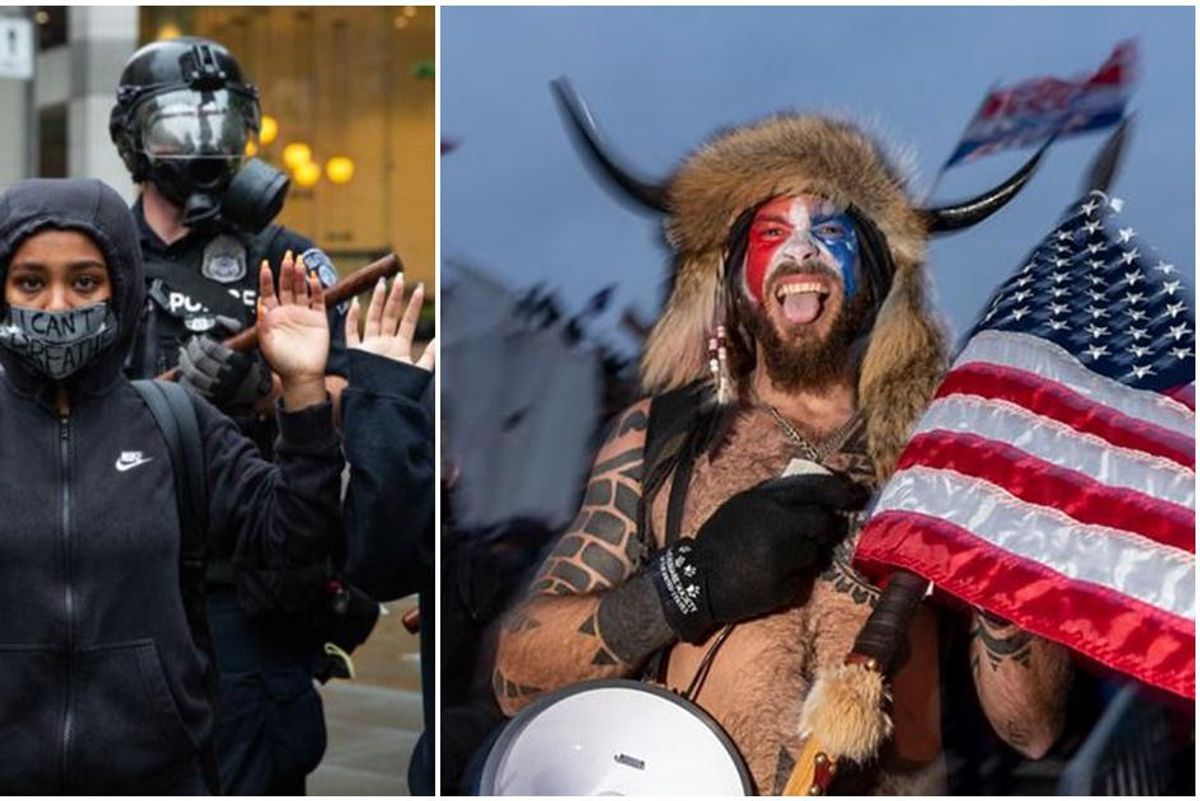 The 2016 election was the whataboutism Olympics. "Donald Trump defrauded people with Trump University? So what, The Clinton Foundation did blah, blah, blah."

Resorting to whataboutism doesn't mean you won the argument. It means you have no way to defend yourself, so you point the finger elsewhere.

This type of logic is flying high right now among right-wing commentators. Many are floating a major false equivalency by comparing the insurrection of Trump supporters at the Capitol on Wednesday to the property destruction that occurred during the summer's Black Lives Matter protests.

We heard this argument from Ben Shapiro.

Candace Owens made a similar comparison.

Fox News' Tomi Lahren chimed in with her whataboutery on Wednesday.

I am very disappointed in the acts of destruction/lawlessness at the Capitol today but for liberals to act like the… https://t.co/bR0fmdfbov
— Tomi Lahren (@Tomi Lahren)1609982288.0

Property destruction and violence should never be tolerated no matter who's involved. But what we break and why we break it is important. Being able to distinguish between the two events is crucial to learning from them. The more we shoo them away with whataboutism the further our country diverges from its ultimate desire to be a more perfect union.

This was an attempt to destroy the U.S. government

There is a big difference between looting a Target and ransacking the U.S. Capitol in an attempt to stop an election from being certified. One is an act of terror designed to bring down the basic fibers that tie our country together. If democracy is subverted, so are our laws, freedoms, and the ability to defend 330 million people from foreign invasion.

While we're not defending looting, the items in a brick-and-mortar retail store can be replaced and are not tethered to our shared sense of national democratic origin and purpose. If a Target and the U.S. Capitol are truly one and the same in your eyes, you might want to consult with your doctor.

This insurrection was based on conspiracies, not reality

The insurrectionists who ransacked the Capitol building came from a Trump rally near the White House. At the rally, the president claimed the election was stolen from him, although there is no evidence for his claim.

Anyone who's looked into the issue can plainly see that the president and his enablers were lying. They filed 62 lawsuits seeking to overturn election results in states the president lost, and only one was successful.

His lone victory didn't provide any credence for his claims the election was stolen.

"We will stop the steal!" Trump said when taking the stage. "We won it by a landslide. This was no close election."

"They rigged an election. They rigged it like never before," Trump said Wednesday.

Conversely, the Black Lives Matter protests were about something real. They were a reaction to the murder of George Floyd by a cop in Minneapolis. A brutal death we saw on tape. It was also about the deaths of Breonna Taylor, Ahmaud Arbery, and Eric Garner.

The protests were about the systemic police brutality that terrorizes people of color.

There is no disputing the fact that Black Americans are 3.23 times more likely than white Americans to be killed by police.

According to a report by The Daily Beasts' Will Sommer, who was on the ground at the Trump rally and ensuing insurgency, "every single attendee he spoke with raised the prospect of violence if they don't get what they want."

This stands in stark contrast to the Black Lives Matter protests that took place in hundreds of cities across the country. The protests were designed to raise awareness about systemic racism and to put an end to the undo violence against people of color.

The Black Lives Matter protests had no intention of being destructive and according to The Armed Conflict Location & Event Data Project, 93% of the 7,750 demonstrations in all 50 states and Washington D.C. were peaceful.

Reuters probably said it best on January 6: "Trump summoned supporters to 'wild' protest, and told them to fight. They did."

"Big protest in DC on January 6th. Be there, will be wild!" Trump tweeted, announcing the event.

Thousands of people showed up to the rally and he urged the angry mob of supporters to go to the Capitol building and influence lawmakers as they certified the election for Joe Biden.

"We're going to walk down to the Capitol and we're going to cheer on our brave senators and Congressmen and women," Trump told the crowd.

So he riled up thousands of people with lies and then directed them to take action against a group of lawmakers who were sitting ducks in the House chamber.

Trump's former Secretary of Defense, James Mattis put the blame solely on Trump's shoulders. "Today's violent assault on our Capitol, an effort to subjugate American democracy by mob rule, was fomented by Mr. Trump," Mattis said in a statement.

Republican Senator Mitt Romney agrees, saying the tragedy an "insurrection incited by the president of the United States."

The president essentially sent his minions to try and destroy the foundations of American democracy. There is zero equivalent in the destructive events that accompanied a small percentage of Black Lives Matter events.

On May 31, he wrote in a statement on Medium that protesting police brutality is "right and necessary" and "an utterly American response."

"But burning down communities and needless destruction is not," Biden wrote. "Violence that endangers lives is not. Violence that guts and shutters businesses that serve the community is not."

The argument that Black Lives Matter protests and the Capitol building insurrection are comparable reminds me of a saying that provides a great rubric for discussing political events.

Studies show that the death of George Floyd and the dialog it sparked in America had a dramatic effect on the perceptions of race. After the murder and protests, the percentage of white people who now saw race as a "big problem" increased three-fold.

This wasn't achieved by pointing a finger in the other direction, but by inspiring introspection and stoking greater societal urge to make things better.

If conservatives are going to learn anything from an event that exposed the danger that heated conspiratorial rhetoric is having on the country, they will need to take a good look at the culture they've created, not point to the events of last summer.

From Your Site Articles
Related Articles Around the Web
2020 election
Trending Topics
THE DAILY GOOD
Start your day with something GOOD.
Trending Stories