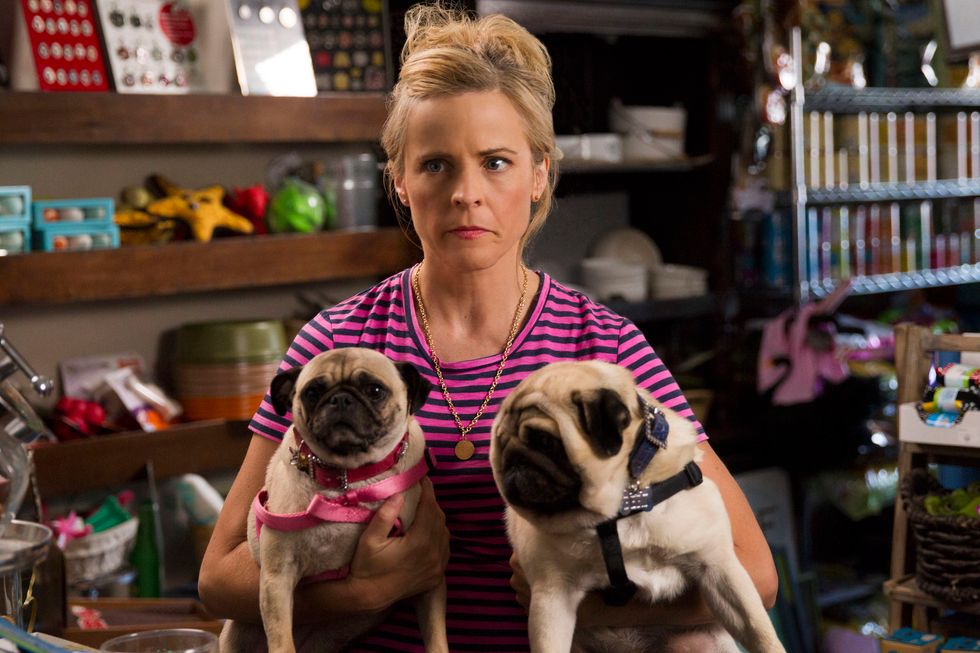 When comedian Maria Bamford’s new sitcom Lady Dynamite hit Netflix this summer, it was immediately hailed as one of the smartest, most subversive shows of the year by The New Yorker, the New York Times, and Rolling Stone. The time-hopping, fourth-wall shattering, occasionally surreal sitcom is every bit as silly, fragile, frenetic, and charming as the star at the center of it, turning Bamford’s real-life mental breakdown into laugh-out-loud comedy.

GOOD spoke with showrunner Pam Brady—the South Park writer who teamed up with Arrested Development's Mitch Hurwitz to create Lady Dynamite—about writing risky material, taking charge of our demons by turning them into art, and what it’s like to be an ambitious woman in America these days (with or without a mental disorder).

I have to confess, watching this show kind of makes me feel like I’m going inside Maria’s brain. Was it a conscious decision on your part to mimic the energy of her OCD or bipolar disorder, whether through pacing, the use of surreal imagery, or otherwise?

It didn’t occur to us until after we started showing cuts to people that we were simulating what it feels like to be mentally ill. I think it just came through from Maria—she’s able to do absurd surrealism with incredible poignancy. So that was definitely on our minds: How do we do a show that matches what's so unique about her?

[quote position="left" is_quote="true"]People are horrible most of the time, but there is hope; the good ones are out there.[/quote]

We knew we wanted to examine her breaking down and what it was like for her to build herself back up. And it seemed like the most efficient way to do that was just to jump around in time, and follow her lead. I think if you start with a character like Maria, who’s such an original—if you're just true to her, the rest will follow. Instead of going from the outside in, thinking, “Let's say something about OCD,” we started inside her head and went out from there.

I spoke with Jeff Szymanski, Ph.D., a clinical psychologist and executive director of the International OCD Foundation, who was very impressed by how sensitively mental illness is portrayed here. Unlike a lot of shows that reduce OCD to too much hand-washing or hoarding, he felt like you’ve got a really accurate representation of the disorder. He also loved, and I quote, that, “You don’t see Maria being bullied by her psychiatric symptoms, you see her turn the tables on them and put them in their place.” Did you have experts advising you about how to represent this stuff?

Maria was our expert—we were just drawing on her personal experience. But that always floated across our brains, like, “Hey you, is this a responsible thing to do? Having Maria relive the moment when her dog ate her pills?” Because that's one of many moments in the show that was drawn from her real life, but it was a pretty heavy thing to feel responsible for, her dog dying. It’s so brave of her to be willing to turn those moments into comedy. So, no, we did not consult with psychiatrists. We depended on Maria being open with us.

How did the writers’ room work, then? Did Maria come to you with ideas?

We wrote for about four months before production started, and we'd sit with Maria whenever she was in town, and just fire questions at her: “All right, what's a dating story? What was it like when you felt your worst? What was it like when you were the spokeswoman for Target?” And she would tell these stories where you couldn’t help but be like, “You did what?” Like in the episode “Josue,” Maria actually did volunteer at a school in Mexico that she thought was about helping kids in a small village learn English and better themselves. Then she realized later that the school was actually preparing them for factory work. We would spin those stories out and then pitch to her, shape it, have a back and forth.

Has Target been upset with how the show is representing them?

We haven't heard anything—and thanks to our legal department, we were very clever and called it Checklist. But Maria's been very vocal about them in her stand-up. Her OCD made her think obsessively about immoral things, so Target’s practices (real or imagined) became her fixation. She felt compelled to pursue social justice.

How did she discuss her time in the Duluth hospital with you? Those scenes are so dark, they’re even colored blue.

This is where we took some creative liberties because Maria never went to Duluth—she was hospitalized in Los Angeles. But we loved her relationship with her parents, so we wanted to involve them. Something Maria always pushed for—and I'm so glad she did—is, “Let's not make this the Patch Adams of mental health.” So this wasn’t the zany version of a psychiatric hospital. We go deep. I mean, those hospitals are depressing—she didn't feel safe there all the time because there's not a lot of funding for mental healthcare. She wanted to make sure that we made it bleak.

[quote position="right" is_quote="true"]We really wanted to capture how hard it is for the person who doesn’t have the illness. If your daughter’s head is messed up, then who is she?[/quote]

But you still managed to find a lot of humor in those scenes. How did you balance comedy vs. responsible representation?

We would just push it, and Maria was always a good judge for us, asking, “Does this feel true?” We never felt we nailed it at the time. I remember when we started shooting in Duluth and not being sure if it was gonna work. Luckily, Mitch was like, “This actually anchors the show.” And it turns out, I really feel like it did. Ed Begley, Jr. and Mary Kay Place really channeled Maria's real parents—Mary Kay spent a whole day with Maria's mom and they completely bonded. She really kind of captured that feeling of a mom’s hopelessness in that situation.

Maria has this story about how a nurse came up to her and said, “Don't worry, I won't tell anybody you’re in here.” She recognized her, I guess. And Maria’s like, “Um, I have no underwear on and I’m sitting here in paper socks. Do you think I give a shit about what you're going to say?” She was so aware, even in her despondent state, about how most people do not know how to behave. One of her friends really did visit her at the hospital and give her permission to to let go, at one point. But even though Maria really did want to die at that moment, she couldn’t help but laugh, because that’s just not what you say to someone who’s trying to get better.

What we really wanted to capture is how hard it is for the person who doesn’t have the illness, how her dad avoided talking to Maria because it was so scary. If someone's mentally ill, it's about identity. If their head is messed up, then who are they? What's their true self?

We keep talking about mental illness, but there’s so much more to the show, of course. I think anyone who’s ambitious, especially women, would identify with how conflicted Maria is about her need to stay healthy and her urge to pursue success.

Our society is crazy. You just need someone’s fresh eyes pointing out how fucked up it is. We’re showing that the world is crazier than Maria, especially Hollywood. All the characters we threw at her are monsters. I don’t know why it made us laugh so much, but everyone is so abusive to Maria and she never gives up. She has an optimistic view of humanity. People are horrible most of the time, but there is hope; the good ones are out there.

In the show, Maria has a life coach and a “loaf coach.” He’s a real guy. She went to a bunch of seminars he gave all about the art of doing nothing. And for Maria, who’s from a go-getter Midwestern family, the idea of just laying around is an act of degeneracy. She always felt like she had to be active. So she bought all of this guy’s books, and we were looking at his schedule and he's always traveling, always writing and giving more seminars. He’s the most ambitious loaf coach in the world.

But a lot of can us can identify with the idea that it’s exciting to maybe, some Sunday soon, purposefully not worry about work. Just hang around with your family. Have a picnic. The humor, of course, is in taking it to the nth degree. One of Maria's greatest comic qualities is her ability to overcorrect—if she feels like she’s been too ambitious, she’s like, “I’m gonna shut it down for three months and buy a beanbag chair.”

What does it say about me that I think that sounds nice?

I can send you the loaf coach’s info if you want.