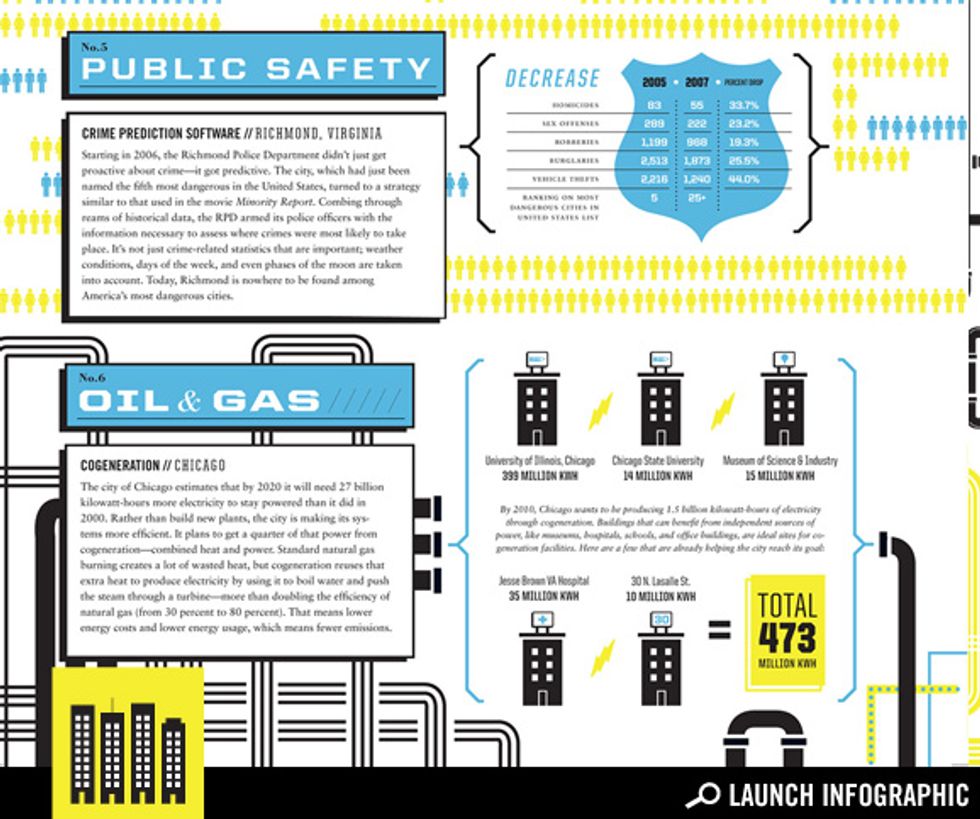 Starting in 2006, the Richmond Police Department didn't just get proactive about crime-it got predictive. The city, which had just been named the fifth most dangerous in the United States, turned to a strategy similar to that used in the movie Minority Report. Combing through reams of historical data, the RPD armed its police officers with the information necessary to assess where crimes were most likely to take place. It's not just crime-related statistics that are important; weather conditions, days of the week, and even phases of the moon are taken into account. Today, Richmond is nowhere to be found among America's most dangerous cities.

The city of Chicago estimates that by 2020 it will need 27 billion kilowatt-hours more electricity to stay powered than it did in 2000. Rather than build new plants, the city is making its sys- tems more efficient. It plans to get a quarter of that power from cogeneration-combined heat and power. Standard natural gas burning creates a lot of wasted heat, but cogeneration reuses that extra heat to produce electricity by using it to boil water and push the steam through a turbine-more than doubling the efficiency of natural gas (from 30 percent to 80 percent). That means lower energy costs and lower energy usage, which means fewer emissions. By 2010, Chicago wants to be producing 1.5 billion kilowatt-hours of electricity through cogeneration. Buildings that can benefit from independent sources of power, like museums, hospitals, schools, and office buildings, are ideal sites for cogeneration facilities.

A collaboration between GOOD and Oliver Munday.