Infographic: Will Japan Face the Next Debt Crisis?

All eyes are on the European financial crisis, but Japan's worrying debt load could put it in the on-deck circle for debt troubles. 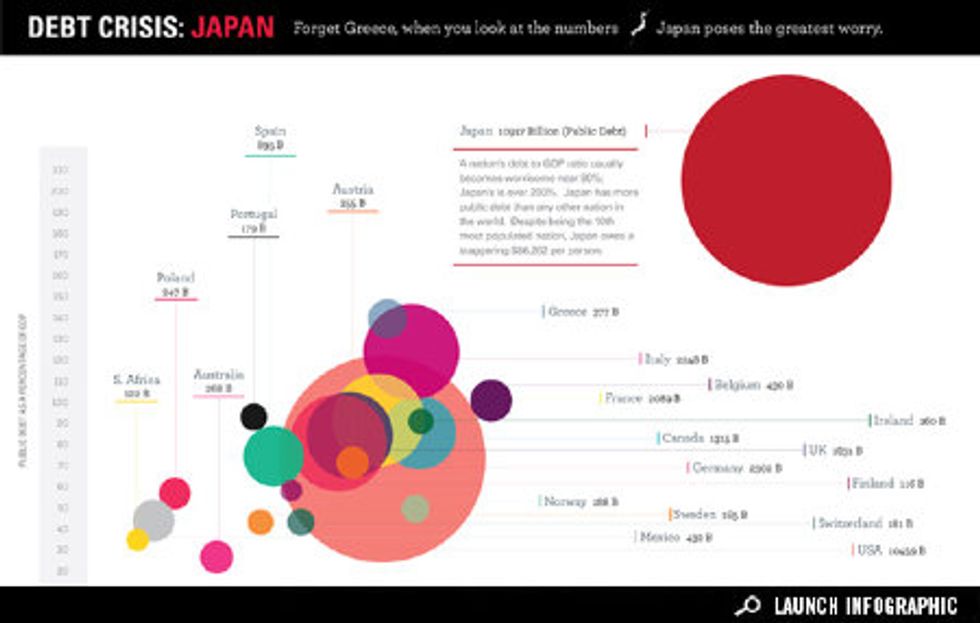 When it comes to our increasingly creaky global financial system, all eyes are on Europe, but this data visualization shows that maybe we should be paying more attention to Japan, where economic indicators are raising red flags.

In Europe, the continent's shared currency is under strain thanks to fears that countries like Greece, Italy, Spain and Ireland will be unable to repay their increasingly expensive public borrowing. That, in turn, puts pressure on governments to cut public spending and leading to fears of bank failures and tightening credit conditions. European leaders are being forced to adopt reforms and gather enough money to backstop stretched public treasuries as the rest of the world worries about what will happen to their workers and businesses if the whole thing goes south.

But Europe isn't the only place with high debt—in fact, Japan, the world's third-largest economy, has some of the same warning signs.

Sovereign debt crises are a product of a number of factors—loss of confidence in a country's political system and it's growth potential, rising interest rates, and overall debt load. Public debt isn't always the best indicator of a potential disaster (some threatened European countries were well managed fiscally before the current crisis, others were not) it's one of the key determinants of how difficult it will be to emerge from a crisis. If market jitters start to drive up the cost of maintaing a large debt load, it can kick off a vicious cycle: Interest rate payments force other public budget cuts or tax increases, creating slower economic growth and lowering the country's ability to pay.

Japan has suffered through nearly two decades of economic stagnation after a crash in the early '90s; combined with an aging population, the conditions led the country's government to borrow twice as much money as their economy is actually worth. While the country has been able to maintain its stability thanks to low costs of borrowing—Japan is still an important player in the global economy—financial contagions have a way of spreading. If the country's recent political chaos, which has seen it switch Prime Ministers three times in the last two years, combines with global fears about the quality of sovereign debt in Europe and the United States, Japan could very quickly find itself as the next stop on the financial crisis world tour.

This infographic is a collaboration between Glassman Wealth Services and Elefint Designs, a strategic design firm working with good causes. Infogra.ph is a project utilizing custom infographics and data visualizations to shed light on important topics and promote organizations doing social good.