The NBA Does Everything Right On Social Media. The NFL Does It All Wrong

Letting players be hilarious, fun and diverse is the lesson here. 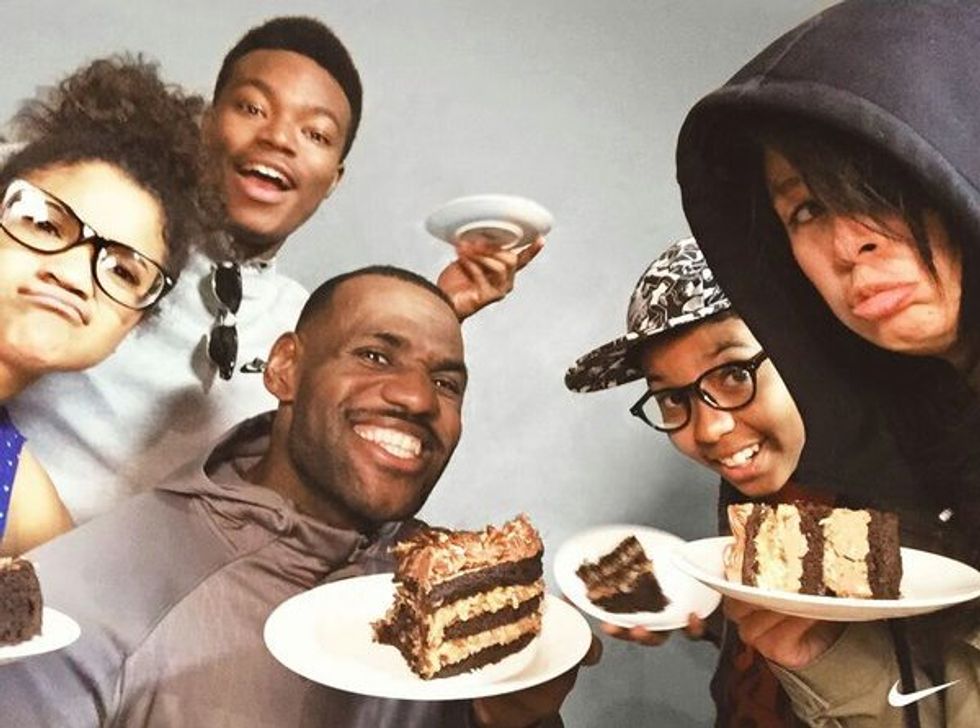 But most fans remember the Greek transplant from a tweet he posted during his rookie season in 2014.

The viral post launched Antetokounmpo into stardom and highlighted how the NBA has empowered players to be themselves on social media, finding a way to showcase the leagues’ diversity and personalities in the process. The NBA understands that the best basketball players in the world playing basketball in a vacuum has a finite draw over an 82-game season. The league’s social media strategy and its convivial embrace of the internet has allowed for a world of characters, motifs, and running jokes. LeBron James’ candid Twitter account rebuilt his charisma after “The Decision” polarized fans. DeAndre Jordan’s free agency flip-flop in the summer of 2015 was regarded as an embarrassment until everyone in the league jumped into an emoji war. Steph Curry’s virality has made the Warriors appointment national television for the past three years; each 30-point game spawns a dozen arresting video clips that are shared until inescapable. And the Atlanta Hawks used German rookie sensation Dennis Schroder for this hilarious video.

The NBA’s successful online strategy highlights the NFL’s total lack of a cogent social media standard. Last year, the league prohibited teams from posting original in-stadium content. The fines start at $25,000, which is more than what the league levies for illegal hits or headhunting. Aaron Rodgers creates trendable content as frequently as Curry, but only a few select pages are allowed to be posted.

This disparity is translating to the way modern fandom is performed and sustained. The NFL’s military-style austerity has created an internet culture that only exists by formality. Team accounts are brazenly corporate or vapid and tone-deaf, creating a dearth of unique celebrities and magnetic stars, which might help explain why NFL ratings are down. The NBA, meanwhile, continues to enjoy a surge in popularity. Its cultural dominance in Europe and Asia is the stuff of Roger Goodell’s dreams. Its understanding of young adult vernacular and behavioral patterns has created loyal online communities. Even public stumbles manage to enhance the product: The Sacramento Kings’ Twitter account spoofed the Cavaliers with this Photoshopped logo in January. When told to cut it out, the account sent Will Ferrell GIFs and fire emojis to the Hawks by way of a smarmy “compliment war.”

“Speak the language of the people that are following you,” says Dan Kozlak, the analytics director at Navigate, a Chicago-based sports market evaluator. “It takes a lot of research to see who gets engaged on what kind of platform. The more you put into it, the more you’re going to get out of it.” A recent Navigate study found that among professional sports social media accounts, followers of the NBA, NHL, and MLS felt most connected to their favorite teams.

Richard Ayers, a former head of digital at Manchester City Football Club and current CEO of London-based consultancy Seven League, believes that the differences can be attributed to risk management styles.

“If you’re a sports communications director, 90 percent of your job is defending, keeping the press away from the players. It’s stopping the gossip stories, the financial stories, whatever stories they are. Your job is to quiet it down. For them, having a bit of flavor, a bit of fun, it’s risky.”

For the NFL, those stories comprise botched domestic violence suspensions, disputes against chronic traumatic encephalopathy research and the alleged blackballing of Colin Kaepernick. The NBA, at least comparatively, has been scandal-free.

According to Ayers, the NFL adopted its semblance of an editorial voice just three years ago. We’re already seeing the consequences. Forbes’ 2016 ranking of the best athletes on Twitter is topped by LeBron James, Steph Curry, and Kevin Durant. Four of the top 10 ranked accounts belong to NBA players; zero belong to NFL players.

The NFL’s reticence is going to become more consequential as social media omnipresence carves the road to international product development. Aside from a (super misleading) breast cancer awareness campaign every October, it’s hard to recall an instance in which the NFL celebrated something beyond hegemonic white American masculinity. The NBA’s digital initiatives for the Chinese New Year, Black History Month, “Latin Nights” and Summer Olympics allow the game and its concomitant cultures to make sense overseas.

Ayers says that the international branding equation will take a while to solve. In that case, the NBA’s enjoying a crucial head start.

“As certain teams become more of a global trend, like the Warriors or Celtics, you have to remember that all international marketing still goes through the NBA itself,” he says.

Soon, the league can begin experimenting with editorial and stylistic strategies for certain team accounts. They can continue taking risks and getting creative. Ayers’ Seven League colleague Lewis Wiltshire, who was formerly Twitter’s U.K. senior director of media, says that the Houston Rockets team accounts have emerged as darlings of the world marketing industry. It’s no coincidence that the Rockets have also assumed the title of “China’s Team.”

The two biggest social media stories of the past NFL season were disciplinary affairs. Antonio Brown was investigated for streaming to Facebook Live in the Steelers’ locker room. Odell Beckham Jr. was eaten alive for posting a photo on a yacht six days before the Giants’ playoff matchup with the Packers. Not that the NBA avoided social media scandals, either. Draymond Green accidentally showed everyone his penis on Snapchat. Hell, those beloved Houston Rockets had to fire a social media manager just two years ago for pretending to shoot a horse with emojis. The NBA’s flops lack permanence, though, because social media is a fluid, clumsy mode of personal expression. When the NFL acts robotic in order to promote an airtight product, the zeitgeist has no idea how to handle the real human errors. That self-seriousness benefits no one. Now, as the league faces two objectionable franchise relocations and a lawsuit for allegedly ignoring federal drug laws, it will need to get serious about a bit of rebranding. Maybe it’s time to take a cue from the success of its rival sport and to let its athletes be the best ambassadors. The league can start by letting them be themselves.