NFL Owner Promised Players Would Stand For Anthem But Then Backtracked

Behind closed doors, the Dolphins and Texans promise to enforce standing. 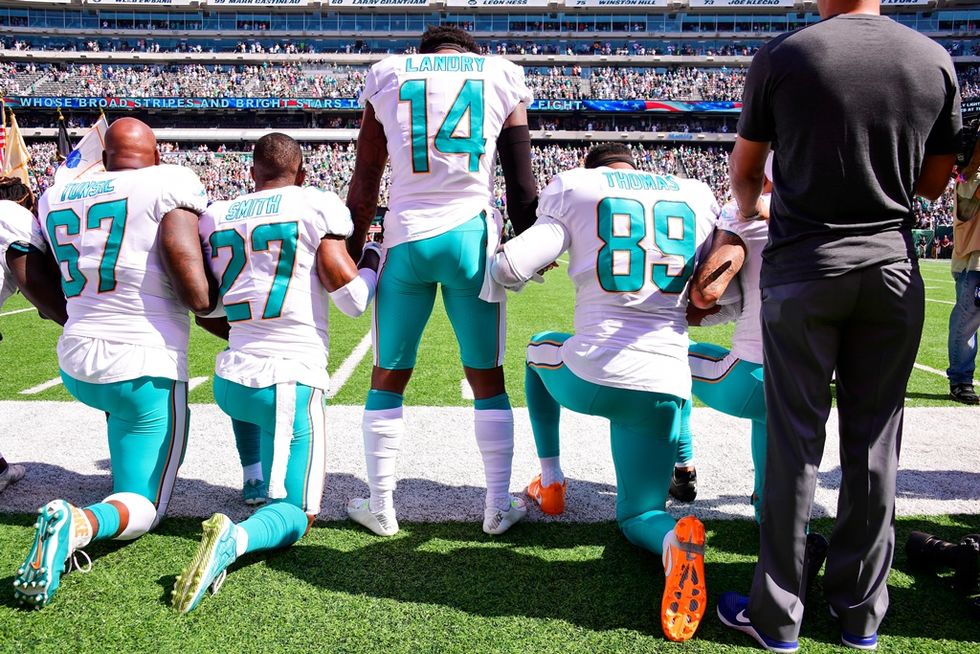 It took a single day for Miami Dolphins owner Stephen Ross to backpedal from his promise to put an end to player protests of systemic racism and police brutality.

On March 5, after receiving a lifetime achievement award from the Jackie Robinson Foundation, Ross told the New York Daily News that unlike last season — when Julius Thomas, Michael Thomas, and Kenny Stills took a knee — anyone wearing a Dolphins uniform would stand during the national anthem in 2018. Exactly how Ross planned to enforce this mandate — since there is no hard and fast NFL rule regarding anthem-specific behavior — was left unsaid.

Just a year ago, Ross was quoted as seemingly supporting the players: “I think everybody here, our team and our whole organization, respects the flag and what it stands for, the soldiers and everything.”

But since President Donald Trump started calling anyone who protested a “son of bitch” who should be booted from the field, Ross has pivoted 180 degrees, now convinced the players’ actions were somehow unpatriotic.

“When that message changed, and everybody was interpreting it as that was the reason, then I was against kneeling,” Ross told the Daily News on March 5. “I like Donald. I don’t support everything that he says. Overall, I think he was trying to make a point, and his message became what kneeling was all about.”

“From that standpoint, that is the way the public is interpreting it,” he continued. “So I think that’s really incumbent upon us to adopt that. That’s how, I think, the country now is interpreting the kneeling issue.”

It goes without saying, but that logic is utter bunk. While a good chunk of the U.S. population has interpreted the protests in the way Ross suggests, that doesn’t make it true. Perception is not reality no matter how many bad-faith arguments are offered by Trump and the right-wing media ecosystem. The protests are not an insult to the flag nor to those who have served, full stop.

But Ross has either fallen for the ongoing campaign to warp and deflect from the players’ actual message(s) — one that’s been waged ever since Colin Kaepernick kicked off the most prominent spate of honest-to-goodness collective activism from NFL players in recent memory — or his initial comments about the protests and social justice were a convenient falsehood.

On March 6, Ross backtracked and foisted blame on the Daily News, saying in a statement to the Florida Sun Sentinel that he had been “misconstrued” and that he had never claimed he wanted to force the Dolphins to stand. Ross added that while he remains “passionate” when it comes to social justice issues, he’d simply told players that kneeling is, in his opinion, “an ineffective tactic that alienates more people than it enlists.”

The Daily News, in its defense, then posted an audio interview in which Ross can be clearly heard saying, “All of our players will be standing.”

This isn’t the only NFL team in the spotlight for the national anthem. Just days before Ross’s statements, two unnamed NFL agents told the Houston Chronicle that the Texans would refrain from signing any and all free agents who had dared to kneel or raise a fist. That announcement, however, wasn’t something openly discussed by the Texans’ front office but rather reflects a general understanding of team owner Bob McNair’s wishes.

“There many who believe if McNair could field a team with all-white, all-conforming, all-pro talent, he would,” the Chronicle reported March 3.

In a statement, the Texans described the Chronicle’s reporting as “categorically false and without merit,” promising that activism has no impact on their free agency evaluations. The National Football League Players Association also chimed in:

The NFL free agency for 2018 kicks off on March 12. Perhaps some of the league’s brighter stars will keep these kinds of stories in mind when deciding where to ply their trade.