Smog-Eating Bikes Are About To Take On Beijing

A clever design fix may start cleaning up one of the world’s most polluted cities by the end of this year. 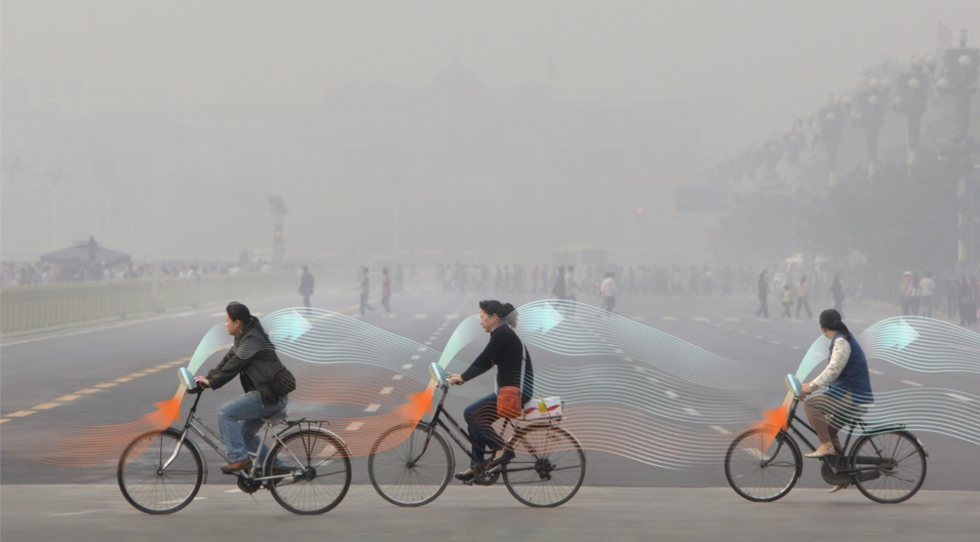 All images via Studio Roosegaarde.

If one design firm can pull it off, cyclists in Beijing may soon double as mobile air filters. Holland’s Studio Roosegaarde has developed anti-smog bicycles and the first prototype is expected to hit the Asian city’s congested streets as soon as the end of this year, according to Quartz.

Beijing is one of the world’s smoggiest cities, regularly enveloping its residents in soupy clouds of pollution, as seen in this eerie time-lapse video captured by engineering consultant Chas Pope earlier this year.

Here’s how the bikes work: A device installed near the handlebars of the bike sucks in smoggy air and filters out particulates like soot or dust, clearing the way for what will essentially be a bubble of clean air right in front of the rider.

The bikes are still in the planning stage, so their effectiveness has yet to be put to the test, but it’s possible that this air-filtration system could benefit more than just the cyclist who rides it. With Roosegaarde’s partner bike-sharing service Ofo providing access to over 6.5 million bikes in Asia and the U.K., a lot of air could end up running through those filters.

This is not the first anti-smog tech Roosegaarde has trotted out. In 2016, Beijing received Roosegaarde’s Smog Free Tower, a 22-foot-tall cigar-shaped construction that can filter a million cubic feet an hour (with much of the particulate matter repurposed as fashion accessories). Other designers have experimented with vertical forest towers or highway canopies to reduce smog.

If these bikes deliver on their promises, the United States may end up clamoring for them as well. Though China’s smog is world-famous, air pollution is still a problem the United States: Thousands in the U.S. die from it every year. And many more are at risk of getting sick, thanks to the Trump administration’s attempts to delay or even roll back air pollution standards — not to mention, defund the EPA and increase the use of coal, which is one of the dirtiest energy sources out there.

China, meanwhile, has been making efforts to reduce the nation’s coal consumption and has invested heavily in renewable energy. They understand that the best way to avoid smog is to not produce it in the first place. In the meantime, these bikes, towers, and other ideas may help.