A third woman just came out with new allegations against Brett Kavanaugh.

A third woman has accused Supreme Court nominee Brett Kavanaugh of sexual assault, and the allegations are devastating and disturbing.

A third woman has accused Supreme Court nominee Brett Kavanaugh of sexual assault, and the allegations are devastating and disturbing.

Julie Swetnick has sent a sworn affidavit to the Senate Judiciary Committee, via her lawyer Michael Avenatti, who also represents Stormy Daniels.

Here is a picture of my client Julie Swetnick. She is courageous, brave and honest. We ask that her privacy and tha… https://t.co/EBdh6Rzbjo
— Michael Avenatti (@Michael Avenatti) 1537973077

Below is my correspondence to Mr. Davis of moments ago, together with a sworn declaration from my client. We demand… https://t.co/W07DcY6bKq
— Michael Avenatti (@Michael Avenatti) 1537972955

Swetnick, who has worked for the federal government and holds active clearances associated with the Department of Treasury, writes that she knew Brett Kavanaugh and his friend Mark Judge while they were in high school.

“I attended well over ten house parties in the Washington, D.C. area during the years 1981-1983 where Mark Judge and Brett Kavanaugh were present,” she writes. “On numerous occassions at these parties, I witnesses Mark Judge and Brett Kavanaugh drink excessively and engage in highly inappropriate conduct, including being overly aggressive with girls and not taking 'no' for an answer. This conduct included the fondling and grabbing of girls without their consent.”

In addition to writing that she “observed Brett Kavanaugh drink excessively at these parties and enage in abusive and physically aggressive behavior towards girls,” she mentions having seen him at a string of parties known as “Beach Week.” Incidentally, Kavanaugh records having been at Beach Week in the calendar he turned over the Senate to try and clear his name.

Avenatti's client Julie Swetnick says she observed Kavanaugh as a "mean drunk" harassing women at parties, including at "Beach Week" in Maryland.

The 1982 calendar he released today indicates he was at Beach Week. pic.twitter.com/NgJJ4CwE6d

Here is where things go from terrible to worse.

Swetnick writes that she witnesses “efforts by Mark Judge, Brett Kavanaugh and others to cause girls to become inebriated and disoriented so they could be ‘ gang raped’ in a side bedroom by a ‘train’ of numerous boys. I have a firm recollection of seeing boys lined up outside rooms at many of these parties waiting for their ‘turn’ inside the room. These boys included Mark Judge and Brett Kavanaugh.”

She adds that in “approximately 1982,” she became a victim of one of these rapes where Judge and Kavanaugh were present. Swetnick adds that after the incident, she shared her story with at least two other people who can testify.

“During the incident, I was incapacitated without my consent and unable to fight off the boys raping me,” she writes. “I believe I was drugged using Quaaludes or something similar placed in what I was drinking.”

Although it feels like years ago, it was just yesterday that Bill Cosby was sent to prison for drugging and raping Andrea Constand.

Kavanaugh and Professor Christine Blasey Ford are scheduled to testify tomorrow before the Senate Judiciary Committee, with a vote slated for Friday morning.

Here is the full affidavit submitted by Swetnick under threat of perjury. As someone with a security clearance, submitting this document puts her career on the line. 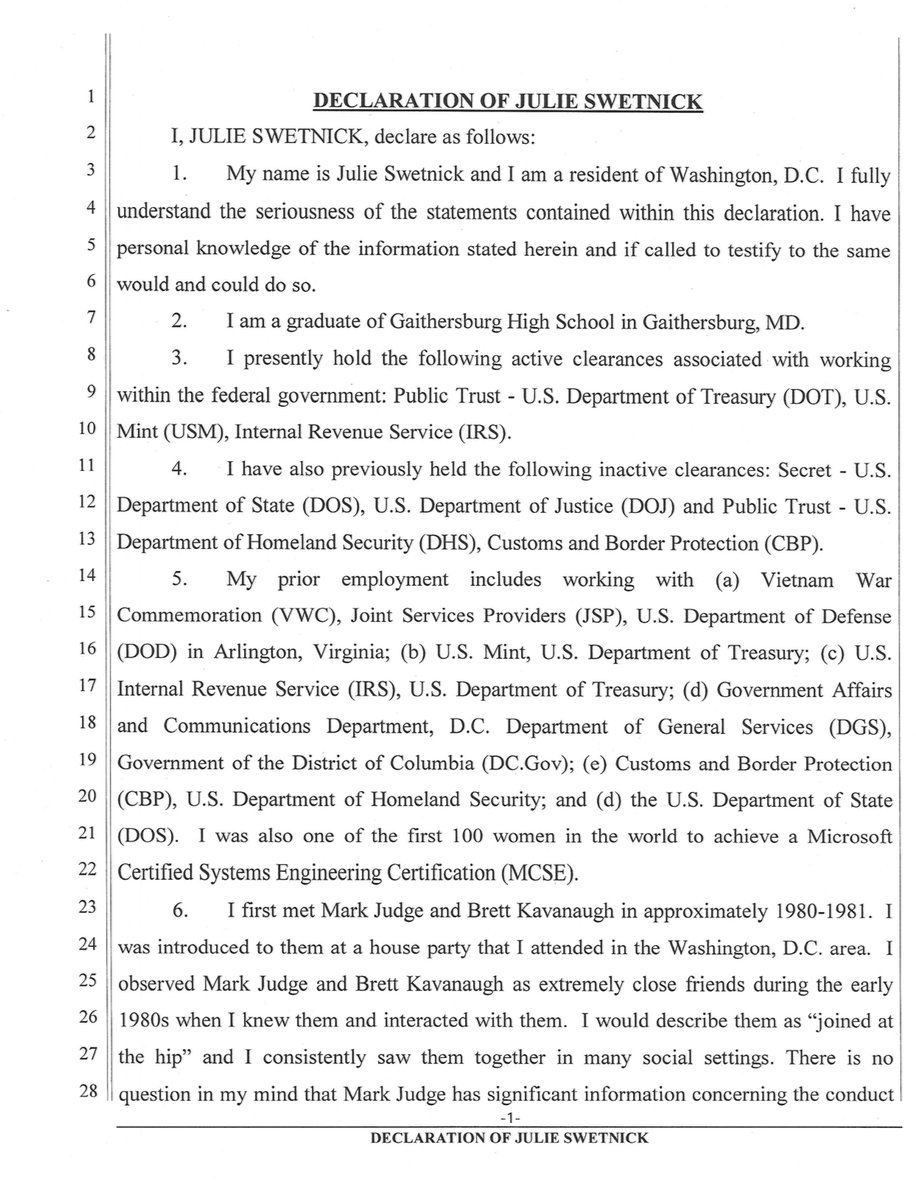 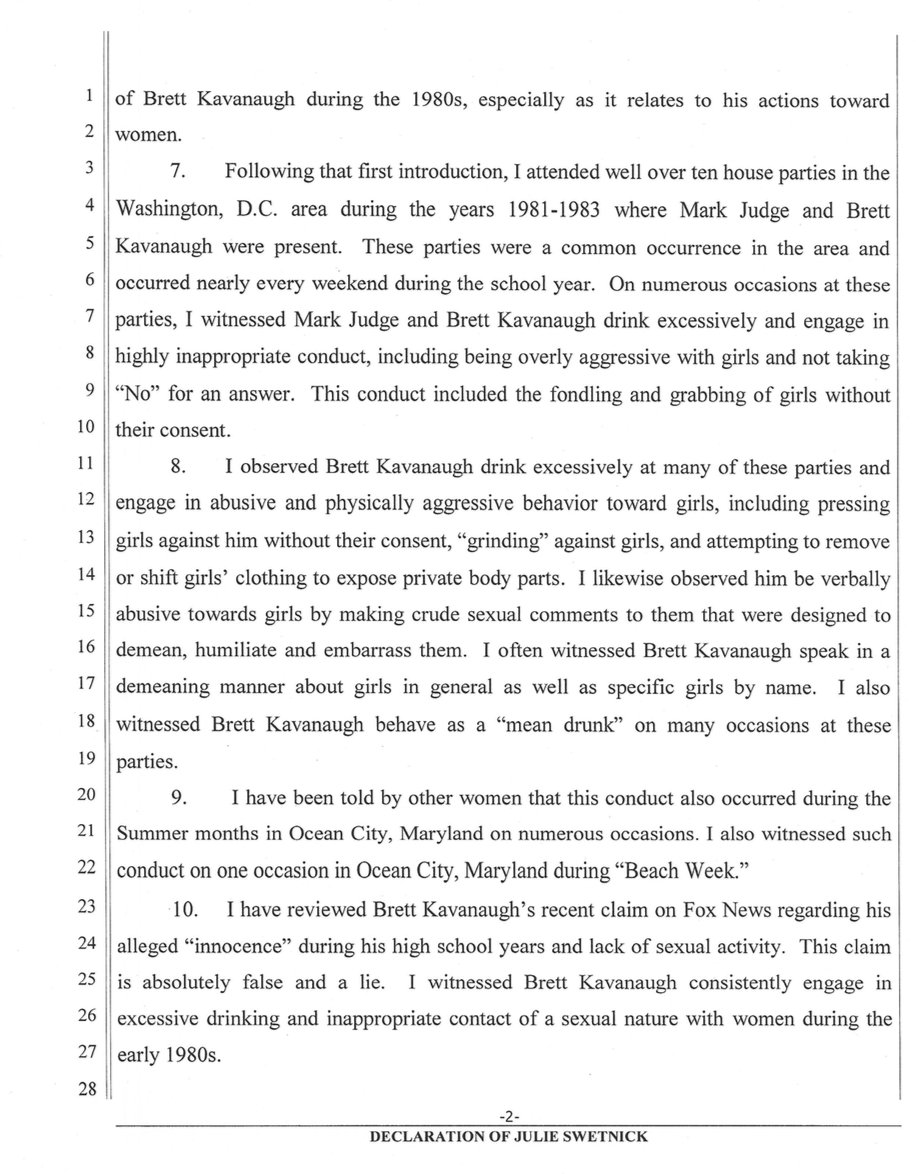 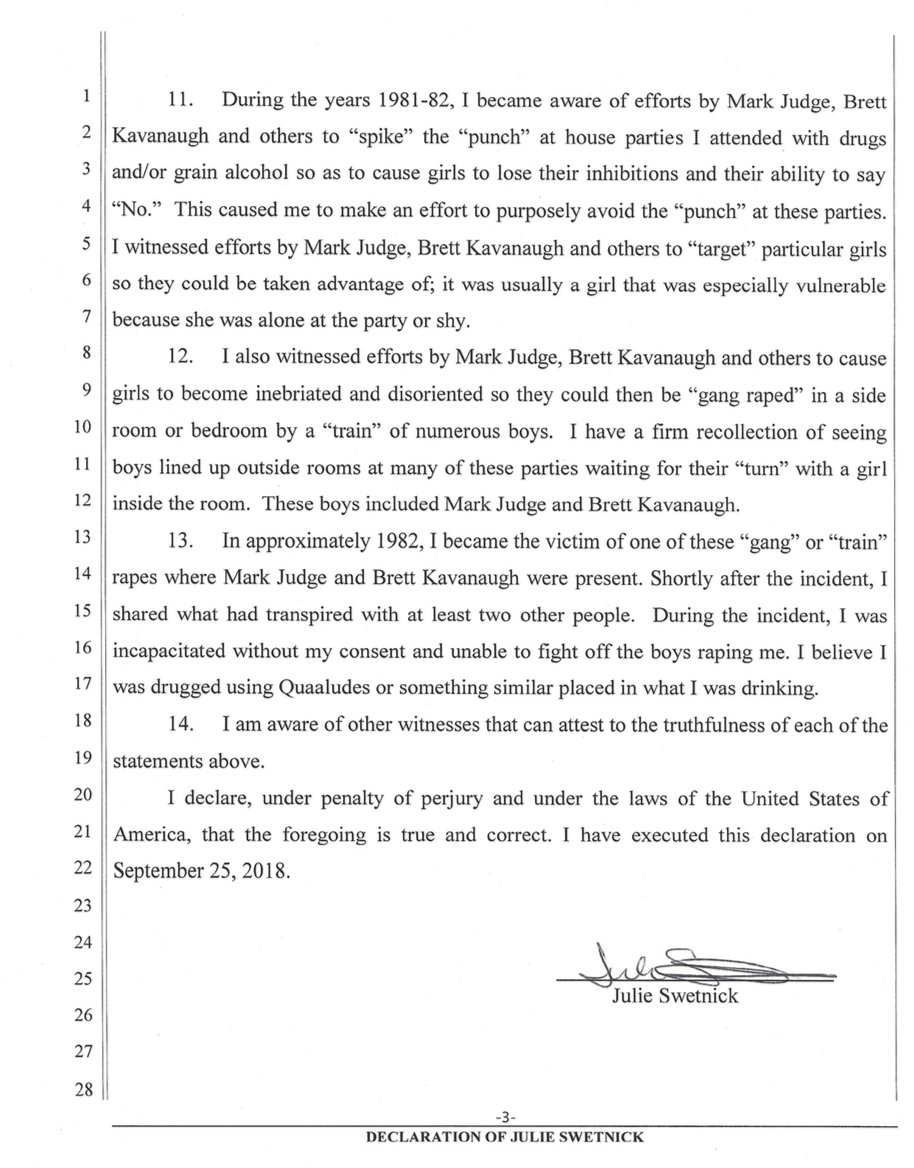