‘The advice he gave me was from his heart’ 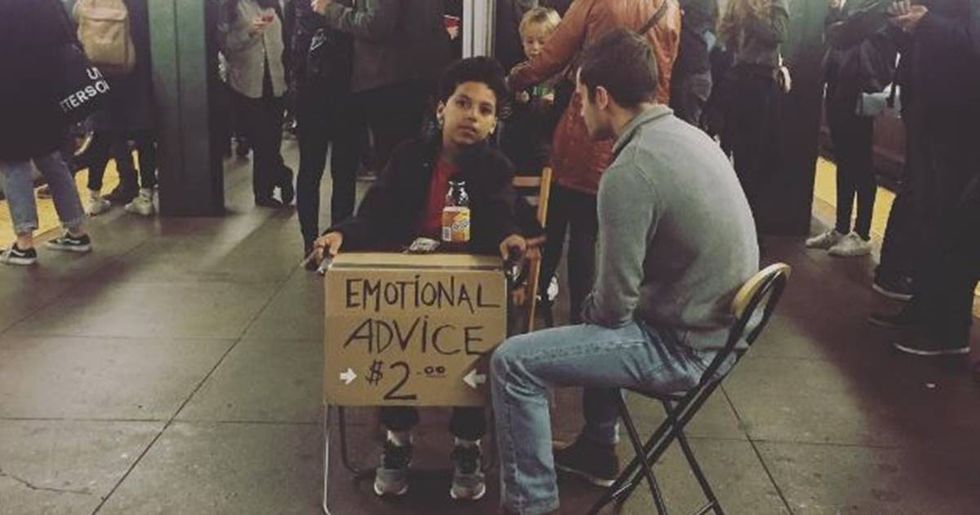 The hustle and bustle of the New York City subway is the last place on Earth that most people would look for emotional support. But these days, commuters on the L train are getting it from an unlikely source, 11-year-old Ciro Ortiz. Every Sunday afternoon, Ciro, also known as the Emotional Advice Kid, sets up a table with a sign that reads “Emotional Advice $2.00,” and provides stressed New Yorkers with five minutes of therapy for just two dollars.

“He’s had a very powerful moral scope since he was little. He had a passionate perspective about anything, especially when it had to do with like relationships or how people behave,” Adam Ortiz, Ciro’s father, said. Young Ciro even takes his community support a step further by donating his weekly proceeds, usually about fifty dollars, to his classmates who can’t afford lunches.

Ciro came up with the idea of helping people in the subway after experiencing emotional distress from being bullied at school. Now he pays it forward by helping strangers cope with their emotional issues. “I help people with their problems, because a lot of people, sometimes they feel sad or they feel angry for particular reasons. Maybe they’re in a relationship or maybe they’re not getting along with their family, or maybe just growing up and they’re feeling nostalgic,” Ciro said.

“He really listens to you and he really looks at you...also he’s not trying to make an answer that sounds appealing to you, he’ s trying to be very focused and very honest,” Ashley, one of his clients, said. “I mean he’s a kid, he’s so beyond his years, the advice he gave me was from his heart.” Ciro sees himself as a ray of hope among the stress of city life. “The most rewarding part is actually making an impact about how people feel about themselves and other things,” Ciro says. “Just seeing the stand might give them hope for something.”

Looking for some advice on love and life? Ciro is usually in the Williamsburg L train line on Sundays from 12 pm to 2 pm or 2 to 4 pm. Please bring cash, Ciro isn’t accepting insurance at this time.