An Artist Is Battling ISIS Hate Speech Using Only A Paintbrush 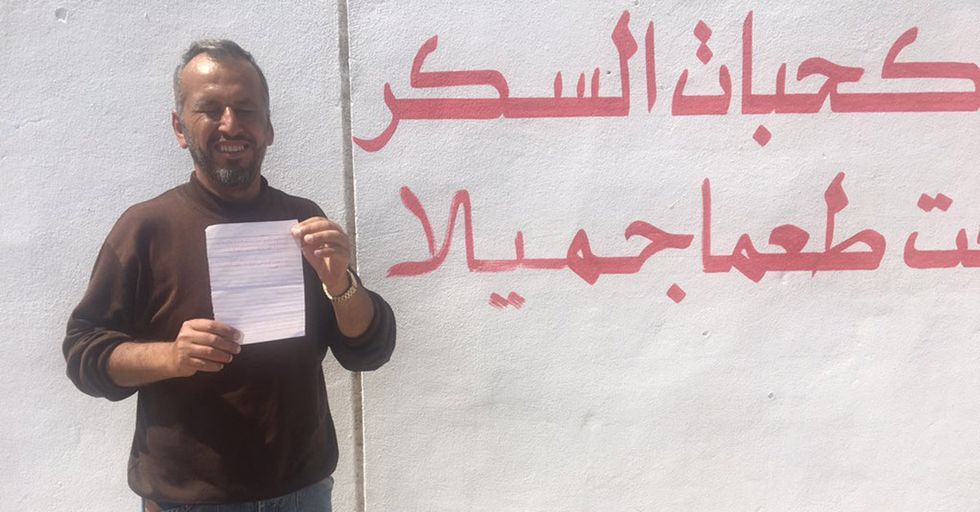 ISIS propaganda in Islamic countries isn’t just confined to the airwaves or print. Every day, citizens walk down streets that are marred with hateful graffiti espousing intimidating and vulgar rhetoric. Not only is it a blight on city landscapes, but the vandalism serves as a powerful reminder of the intolerance and violence that has permeated peaceful cultures.

However, as cities are liberated from the occupation of the Islamic state, residents are taking back their walls and their streets, painting over the messages left behind by occupying forces.

But Sadoun Dhanoun of Mosul isn’t just erasing the messages of hate—he’s replacing them with more progressive, loving missives. The New York Times reporter Rukmini Callimachi encountered Dhanoun in action and published a brief version of his story on Twitter, shown below.

1. All over liberated areas of Mosul, 1 of the 1st things people are doing is painting over ISIS graffiti. Some are… https://t.co/DBasfBmJEE
— Rukmini Callimachi (@Rukmini Callimachi)1492254843.0

2. Today I noticed this man across the street, carefully stenciling a message on this freshly painted wall. So we s… https://t.co/CBfdqzVdUi
— Rukmini Callimachi (@Rukmini Callimachi)1492254922.0

4. This wall here used to be painted with a verse from scripture calling for violence against the kuffar, or infide… https://t.co/dUOkfmxAGY
— Rukmini Callimachi (@Rukmini Callimachi)1492255345.0

9. He says he's almost done with this wall and he proudly posed with the quotes & his freshly painted sign. Next he… https://t.co/QKlXYFWe1w
— Rukmini Callimachi (@Rukmini Callimachi)1492256031.0

Mosul has been free of ISIS occupation only since January, but other areas of Iraq are still fighting off their forces. It’s unlikely that Dhanoun’s optimistic graffiti will change the nature of the battles, but hopefully it will inspire those in his city to pick up the pieces quickly and also help ensure that something like this never happens again.