After receiving hundreds of Nazi death threats, Jewish comedian found a way to turn it into a positive.

“We don’t want to work at Hobby Lobby.” 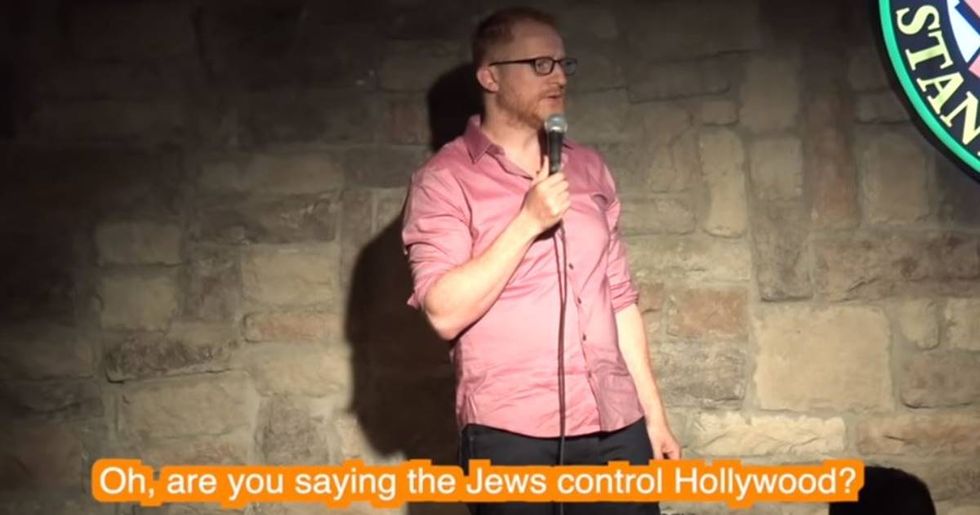 Comedian Steve Hofstetter is the Senior Comedy Correspondent for Fox Sports, has over 100 million views on YouTube, and is best known for viral videos where he shuts down hecklers.

Hofstetter also happens to be Jewish and one of his epic clap-backs at an anti-Semitic heckler went viral for the way he shut the bigot down. Unfortunately, it also captured the attention of anti-Semites and eventually led to an FBI investigation.

It started on March 22 during a set in Vancouver, British Columbia. Hofstetter was doing a routine about the white supremacist rioters in Charlottesville, Virginia who chanted, “Jews will not replace us.”

“What the fuck job do you have that you’re worried that Jews are comin’ for ya? We don’t want to work at Hobby Lobby,” Hofstetter asked the audience.

“T.V.” a heckler responded, alluding to the bigoted assumption that Jewish people run the media.

“T.V.? Oh, are you saying that Jews control Hollywood? Because you can leave,” Hofstetter responded. “If you want to interrupt me with anti-Semitism, get the fuck out of the show. Oh, did you not get the laughs you thought you were going to get?”

After a few words back and forth, Hofstetter got the heckler to clarify what he meant.

“Jewish people control T.V. and they do a great job of doing it,” the heckler backpedaled.

After the clip, Hofstetter said that the group of people the heckler was sitting with apologized to him and the staff for their friend’s behavior.

Hofstetter uploaded the video to YouTube, where it received a lot of attention, but not the kind anyone would want. Bigots across the globe began sharing the video and Hofstetter received over 3,000 hateful comments and 252 death threats.

Hofstetter then forwarded the emails to the FBI to investigate as a hate crime. “I forwarded them the email I’d gotten and screen-shotted some of the more explicit comments/Facebook messages,” he told the Jewish Journal.

The FBI now has evidence from hundreds of people that can be used against them in the future should they be accused of a hate crime.

Although the avalanche of hate that Hofstetter received must have been terrifying, he found a way to create something positive from the experience. Earlier this month, he posted a follow-up video on YouTube called “A Jewish Comedian’s Response to Nazi Death Threats” where he breaks down the arguments from anti-Semites just like he would destroy a heckler.

“As of last year, twenty-five of the thirty largest media companies in America had non-Jewish CEOs,” he said. “In other words, yes, there are lots of Jewish people in the entertainment industry. Just like there’s lots of people with the last name Johnson in the NFL. That doesn’t mean the NFL is run by people named Johnson.”

In the end, Hofstetter has found humor in the horror. “I’ve never been so proud, I pissed off the Nazis, are you kidding me?” he said in a recent set. “At first I was like ‘oh man the Nazis are coming for me’ and then I’m like ‘beats the alternative,’ for the Nazis being like, ‘He’s pretty funny.’ Like, I don’t want that.”