This woman’s viral Twitter thread about men NOT assaulting her is a must read. 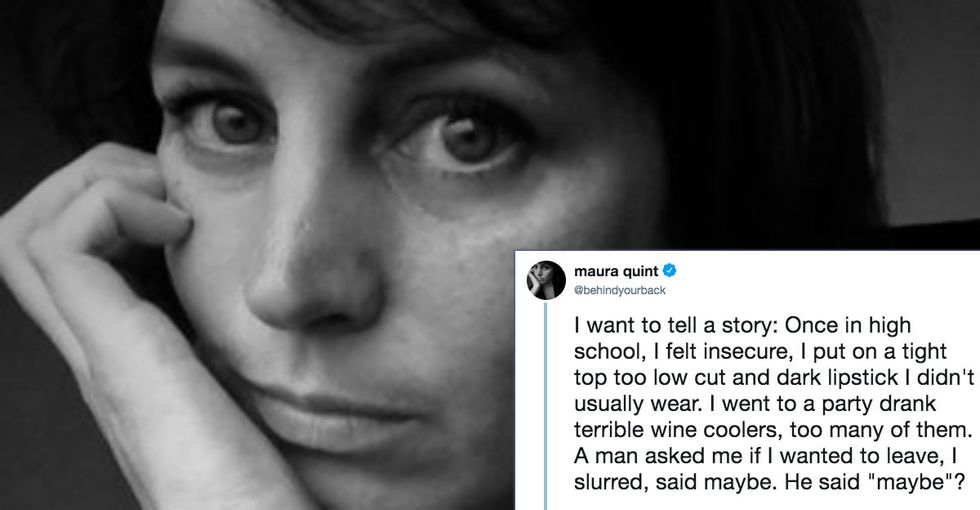 This article originally appeared on 10.02.18

For anyone who thinks stories of sexual harassment and assault are complicated, writer Maura Quint has a story for you. Actually, she has quite a few.

Quint posted a thread on her Twitter account that quickly went viral in which she talked about a number of real-life encounters with men that started out sexual, involved her expressing disinterest, and the men responding appropriately.

It wasn't an unrealistic hero's tale of men handing over the keys to their autonomy. Rather, Quint's incredible thread made it clear that the only variable in cases of assault vs. non-assault are when a man doesn't respect the autonomy of the woman he's propositioning.

Her thread opens up in an all-too-familiar tone, where we're led to believe it will go to an incredibly dark place:

I want to tell a story: Once in high school, I felt insecure, I put on a tight top too low cut and dark lipstick I didn't usually wear. I went to a party drank terrible wine coolers, too many of them. A man asked me if I wanted to leave, I slurred, said maybe. He said "maybe"?

Instead, Quint says her indifference to his proposition was met in kind with a guy just acting in a basic, non-rapey way:

And then he said "maybe isn't yes" and I went home that night, un-assaulted, because I hadn't talked to a rapist at that party.

She goes on to offer several other examples of being in sexual or potentially sexual situations with men who also managed to not sexually assault her:

And here's the real kicker, Quint says she has been assaulted. To her, the difference isn't hard to pinpoint:

I've been assaulted. I've also been not assaulted. The difference didn't seem to be what I was wearing, how flirty I was, how much I was drinking. The only difference seemed to be whether or not the men felt it was ok or not to assault.

Her thread has been re-tweeted nearly 50,000 times and “liked" more than 100,000 times. Other women and some men jumped in with their own tales of drinking, partying and still, somehow, managing to not assault or even harass the women they encountered.

It's a stark contrast to the half-baked defenses of Brett Kavanaugh and other men like him. There are incredibly rare exceptions where a man is accused of assault or harassment and he is entirely free of guilt. But for women, or anyone for that matter, who has survived sexual assault or experienced sexual harassment, there is no “gray area."

There's being OK with assault and then there's everything else. Whether or not we're consciously aware of this, we've all chosen a side. But if you're on the wrong side, it doesn't have to be that way forever.