People Are Awesome: This Ex-Con Is Now A Powerful Motivational Speaker

After a life of crime and six years in lockup, Vernon Robinson was ready to give back 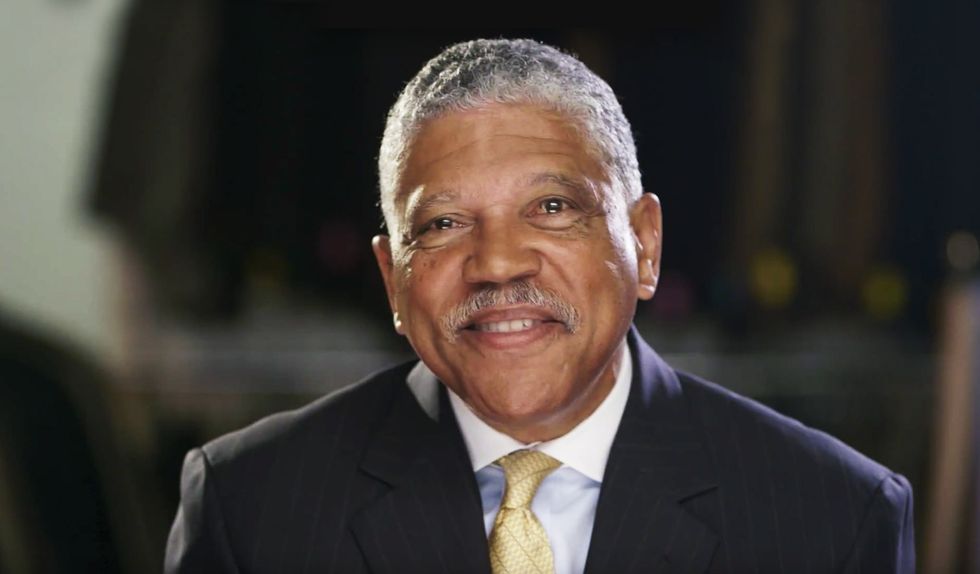 Photo courtesy of Wardrobe for Opportunity

Vernon Robinson makes it real easy to like him. With a boisterous enthusiasm for just about everything, a natural curiosity about his fellow humans, and a generally easy manner, Robinson gets you on his side almost immediately.

“I’m 65 years old but you meet me in person and I tell you what—you’re gonna think I’m 45!” he says, erupting into laughter. Soon enough, you’re laughing too.

This seemingly ceaseless charm makes it hard for some people to process Robinson’s background—he spent more than six years in prison, the culmination of a wide-ranging criminal career. He grew up—and still resides—in Richmond, California, a hardscrabble Bay Area suburb where Robinson says his options were slim.

“I was kicked out of school in the 8th grade,” he says, “and all I saw for myself was narcotics, hustling, all that stuff. No one wants to work a 9-to-5 where I’m from. Long before my body was incarcerated behind steel bars, I was a captive of the idea that I couldn’t do better.”

Robinson took his time behind bars to reflect and educate himself; by the time he got out, he was ready for an upgrade. He linked up with Wardrobe for Opportunity, a nonprofit that gives professional clothes to low-income individuals to assist them in finding and keeping good jobs. WFO recognized Robinson’s charms—they tapped him as a motivational speaker for their annual gala and spokesman for their annual July suit drive in conjunction with Men’s Wearhouse. Now he continues to volunteer for WFO, while also earning some speaker income on the side from paying clients.

We had a few questions for the man behind the motivation so we hopped on the phone—and left the conversation smiling.

Who is your hero?

I’ve been immensely lucky, had the opportunity to have several conversations with the late Mohammed Ali and other important figures. But at this juncture, my heroes are members of my family. My son Jalel came back from his deathbed—valley fever—and had to learn to walk all over again. Therapists told him to take baby steps, but on the first day he had his mind set on reaching the nurses station. I used to be his mentor, now he’s teaching me.

My daughter Tamika—I call her BB for beautiful butterfly—is also my hero. She leaves beauty in everything she touches. Tamika’s a teacher and she epitomizes generosity and compassion and love. Her spiritual insights, her comfort level in her own skin, it’s all so admirable. She teaches me.

It’s advice I gave to myself, behind bars. I knew that the path to self-empowerment would come from self-improvement. I got books delivered to me regularly, I studied, I followed that path. Even though it was advice given to me by myself, I think it turned out pretty well. (laughs)

How about the worst advice?

That advice came from me, too! (laughs) I allowed myself to be deceived that I could be a master criminal, then I left for the weekend and didn't come back for six years. I had told myself this was the flashy life I wanted, but I’ve since learned we need to listen to our deepest desires for betterment. Eventually it will manifest itself.

What’s the last thing to make you laugh out loud?

It happened just the other day. My 7-month-old niece, she just learned to stand up, she was watching me while I was cooking. I kept talking to her and she was watching my lips. She’s real smart, so after a little while she tried to mimic me talking. Thing is, only bubbles came out of her mouth, which was the funniest thing I have ever seen! She didn’t think so, though. She looked at me like “I’m talking, what you laughing at!”

If you could be anywhere in the world, where would that be?

I’d say Brazil. I’ve got a cousin down there and I’d love to check it out. Awhile back I had some Brazilian friends; one of them told me about coming to the U.S. She said they asked her if she was black or white and she just said, “I’m Brazilian!” They seem to really understand the concept of being a human being first. We’re all just people, in many different hues.