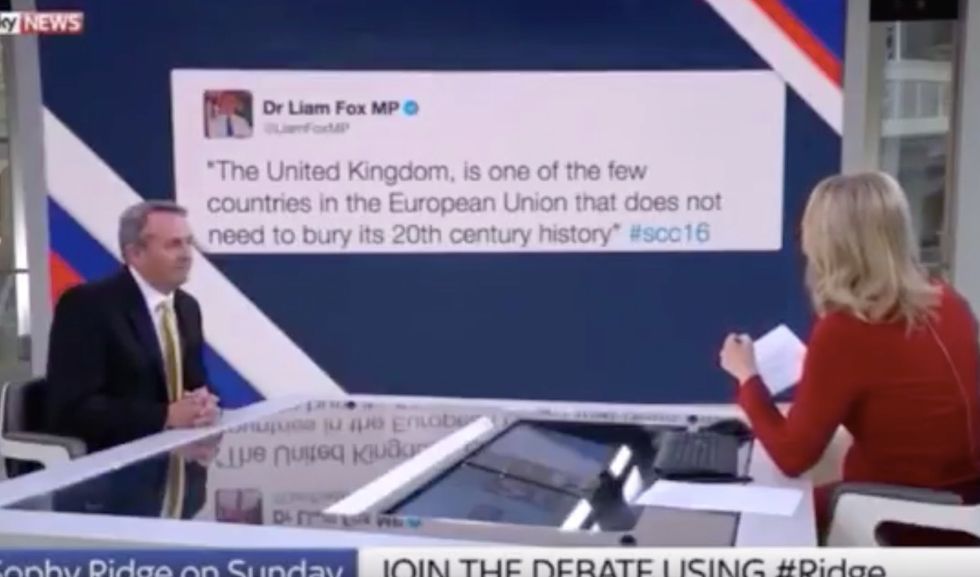 While it might seem like social media has blessed (plagued?) our entire lives, the fact is that it’s quite a new phenomenon. As such, people, especially older ones, tend to forget that there’s often a permanent undeletable trail of any picture, statement, or thought you’ve ever shared.

We’ve learned that doesn’t keep people from lying about what they’ve posted or done, despite a factual record otherwise, but rarely is the discrepancy between statement and truth quite so prominent as it was when Liam Fox, a British trade secretary denied sending a Tweet that his interviewer referenced.

This clip needs no further introduction.

It’s cute that he thinks his motherland was so well-behaved during the 1900s, even if that’s completely and objectively falsely, but his patently untrue explanation of the tweet’s attribution, as a giant version of it lingers above his head, is what takes this spectacle from “good” to “great.”

Here’s his deftly crafted lie as he explained it to Sky News’ Sophy Ridge on live TV:

"Just for clarification, I didn't send out a tweet.

“Number two, it was taken from a speech I gave a year and a half ago and it was tweeted out by I think The Guardian and it was an incomplete reference in any case.”

“What I said was Britain has…because…Britain has always felt less emotionally attached to the European Union because in our history we had never felt the need to bury the 20th Century in a pan-European project.”

That would have been an extremely convincing rebuttal if the tweet in question wasn’t, again, in the background larger in size than the man denying its existence.

Oh, and because Liam Fox is clearly unfamiliar with the permanency of Twitter, here it is, still up on his timeline: