We co-opted a negative vocabulary because it was convenient. Now, it’s time to recognize why words matter.

As someone who spent fifteen years in prison, I know that a simple but effective way to help reform the system is to refrain from using negative vocabulary, words and terms like ‘felon,’ ‘ex-con,’ or ‘inmate.’ 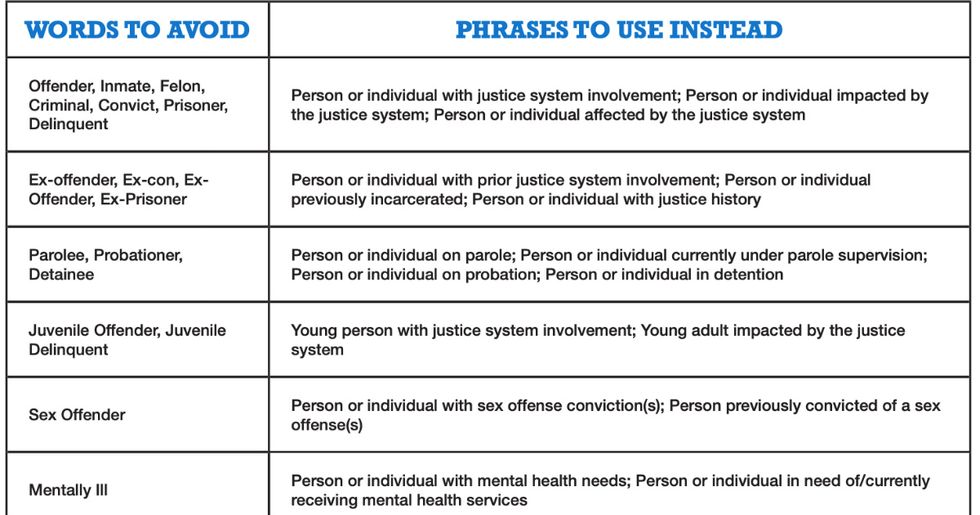 I recently received an email from a woman, we’ll call her Sarah*, working in the human services arena asking for “recommendations on places that are friendly towards re-entering female felons.”

The question seems harmless and is likely aimed at being helpful. In truth, a question phrased like this perpetuates the use of dehumanizing language, which we’ve been conditioned to use in reference to people with criminal records. Questions, phrases, and vocabulary like this impede our ability to treat justice-involved people with dignity.

As someone who spent fifteen years in prison, I know that a simple but effective way to help reform the system is to refrain from using negative vocabulary, words and terms like ‘felon,’ ‘ex-con,’ or ‘inmate.’ Indeed, if we want to be a country that truly believes in second chances, we need to remove this negative stigma.

At The Fortune Society, we frequently say “the crime is what you did, it’s not who you are” because it’s important for people who have been in the system to remind themselves that they have an opportunity to move forward. No one wants to be judged into perpetuity for their bad decisions and no one wants to be branded with a Scarlet letter. If you tell a child they’re bad, or constantly refer to their actions as bad, then that is a sentiment they will adapt to their identity. This isn’t a new phenomenon -- we recognize that our words have consequences.

In a study conducted by the Recovery Research Institute, researchers found that participants who were referenced to in negative terms were less likely to benefit from any treatment, and more likely to be blamed for their condition rather than offered help. While the study focused on those with addiction, the message is the same: negative words do not help, but rather hinder, those who are looking to overcome barriers.

Lucky for us, change is possible. When David Rothenberg started The Fortune Society 52 years ago, he was accustomed to using stigmatizing language like “former prisoner” and “inmate,” as this was the norm. David has now adapted his vernacular to use humanizing language and he will correct himself and others when he hears people being referred to in undignified ways. This change, while not always easy, is possible. It’s a matter of recognizing where something is wrong or detrimental and actively working to make positive change.

The importance of humanizing language is also starting to be embraced in places where it can make a huge difference. In 2016, the Pennsylvania Department of Corrections and the Washington State Department of Corrections both announced that they would be discarding terms like “felon” and “offender” to describe those with incarceration backgrounds. They are also encouraging staff to address the individuals by their name, rather than general terminology. It’s empowering to see corrections departments moving away from this vernacular because it acknowledges that this language is harmful. This is good progress, but the next step is to use this as a model for more places to urge people and the systems they manage to refrain from the use of negative terminology.

However, we can't pretend as if using people-first language will transform our entire criminal justice system - that's a pipe dream. We need to accept that this is only one piece, albeit an important one, of a larger effort to reform the system.

To help be a part of the solution, we created “Words Matter”, a helpful free guide that encourages people to be kind, cautious and deliberate with the words they use around the criminal justice community. The guide also encourages people to think about those involved in the justice system in humanizing ways and to have an open dialogue with them, not just about them. If you’re interested in bringing about change, whether it is around criminal justice reform or any other issue you care about, we all know that you have to be willing to speak up.

Now, let’s go back to that email I received from Sarah*. Even though I know that her intentions were good, I hope that she would be more thoughtful about her word choice. I certainly encouraged her to do so. It might seem like a small thing to some people, but there is a difference between a leper and a person with leprosy; an addict and a person with an addiction; an ex-con and a person with a conviction. Words matter - they always have and they always will.

Ronald F. Day, Ph.D., is Vice President of Programs at The Fortune Society in New York City. He is passionate about reentry, promoting desistance, dismantling mass incarceration, and addressing the stigma of incarceration.