A surveillance camera caught intense footage of a ten-year-old girl saving her infant sister from drowning.

She reacted without hesitation. 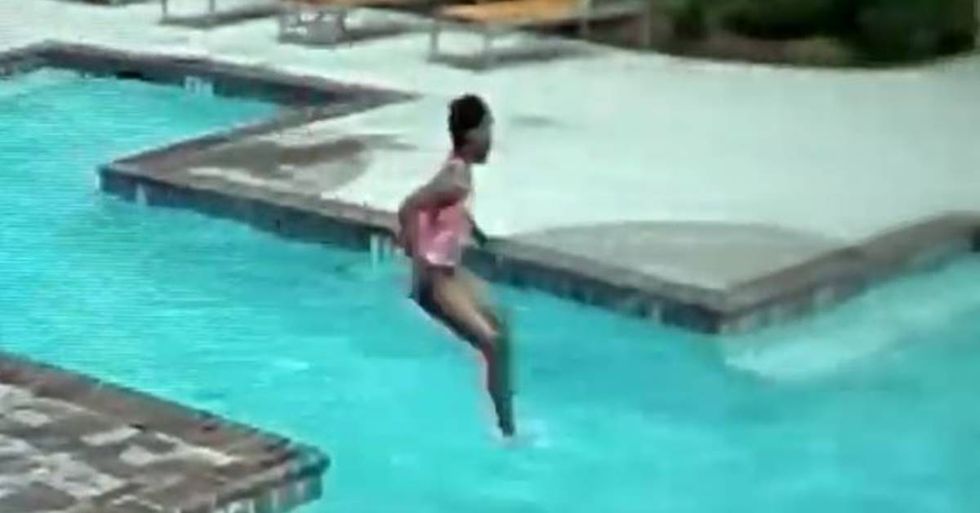 Ten-year-old Jayla Dallis is being hailed as a hero after she helped save the life of her three-year-old sister Kali Dallis.

On May 15, Kali and her sister were swimming at The Savoy apartments in Chamblee, Georgia when the infant jumped into the shallow end of the pool in a green inner tube. The inner tube went sideways and Kali was turned upside down with her head beneath the water.

During her struggle, Kali was dislodged from the tube and was unable to tread water.

Kali’s sister, Jayla, had just gotten out of the water when she turned around and saw her sister thrashing about. Jayla ran and jumped into the water and pulled her sister’s unconscious body out.

“She was, like, heavy, so I had to pull her by her hair, then I grabbed her by her waist and pulled her up,” Jayla Dallis told WSAV 3.

A bystander called the police and the apartment operations manager and the girls’ aunt began administering CPR.

Seargent Ed Lyons, the father of a six-year-old girl, got the call and sprang into action. When he arrived at the scene, Lyons immediately began administering CPR. “I saw my little girl lying there, same little bathing suit she wears, same kind of hair pulled up in a bun up top,” Lyons told WSAV 3. “You know, you’ve got to kind of push past that and do what you're trained to do.”

By the time the ambulance arrived, little Kali was spitting up water and had a pulse but was still unconscious and in critical condition.

Two weeks later, Kali was released from Children’s Healthcare of Atlanta at Scottish Rite after making a full recovery.

“I’m fortunate to be able to take my baby home after two weeks of being here,” her mother, Daneshia Dallis told WSAV 3.