The All-Female Sushi Restaurant That Eats Sexism for Lunch

They’re defying conventional wisdom on who can be a chef. 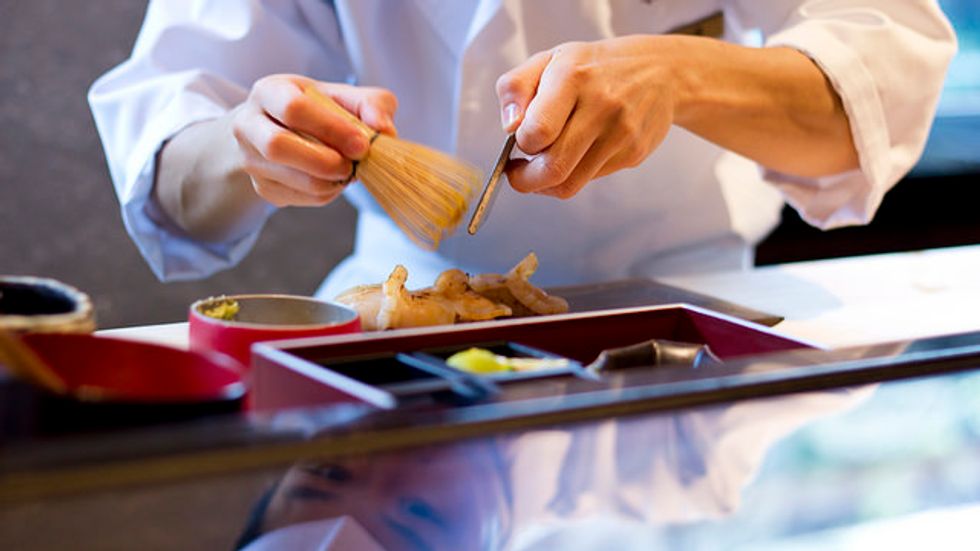 A female chef at the Kyoto Ritz-Carlton. Image via Flickr user Japanexperterna.se

Sushi preparation, as the private chef Kaz Matsune has written, “is made up of hundreds of small and (what may seem) tedious daily routines.… What makes the difference at the end of the day is one's willpower to hold on to his discipline to do all those small steps.”

The talented chefs at Tokyo’s Nadeshiko Sushi might take issue with one word in Matsune’s description: “his.” The Akihabara district restaurant is the only one in Japan staffed solely by female chefs, which means that the women in its kitchen are defying Japanese conventional wisdom on who gets to prepare the scrumptious traditional food.

The Guardian reports that women in the industry are bedeviled by awful myths and stereotypes. Kazuyoshi Ono, the son of Michelin three-star chef and documentary star Jiro Ono, has claimed that women cannot be sushi chefs because they menstruate, which creates “an imbalance in their taste.” Others have said that wearing cosmetics affects the senses, or (even more bizarrely) that women’s resting body temperature throws off fresh ingredients.

“It’s all about having the confidence,” 29-year-old Nadeshiko Sushi head chef Yuki Chizui told The Guardian when asked about her job. “The hours are long and the work can be physically tough, so that’s why some people believe women are not up to it. If they want it badly enough, they can overcome the sexism.”

“My heart stopped when I saw an Instagram photo of [a] female sushi chef, who opened her first sushi restaurant in Ginza, shaved her hair and [wore] no makeup,” Isassi said in an interview with NPR last year. “It just reminded me how hard it is to work as a woman in [a] male-dominant profession.”

Chizui has 10 years’ experience in the sushi industry, and said she’s unbothered by the lookie-loos who show up at her restaurant for the novelty of watching women make sushi.

“They show up from time to time, but I just regard them as fools,” Chizui said. “That’s the best way to answer our critics … to keep proving to our customers that we can make good sushi.”