This Dad Constructs the Most Amazing Wheelchair Halloween Costumes

This year, he’s tackling a dinosaur. 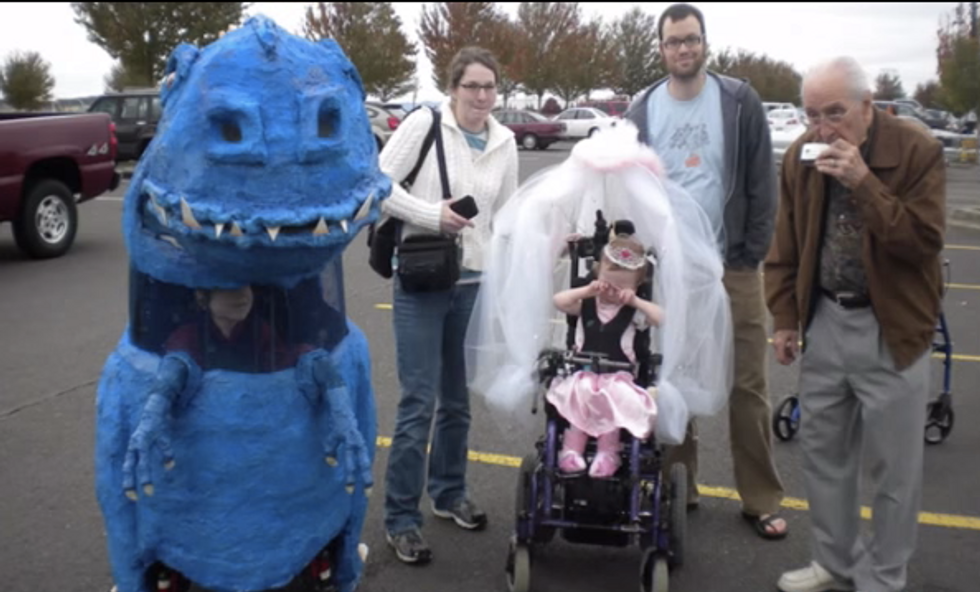 Building outlandish Halloween costumes for his children started as a pet project for Ryan Weimer. When his son Keaton was 3, the toddler received his first wheelchair. It would help the boy get around despite his spinal muscular atrophy (SMA) diagnosis, which impedes Keaton’s muscle control. Then, come Halloween, Weimer asked his son the time-honored question “What do you want to be?”

“A couple days later I had one of those moments when my brain decides it's the best time for thinking,” Weimer writes on his blog. “I realized, ‘Keaton has this wheelchair he cruises around in, and every pirate needs a ship, so let's just build one around his chair!’”

The father didn’t know how he would do it, but he built it anyway.

Seven years later, the project has only gotten more complex. Last year, Weimer raised money on Kickstarter to create How to Train Your Dragon costumes for Keaton and his little brother Bryce. Weimer worked with brother-in-law Daniel Saunders to build the gigantic wheelchair contraptions.

Keaton as Toothless, from How to Train Your Dragon, via Magic Wheelchair

Today, Weimer and his wife, Lama, also head the nonprofit Magic Wheelchair, which works with volunteers to fund and create costumes for other children in wheelchairs.

“I’m not smart enough to come up with a cure, but this is something I can do that has impacted my family in a positive way,” Weimer told an Oregon NBC affiliate.

What’s in store for this year’s spooky, scary Halloween? Weimer and Saunders are hard at work on an Indominus Rex costume for Keaton, and a Guardians of the Galaxy spacecraft for Bryce.