Explore the Surprising Faces of Debt In America

The Debt Project, a new series by photographer Brittany M. Powell, illuminates the real people behind the numbers. 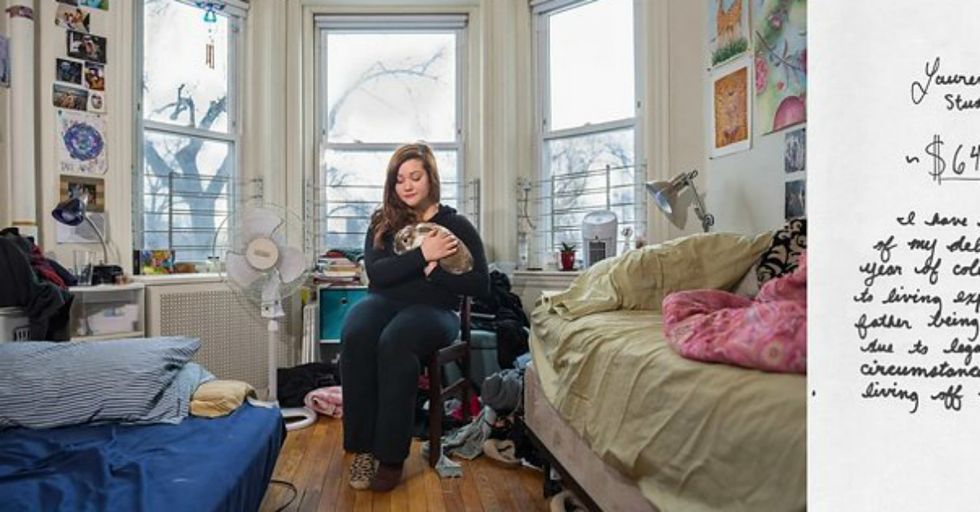 Hundreds of millions of Americans currently shoulder staggering debt that threatens to spiral them into financial insecurity. According to a recent study by the Federal Reserve, 1 in 50 households carry more than $20,000 in credit card debt, with the U.S. population as a whole owing more than 2.4 trillion. Of that inconceivable amount, $60 billion is from credit cards, at an average of $7,327 per household. This is not a faceless statistic. Many workers, still recovering from the seismic shock of the Great Recession, give over a sizable portion of their paycheck each month to cover these debts. In a shocking study commissioned by ProPublica and ADP, it was reported, “more than one in 10 employees in the prime working ages of 35 to 44 had their wages garnished in 2013.” Debt, the elephant in the room, is an insidious and often invisible force. Whether it’s from student loans, medical bills, credit cards, or real estate, the burden can feel so substantial that it almost seems like a physical presence in our lives. The Debt Project, a photo series by San Francisco-based photographer Brittany M. Powell, hopes to illuminate what debt really looks like by peering into the surroundings of those living beneath its weight. The result is a group of intimate photos, still under development, that show the real and often banal face of financial hardship.

Powell has known debt personally: after 15 years as a commercial photographer for outlets like National Geographic she found herself underemployed and was forced to live off credit cards, before ultimately filing for bankruptcy in 2012. In an interview with The Washington Post, Powell says the experience taught her how debt can often be a “shameful and private” experience, albeit a common one. “Many of us are in the same situation, but it’s not something that we collaboratively talk about,” Powell said. As reporter Ana Swanson noted, “living with tens of thousands of dollars of debt is now a common American experience. Families have more than twice as much debt than they did in the 1950s.”

In the series, Powell inspires others to openly discuss their debts. She is hoping to photograph 99 Americans—in homage to Occupy Wall Street’s “99 percent”—and interview her subjects on the role of fiscal struggle within their lives. So far she has captured over 50 of the 99 intended participants in locations ranging from San Francisco to New Orleans and Detroit, to rural Vermont. Powell spends approximately an hour with each subject, photographing them in their own homes. To add to the personal nature of this project, she asks them to hand-write a note explaining their debt and how they acquired it. Powell recently explained to Slate that the series was partially inspired by traditional Flemish portrait paintings of wealthy citizens surrounded by their worldly possessions—“a testament to their wealth, and a representation of their value.”

Reminiscent of Dorthea Lange’s WPA Great Depression photography, Powell is able to humanize a devastating financial and social epidemic and bring it uncomfortably close to home.