“I found it an extremely interesting conversation” 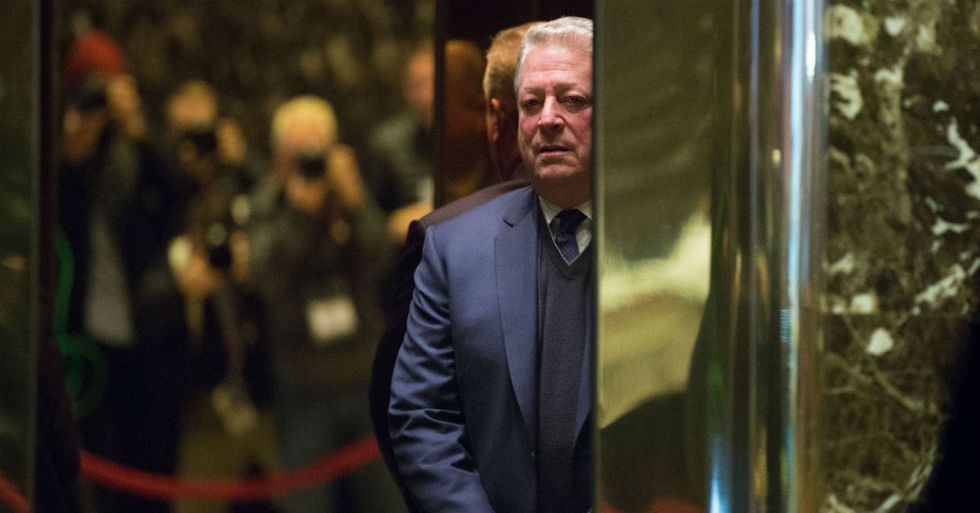 If you made a list of all the people who might visit President-elect Donald Trump at his signature Trump Tower residence in the weeks leading up to him officially taking office, Al Gore would probably be somewhere near the very bottom and only then as a joke.

But the former vice president turned environmental activist did just that on Monday and even had kind words for the avowed climate change skeptic after leaving the meeting.

“I had a lengthy and very productive session with the president-elect,” Gore told reporters after the meeting. “It was a sincere search for areas of common ground.”

What’s even more fascinating is that when word leaked of Gore’s visit to Manhattan it was to be a chat with Ivanka Trump, who has reportedly been pushing to become her dad’s “climate czar.” Though even with Ivanka’s enormous influence over her father, it’s unlikely that a visit with the first daughter would have amounted to much. Instead, it turns out Gore got a meeting with Trump himself.

“I had a meeting beforehand with Ivanka Trump. The bulk of the time was with the president-elect, Donald Trump,” Gore said. “I found it an extremely interesting conversation, and to be continued.”

It sounds highly unlikely, to say the least. But when you consider that Trump has based some of his past skepticism of the issue on a Chinese “hoax,” it’s always possible that he could use that tension to come around a bit on the environment. And besides, research continues to show that companies focused on reducing the effects of man-made climate change are actually very good for business, something the jobs-conscious Trump could be open to considering as part of his overall economic plan.

That approach certainly stands a better chance of swaying him than the other bit of news that was reported by The New York Times today. A group of 700 scientists are sending a blistering letter to Trump, urging him to take action on climate change and which reads in part, “We urge you to decide if you want your presidency to be defined by denial and disaster, or acceptance and action.”

While there’s no ground to argue with their larger point, the tactic of piling on with condescending language and finger pointing isn’t likely to create common ground with the president. But if Al Gore can somehow build that bridge, he may create a far greater legacy than anyone could have imagined before today’s potentially historic Trump Tower meeting.