Alabama just tried banning abortion for victims of rape and incest without even holding a vote.

“We are living in the Handmaid’s Tale.” 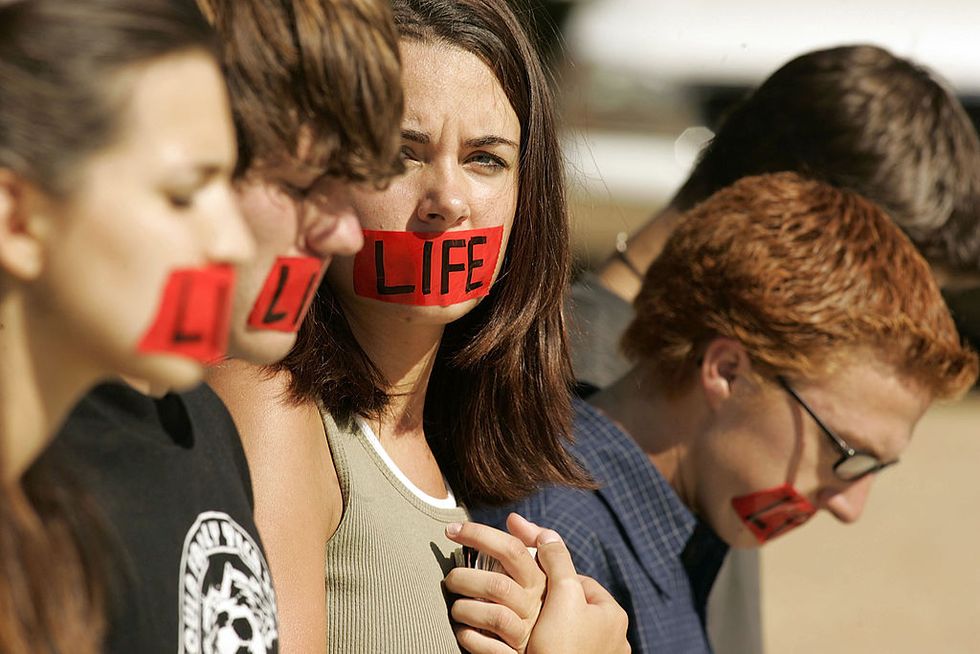 A literal assault on democracy in happening in Alabama.

We love the American South. Its people, culture and natural beauty are some of our nation’s most cherished resources. But there is something dark and disturbing happening right now in some of our Southern States.

First, Georgia passed its “heartbeat bill” that places unnatural restrictions on abortion that seemingly fly in the face of our federal pro-choice protections. Then, a Holocaust remembrance rally in Arkansas was interrupted by actual Nazi flag waving anti-semites.

The latest example comes from Alabama, where the state was debating its own draconian restrictions on abortion. Now, states do possess the right to enact restrictions on abortion so long as they do not technically rise to the level of breaking federal law regarding a woman’s right to choose. There’s a fair amount of nuance there for people who respect the law but want to honor local preferences regarding the specific details surrounding a woman’s access to health care.

Instead, in Alabama Lt. Gov. Will Ainsworth attempted to circumvent the democratic process entirely by callously dropping in an exception to the state’s current abortion legislation that would ban access to abortion for women who are survivors of rape and incest. Ainsworth provides over the state Senate and said his maneuver was well within his rights as head of the Senate but it caused an obvious uproar amongst his political opponents who saw this as not just a political disagreement but a direct assault on the very nature of our democratic system of checks and balances.

The attempted legislative coup caused a literal uproar in the Senate:

“He’s just supposed to sit and observe the Senate and go by the rules and that’s all I expect from his is fairness,” Senate Minority Leader Bobby Singleton (D) said. "And if he’s going to be like that then we can start to shutting this whole darn Senate down. And we will definitely do that.”

Senate President Pro Tem Del Marsh, also a Republican, finally stepped in an moved a vote on the proposal until next week so that lawmakers can actually weigh in on, and be held accountable, for the proposal.

“We can come back in here on Tuesday and have extended debate and make that final decision," Marsh said.

Nonetheless, it’s vital to plainly state what is at stake here: lawmakers in Alabama, mostly men, want to dictate that women who have been raped or victims of incest, should further have their independence and decency stripped from them by denying them the right to terminate a pregnancy involuntarily thrust upon them by sexual criminals. In a very real sense, it is making rape and incest legal in a state home to 4.8 million citizens, 51.5 percent of whom are women.

Just reading front page of NYT. Somehow missed that Alabama is gearing up to sentence doctors to die in prison for… https://t.co/QleMZTTLd1
— Scott Hechinger (@Scott Hechinger) 1557412040.0

What's happening in Georgia, Alabama, and state legislatures across the country is nothing less than a coordinated… https://t.co/6vk2ViahvP
— Kirsten Gillibrand (@Kirsten Gillibrand) 1557417508.0

Supporters of the bill have made it clear that they see it as a potential challenge to the Supreme Court’s Roe v. Wade decision - something the religious right has wanted for decades - and that now possesses a potential sympathetic ear in the 5-4 conservative court majority.

“You’ve got the super majority. You can pass any bill that you want. You’ve got 27 men over on the other side ready to tell women what they can do with their bodies,” Singleton added. “You can do that if you want to. You don’t have to procedurally just try to run over us.”

The real question is, will leaders in Alabama, and the Supreme Court, vote to approve running over the rights of women across the entire nation?