Anti-Drone Ads Ask Pilots Not to Fly the Unmanned Aircraft

The commercials will air in markets near Air Force bases around the U.S. 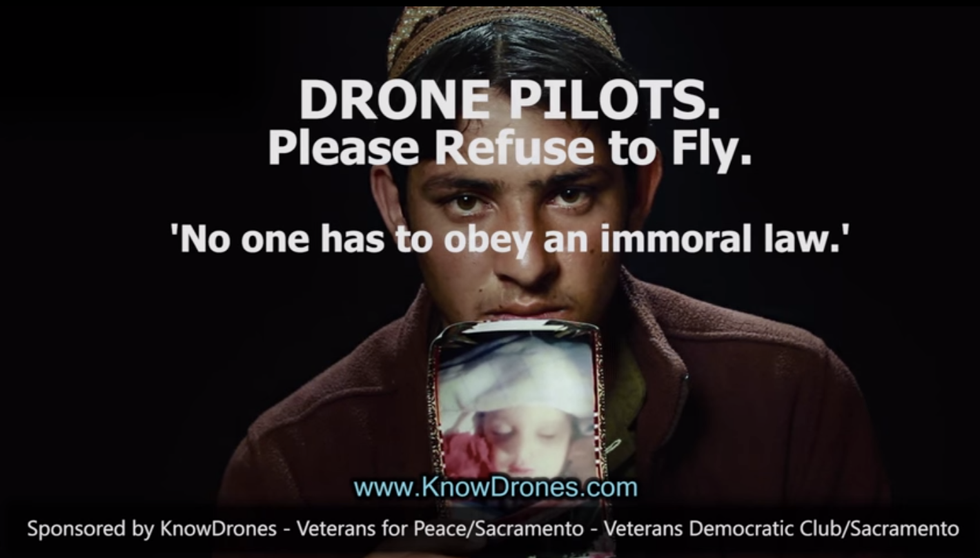 What may be the first anti-drone advocacy commercials to run in the U.S. are set to air in April on television sets all over the country. The ads feature footage from the republic of Waziristan while a voiceover commands, “Drone pilots, please refuse to fly.” On-screen text also quotes the late Óscar Arnulfo Romero y Galdámez, a bishop of the Catholic Church in El Salvador, who said, “No one has to obey an immoral law.”

The U.S. armed forces veterans who are spearheading the campaign say the ads will be targeted to areas near Air Force bases. The activists comprise a Sacramento-based organization called KnowDrones.com, which, according to their site, “provides drone replicas and educational materials to support citizen action to achieve an international ban on weaponized drones and surveillance drones—war drones.” Local Sacramento veterans’ groups are also sponsoring the ads.

“We felt that the president and the Congress had been totally unwilling not only to stop the killing, but to provide any information to the public on the scope of these attacks since they began,” Nick Mottern, a KnowDrones.com organizer, told the Guardian.

The 15-second commercials are available in two versions—one, which contains graphic footage of injured children and dead bodies, will only air after 10 P.M. Another edited cut of the ad will air earlier in the day.