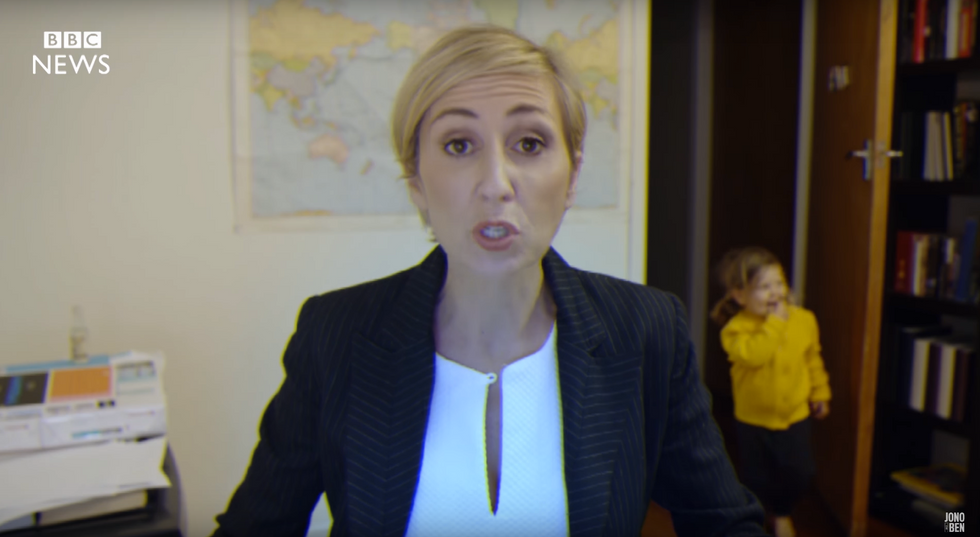 Last week, South Korea expert Robert Kelly might have had a pretty standard BBC interview had his children not interrupted, creating an immediate viral sensation. In a nutshell, Kelly tries to power through a serious discussion about South Korean politics while his young daughter wanders in with a cheese stick, followed by her infant sibling. Before long, Kelly’s wife rushes into the room and whisks the kids away. Most saw the video as hilarious, while in other spheres of the internet, things got a little .. weird.

Whether you saw the spectacle as hysterically funny or mildly disturbing (or some combination of both), many of us were still left wondering, what would the situation look like had a working mother been interrupted? New Zealand based YouTube show Jono and Ben asked just that. In an undeniably funny spoof of the original viral video, a woman conducts a straight-faced BBC interview all while feeding a toddler, roasting a chicken, cleaning a toilet, steam cleaning a shirt, and defusing a bomb. But the pièce de résistance is when her husband comes in looking for a lost sock. Classic.

It’s extreme in all the best ways and makes a clear point about societal expectations. When a man takes time away from his job to take care of his kids, it’s called babysitting. When a woman does it, she’s simply being a mom. With over a million views gained in the last 24 hours, the spoof has clearly struck a chord. As one woman wrote in the comments section, “As a politician with 3 young kids, this really is my life. Except I was breastfeeding my baby during meetings. And I never iron/steam anything.”

Watch the video above to see for yourself.