The show’s writers got political last night when they featured a plot twist about deportation. 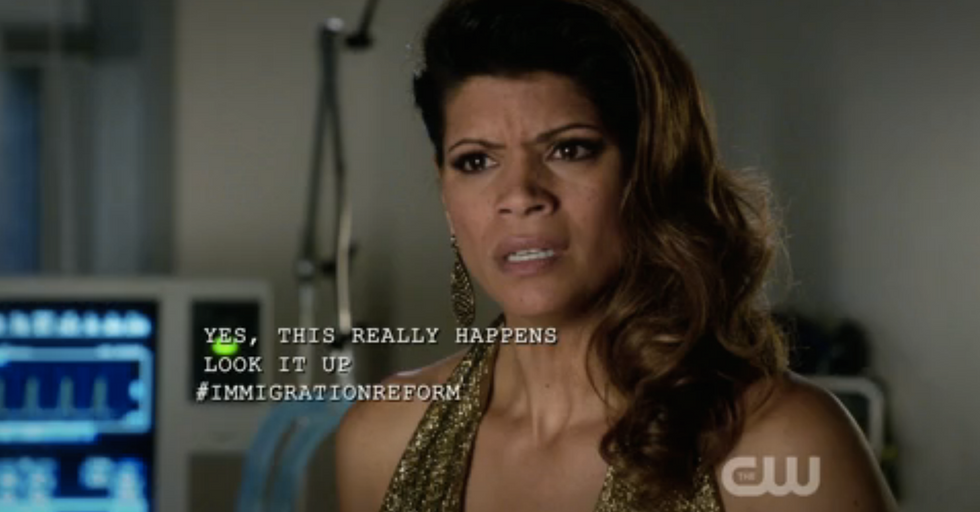 Jane the Virgin’s Gina Rodriguez captured our hearts, minds and Nielson ratings with her moving Golden Globes acceptance about representation in the media but the actress, and the show’s writers, are wading into more political territory. The soapy telenovela-lite ABC show is big on dramatic plot twists and the characters frequently find themselves in hard-to-believe scenarios (and we expect nothing less from a show about a pregnant virgin). The show hit pretty close to home during last night’s episode with a storyline that was too damn real: a near-deportation of Jane’s grandmother, who was in a coma as the story unfolded. And Jane the Virgin writers were not subtle not about their politics. The show, which uses on-screen text as a narrative device, flashed the hashtag #ImmigrationReform as the doctor informed Xo, Jane’s mother, that the hospital would report abuela to the immigration authorities.

“Your mother is in this country illegally,” the doctor tells her. “She has no insurance and the hospital cannot afford to absorb the cost of her care. When the hurricane lifts, we will have to notify ICE and they will deport her to Venezuela, where she can continue to recieve care if she needs it.”

“YES, THIS REALLY HAPPENS,” flashed the captioned narration. “LOOK IT UP #IMMIGRATIONREFORM”

Apparently, this kind of thing really does happen often. It’s called medical repatriation and it bascially gives hospitals license to board patients on flights to their country of origin, effectively deporting them, to recieve additional medical care—and the patients might even be unconscious while it happens. While the hospital’s plans (SPOILER ALERT!) were thwarted by a last-minute save by Jane’s lovelorn ex-boyfriend, Michael, the show’s writers didn’t stop before they made a pretty powerful point about immigration reform—and just in time for Obama’s State of the Union address.