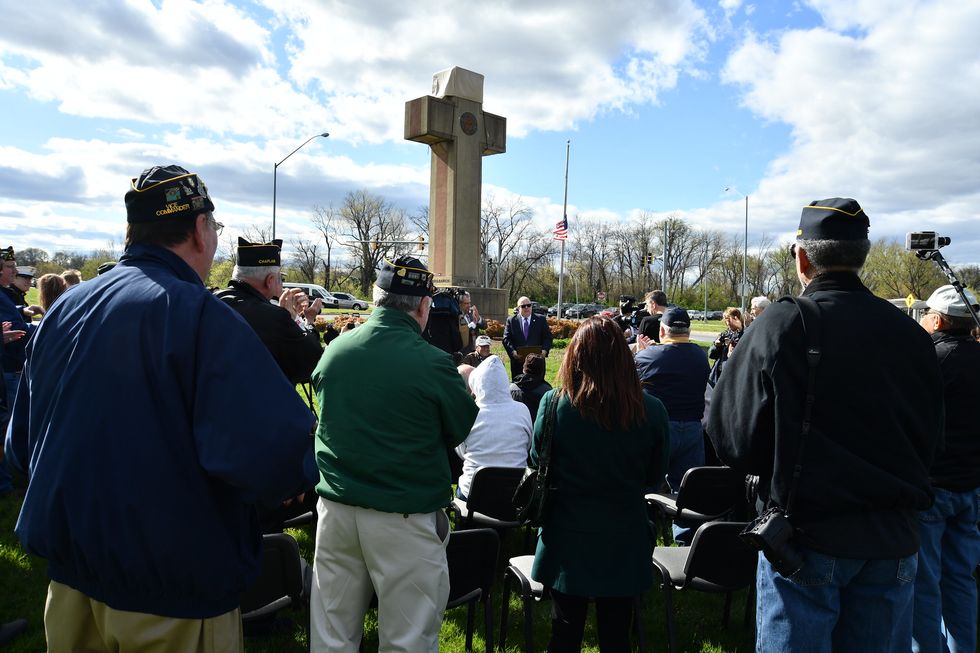 The Supreme Court ruled on June 20 that a war memorial in Maryland in the shape of a Christian cross can stay on public land. The Bladensburg Peace Cross is a 40-foot cross erected as a memorial for those who died in service during World War I.

In a complex 7-2 ruling, the Supreme Court held that “the Bladensburg Cross does not violate the Establishment Clause” of the Constitution.

Writing for the majority, Justice Samuel Alito concluded, “The cross is undoubtedly a Christian symbol, but that fact should not blind us to everything else that the Bladensburg Cross has come to represent.”

Justices Ruth Bader Ginsburg and Sonia Sotomayor dissented. Justice Ginsburg argued, “The principal symbol of Christianity around the world should not loom over public thoroughfares, suggesting official recognition of that religion’s paramountcy.”

Experts believed the case could have far-reaching ramifications.

Constitutional law scholar Garrett Epps, for example, has noted that the case could “help resolve disputes over local memorials around the country.”

The case underscores the ongoing conflict over the place of religion in American public life. As a scholar who studies this debate, I believe it is important to understand the history of such conflicts and how symbols can have more than one meaning in a diverse society.

History of the memorial

To highlight these different meanings, let’s consider the history of the Bladensburg Peace Cross.

The memorial sits on public land, at the center of a busy intersection in Prince George’s County, in Maryland.

In 1919, a local group of citizens, including 10 mothers who lost their sons in World War I, formed the Prince George’s County Memorial Committee. Together with the Good Roads League of Prince George’s County, they launched an effort to memorialize those who died in service during the war. In 1922, American Legion Post 3 volunteered to join the effort to build the memorial.

The memorial effort set out to dedicate the highway between Bladensburg to Annapolis as the “National Defense Highway.” It also decided to include a memorial cross at the beginning of the highway. The intent behind the design was to invoke “patriotism and loyalty to the nation” as well as, in the words of the treasurer of the committee, to serve as a “grave stone” for her son.

Donors who supported this the initiative signed a pledge which stated,

“We, the citizens of Maryland, trusting in God, the Supreme ruler of the universe, pledge faith in our brothers who gave their all in the world war to make the world safe for democracy. Their mortal bodies have turned to dust, but their spirit lives to guide us through life in the way of godliness, justice and liberty. With our motto, ‘One God, One Country and one Flag,’ we contribute to this memorial cross commemorating the memory of those who have not died in vain.”

The memorial was dedicated on July 12, 1925. A plaque on the memorial is inscribed with the names of 49 soldiers who died in the war.

In 2014, three citizens filed a suit claiming that the display of a massive Christian cross on public property was a violation of the Establishment Clause of the First Amendment of the United States Constitution.

In 2017, the case went to the U.S. Court of Appeals for the Fourth Circuit in Virginia. In a ruling, the judges said that the cross “has the primary effect of endorsing religion and excessively entangles government in religion.”

This wasn’t the first war memorial in the shape of a cross that was legally challenged. The Mount Soledad cross in La Jolla, California, was subject to litigation for more than a quarter-century.

The Mount Soledad cross is a 43-foot cross which was once on publicly owned land. In 1989, a Vietnam War veteran filed suit against the city of San Diego over the presence of a religious symbol on public property. In 1991, a U.S. District Court ruled the cross was “unconstitutional and had to be moved off public land.”

The 1991 ruling led to a series of appeals in the federal court system that spanned decades. To end the protracted and ongoing legal drama, the Mount Soledad Memorial Association agreed to purchase the public landbeneath the cross.

As a result, in 2016, the Ninth U.S. Circuit Court of Appeals issued a one-page ruling that ended all litigation since “the central issue – a religious symbol standing on government property – was moot.” In other words, since the cross was now on private property, the issue was resolved.

In response to the litigation involving the Mount Soledad cross, the U.S. House of Representatives passed the War Memorial Protection Act in 2012. Sponsored by California Rep. Duncan Hunter, the legislation permits the inclusion of religious symbols on official military memorials.

Upon passage by the House, Hunter stated, “Across the country and beyond our shores, America’s military and veterans are proudly represented by war memorials that also display symbols of personal faith and religion.”

Though not law, the passage of the bill by the House demonstrates the extent of the conflict around the presence of religious symbols in American war memorials.

Both people of faith and those who are nonreligious can feel uncomfortable with memorial crosses. For example, Daniel Headrick, an associate pastor, lawyer and 2018 fellow of the Baptist Joint Committee for Religious Liberty, writes, “To reduce the cross to a symbol memorializing war sacrifice is a quintessentially American act, but such a meaning is profoundly at odds with the theological significance of the cross.”

In other words, Headrick doesn’t believe a cross can be stripped of its religious meaning.

In a religiously plural democracy, war memorials with religious symbols can have different meanings for different citizens and that can lead to conflict. Perhaps for this reason, the 19th-century French observer of American democracy Alexis de Tocqueville warned of the political effects when religion gets “mixed up with the bitter passions of the world.”

Corey D. B. Walker is a Visiting Professor, University of Richmond.