The tuxedo Trump wore to meet the Queen was a royal fail. God save this meme! 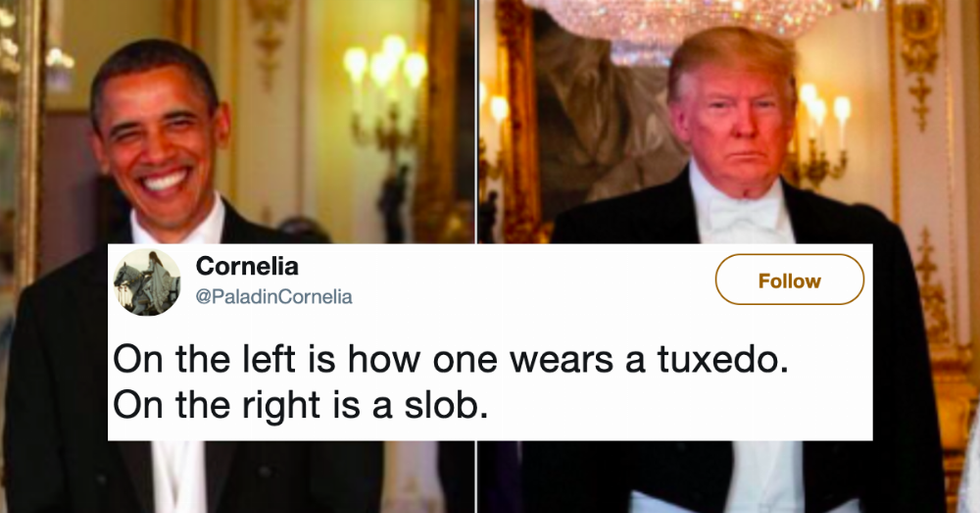 England really let Trump know that he wasn't welcome there on his most recent trip to the United Kingdom. There's nothing like some good old fashioned, petty-as-hell jokes at the expense of a world leader who much of the world hates.

While the Trump baby balloon did make a comeback and penises with Trump's name written on them were mowed into lawns in the spirit of escalated middle school humor, people seemed to be the most focused on mocking the tuxedo that Trump wore when he met with the Queen.

Trump, did you forget to pack and have to borrow a butler Halloween costume? Did you decide to wear a suit that fit ten years ago and doesn't account for all the fast food you eat now? There are so many problems with this tuxedo it's truly impossible to list them all. He's the supposedly super savvy millionaire businessman president and he doesn't know how to get a tuxedo fitted? Money can't buy class.

While it's not totally fair to ridicule someone for an outfit choice, the way you present yourself says a lot more about how seriously you take your position and if your stomach is busting out of your jacket, maybe you need to reevaluate. As we all learned in "The Devil Wears Prada," fashion is art you live your life in and we hate to break it to you, Trump, this tuxedo is not art.

Is the white vest part of the tuxedo supposed to look like absolute dog shit or is that a Trump specialty?
— Selena Coppock (@Selena Coppock) 1559593587.0

The fact that Trump doesn't own a tailored tuxedo is the ultimate proof that he's nowhere near as rich as he claims. https://t.co/v7OftqTMDV
— pajama_patty (@pajama_patty) 1559600496.0