80% Of America's Teachers Are White 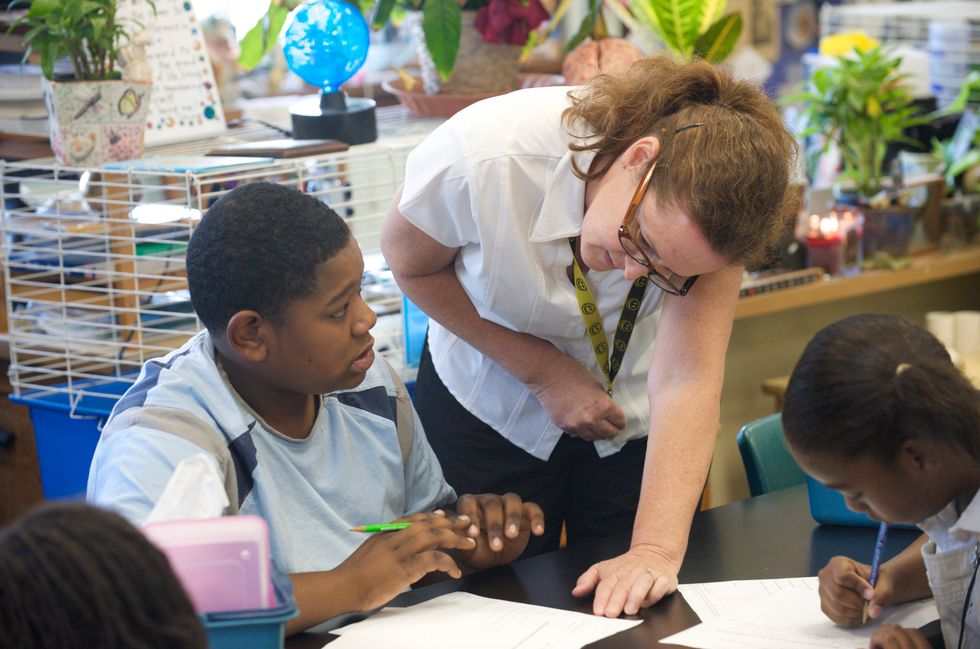 My 16-year-old son had what will likely be his only black male teacher throughout his K-12 experience when he was in fifth grade. He started his junior year of high school on Thursday and called me after the half-day of classes was over. “The teachers seem cool,” he said. But once again, none of them look like my African-American son — and most students across the nation won’t have a black teacher either. Or a Latino, Native American, or Asian American one.

That’s because a report released this week by the U.S. Department of Education’s National Center for Education Statistics shows that a majority of America’s nearly 4 million public school educators are still primarily white. The data included in the report comes from the 2015-16 National Teacher and Principal Survey, which collects information from a nationally representative sample of elementary and secondary public school teachers and administrators in all 50 states and Washington, D.C.

Meanwhile, America’s public school population has been majority children of color since 2014 — and it’s only getting more diverse. Data compiled by the Education Department in the fall of 2016 found that of the nation’s 50.4 million public school kids, 24.6 million (49%) were white children and 25.9 million (51%) were kids of color.

Moreover, the department noted that this trend toward more diversity in our schools is only going to continue. “The percentage of students enrolled in public schools who are White is projected to continue to decline through at least fall 2025, as the enrollments of Hispanic students and Asian/Pacific Islander students increase,” wrote the department.

It’s tempting to think that when it comes to teaching algebra or how to write a topic sentence, a teacher’s skill — not their color — should be what counts. Except plenty of research shows that educators often bring their racial prejudice into the classroom.

A 2014 analysis of a decade of federal data by the Center For American Progress found that public school teachers have lower academic expectations for black and Latino children, even before these kids enter the classroom. The center found that teachers (who are, don’t forget, majority white) “believed that African American students were 47 percent less likely to graduate from college than their white peers” and “that Hispanic students were 42 percent less likely to earn a college diploma than their white peers.”

And while school is about academics, it’s also a place where kids are socialized. My 13-year-old son started his freshman year of high school on Tuesday, only two days after the racially motivated violence in Virginia. I texted him on Tuesday afternoon, “Did any of your teachers bring up what happened in Charlottesville or address not tolerating racist speech in class?”

His text back to me spoke volumes: “No.” His answer was no on Wednesday afternoon, as well.

Contrast that with the approach of David Jackson, a black male secondary teacher in the New York City area. In an op-ed published in the New York Times in April, Jackson wrote about showing his students a film about Kalief Browder, “who was arrested at age 16 for allegedly stealing a backpack, spent three years on Rikers Island without being convicted of a crime and died by suicide after his release.” Jackson had his students — nearly all children of color — write essays about their own experiences with law enforcement. Jackson knows they’ve been stopped and frisked and knows it’s critical to talk about it.

“I realized it’s not just that my students live these topics every day. It’s also that they are teenagers who have seen me interact with law enforcement during our trips off campus. They trusted me because they knew I lived them as well,” he wrote.

[quote position="full" is_quote="true"]It is important for white students to encounter black people who are knowledgeable.[/quote]

But the kids of color aren’t the only ones who benefit from more diverse teachers. In 2015, Gloria Ladson-Billings, a well-respected education professor at the University of Wisconsin-Madison, broke it down:

Or Latino, Asian American, or Native American competence for that matter? When 75% of white people in America don’t have any non-white friends, diverse teachers can provide white students with some much-needed perspective. If that happened, perhaps kids wouldn’t grow up to become racists carrying torches at the University of Virginia.

There are no quick, easy fixes to this issue of teacher diversity. Research released last year from the Brookings Institution’s Brown Center on Education Policy found that low pay and a lack of professional support is driving people of color who are already educators from the classroom and makes it much harder to attract them to teaching in the first place. But given what’s happening in America, it sure seems like our future peace and prosperity depends on taking diversity seriously.