Meet the Healthcare Innovators Making It Easier to Thrive

A cancer-detecting phone plug-in, a self-injectable contraceptive, and more. 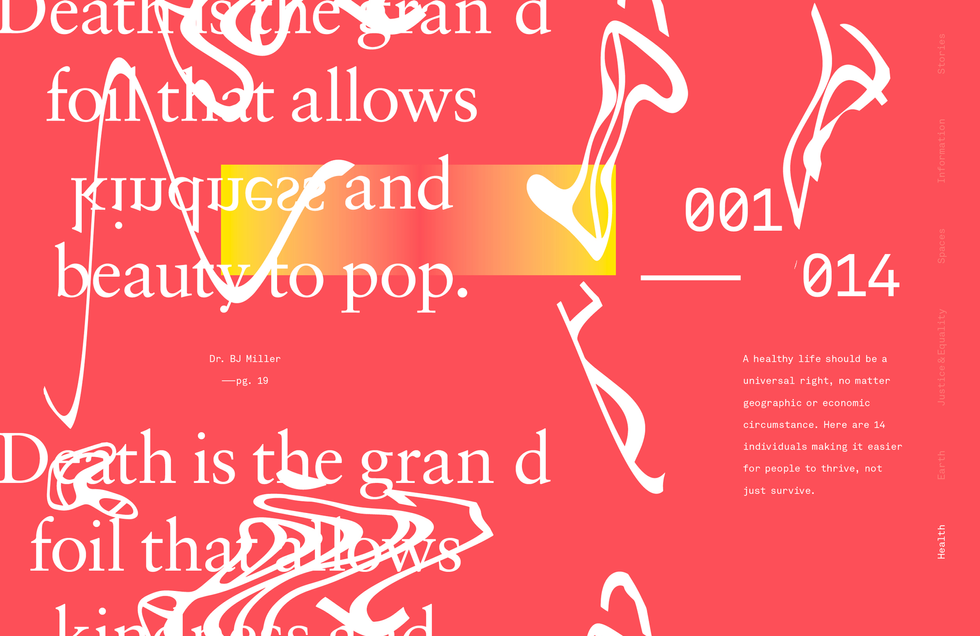 Each year, GOOD celebrates 100 people from around the globe who are improving our world in creative and innovative ways—advocates, inventors, educators, creatives, business leaders and more who are speaking up, building things, campaigning for change, and ultimately refusing to accept the status quo.

In this section, meet 12 individuals modernizing medicine and revolutionizing healthcare.

Hossam Haick’s App Can Smell What Ails You

Hossam Haick can’t diagnose cancer just by looking at you, but he’s close. The 40-year-old chemical engineer and nanotechnologist at the Technion-Israel Institute of Technology holds dozens of patents for noninvasive diagnostic technology: nanomaterial-based chemical sensors, self-healing “electronic skin,” breath analysis, and more. Last spring, he launched the SniffPhone, a breathalyzer plug-in for smartphones that can detect over 23 diseases, including lung cancer. As easy as talking to Siri.

While attending the University of Cambridge, social psychologist Marjaneh Halati wrote her Ph.D. thesis on the often abusive institution of marriage in Iran and has devoted her life since to helping vulnerable women recover from its damages. Halati’s Omid-e-Mehr Foundation in Tehran offers three-year rehabilitation programs providing therapy, education, vocational training, and housing to victims of trauma and abuse. Currently, she’s building a career and entrepreneurship center for the program’s graduates to combat Iranian hiring norms that discriminate against female runaways.

Sangu Delle Shells Out for a Stronger Africa

Prior to leaving her hometown of Benghazi, Dr. Laila Bugaighis logged 23 years in public health. She taught at Libya’s medical university, crafted policy reform, and served as CEO of Benghazi Medical Center, where she partnered with Massachusetts General Hospital to develop high-standard ambulance and emergency childbirth services in rural areas—a project that had been derailed by civil war. An outspoken women’s rights advocate, Bugaighis recently moved to Washington, D.C., as threats and violence toward female political activists escalated in Libya.

Dr. BJ Miller, executive director at the Zen Hospice Project, is a man with an illuminated view of his own mortality. As a student at Princeton, a near-fatal electrical shock cost Miller both legs below the knee and half of one arm. The experience continues to inform his work as a pioneer in palliative care, merging traditional medical services with an attitude that embraces dying as “an essential part of life.” This year, he’s fighting to make insurance companies cover peaceful end-of-life care.

Last Mile Health, an organization that trains and equips community health workers in rural areas, was founded in a closet in Liberia in 2007. Over the past two years, its staff and trainees led the coun- try’s Ebola response—Liberia was declared free of the virus in January. Now Lisha McCormick, the organization’s chief development officer, is shaping policy with the Liberian government to professionalize those workers and deploy 4,000 personnel across all remote villages in the country, bringing primary care to an estimated 1.2 million people.

To minimize the suffering of diabetics and cancer patients, University of North Carolina biomedical engineer Zhen Gu wants to kill the syringe. He’s currently developing two precision drug-delivery systems: a topical “smart insulin patch” that releases insulin automatically into the bloodstream and nanocapsules that deliver anticancer drugs to the most active destinations.

When pharmaceutical company GlaxoSmithKline appointed Cohen to lead its malaria vaccine program in ’87, he admits he knew little about the infectious disease. Last July, the RTS,S malaria vaccine candidate that Cohen, now quasi-retired, helped invent became the first ever to receive international regulatory approval. It begins pilot deployment in sub-Saharan Africa this year.

It began with condoms. In the late ’80s, Sara Tifft entered the global health sphere directing a contraceptive social-marketing program in Bolivia. These days, she is a leader in global health nonprofit PATH’s reproductive health program, geared toward the 225 million women worldwide who lack access to modern contraception. Tifft helms PATH’s pilot program for the Sayana Press device—as of September, the first self-injectable contraceptive approved in the United Kingdom—in Burkina Faso, Niger, Senegal, and Uganda.