Flashing a passport can be a lifesaving move 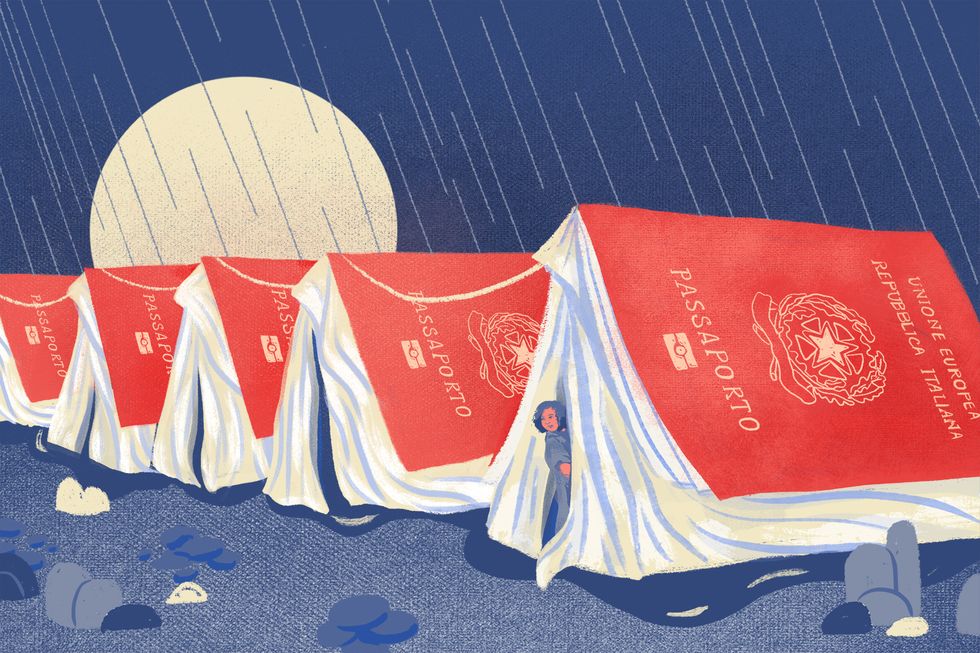 Among the passengers crammed into the rattling white van traversing Lebanon’s northern edge were a pair of young Syrian refugees.

As the van slowed to a stop at the first of several Army checkpoints along the route, the Syrians tensed, waiting to see if the soldier on duty would wave them through, as he had with the line of cars before. But this time, the soldier told the driver to stop. He walked around to the passenger door and asked the question the men had been fearing: “Where’s your identification?”

[quote position="left" is_quote="true"]I thought before that the most difficult part would be to live in a tent, to have a different routine. I was completely wrong.[/quote]

The younger of the Syrians didn’t have legal residency papers. A month earlier, he had fled Syria, where he had been tortured and castrated. He was en route to Beirut to file a report with a human rights group when the van was stopped. Now he could be arrested for his lack of legal status.

The Syrians were accompanied by a pair of Italian volunteers, who flashed their own passports and began to explain the situation.

In the past, they had often found that the sight of a European passport was enough to persuade soldiers to let undocumented refugees go. But this time, their presence and the explanation failed to move the soldier, who escorted the younger Syrian man into the station. The Italians persisted. Finally, the Italians managed to get permission to enter the station and talk to the commander.

“And they let us go,” said volunteer Duilio Magri, 25, still incredulous. “It’s the first time they took a Syrian, and we entered the building and came out with the Syrian.”

Magri is a volunteer with Operazione Colomba—“Operation Dove” in English—an Italian organization formed by Catholic activists that sends volunteers to live in conflict zones around the world. The group believes that the presence of foreigners from a European country can help protect people who might otherwise be targeted for attacks. In other cases, volunteers can serve as mediators between opposing sides.

The project launched in 1992 during the Balkans conflict and now operates in Colombia, Palestine, Albania, and here in Lebanon, just across the border from Syria. Although spillover of the fighting next door has been limited, Lebanon is hosting an estimated 1.5 million Syrian refugees, inflaming an already tense political environment in a small country still healing from its own 15-year civil war.

When the Italian volunteers arrived in Lebanon three years ago and asked the residents of one of the many informal refugee camps if they could set up a tent and live with them, the refugees said no, said Alberto Capannini, one of the group’s founders who now oversees its operations in Lebanon. “We asked why. They said because it’s not possible to live like this,” he said. “They meant it’s not human—we are not human, and you are from Europe, so you are very important. We decided to stay there because the only way to tell someone you are a man is not to say it, but to stay with them.”

Later, the volunteers moved to another camp nearby, where some of the refugees had received death threats—likely from Lebanese locals, Capannini believes—and were in a state of high anxiety. A rotating group of volunteers have been living in this camp of some 20 families in the village of Tel Abbas, some five kilometers from the Syrian border, for the past three years.

Unlike Capannini, Magri is a relative newcomer. When he landed in Lebanon in April, he spoke no Arabic and had only a vague idea of what he would encounter. “I thought before that the most difficult part would be to live in a tent, to have a different routine,” Magri said. “It was completely wrong. The most difficult part, but also the richest one, is to share all the situations with the refugees.”

As the Muslim holy month of Ramadan began in late May, the volunteers were wrestling with a particularly knotty situation. A few weeks earlier, they had been approached by the family of a 13-year-old Syrian boy with aplastic anemia, a rare and dangerous disease in which the bone marrow stops producing enough blood cells. The boy needed a bone marrow transplant, an expensive and risky operation. Magri and Capannini were scrambling to arrange visas and raise funds for the boy and two family members to travel to Italy for the operation and to manage his care in Lebanon in the meantime.

The day before the start of Ramadan, they had an appointment with the Italian embassy to bring the boy there to have his fingerprints taken—but he was in the hospital, which initially refused to let him go because the bill had not been paid. After negotiating his release and traveling to the embassy, the volunteers then had to scramble to get $1,700 in cash to pay for medication the boy needed immediately. Eventually, they were able to get the boy and two of his brothers to Italy, where he is now awaiting the operation.

This case is an exception, Capannini said—in general, Operazione Colomba does not provide material aid directly to the refugees, instead acting as a liaison with the United Nations and other organizations. Much of their day-to-day work relies on nothing more than the power of having a European passport. Because of the complicated and expensive requirements to maintain legal residency status in Lebanon, most of the Syrian refugees are not legally authorized to live or work in the country. With a network of Army checkpoints dotting roads throughout the country, any travel outside the confines of the camp means risking arrest and spending time in Lebanese jail.

[quote position="full" is_quote="true"]The Syrians have an incredible possibility to be invisible to the Lebanese. When we come, they are visible.[/quote]

The Italians accompany the refugees on trips to the doctor, to U.N. offices, and on other errands. Often, simply the presence of a European is enough to prevent a soldier from taking an undocumented Syrian into custody. Other times, the Italians’ presence can encourage medical workers and bureaucrats to pay attention to refugees whose cases they might otherwise brush off. “The Syrians have an incredible possibility to be invisible to the Lebanese,” Capannini said. “When we come, they are visible.”

Over the past year and a half, the organization has also served a second purpose: as a conduit for some refugees to travel from Lebanon to resettlement in Italy. In 2016, church-affiliated organizations in conjunction with the Italian government launched the humanitarian corridors program, under which a total of 1,000 refugees will travel from Lebanon and Morocco to Italy. The Operazione Colomba volunteers worked with the program, referring families for resettlement.

[quote position="left" is_quote="true"]I thought before that the most difficult part would be to live in a tent, to have a different routine. I was completely wrong.[/quote]

The family of Ahmed al-Khalid was one of those. Al-Khalid, from Homs, had been imprisoned by the Syrian regime for a year, he said. Upon his release, he and his family fled to Lebanon, where they lived in refugee camps for more than three years. Al-Khalid spent many nights sharing tea and meals with the Italian volunteers in the Tel Abbas camp. Even when the volunteers arrived speaking little or no Arabic, al-Khalid said, “they understood us a bit, and we understood them a bit.”

In February, al-Khalid, his wife, and their three young children traveled to Italy via the humanitarian corridor and settled in a village near the northern city of Rimini.

Their tent has been replaced by a house with three bedrooms. Al-Khalid and his wife are studying Italian, and the older children are enrolled in school. Former Operazione Colomba volunteers have made trips to see them. Al-Khalid stops by the organization’s office in Rimini almost every week, sometimes to attend meetings, sometimes just to visit.

“The Italians were very, very good with us,” he said in a telephone interview. “They helped us with the hospital, with the army, with the U.N. Many times they went with us to the doctor, with the children to the doctor.” Most importantly, he said, “Without them, we couldn’t have come to Italy.”