“The point of this museum is to just stop wars. See what you are doing to your kids.” 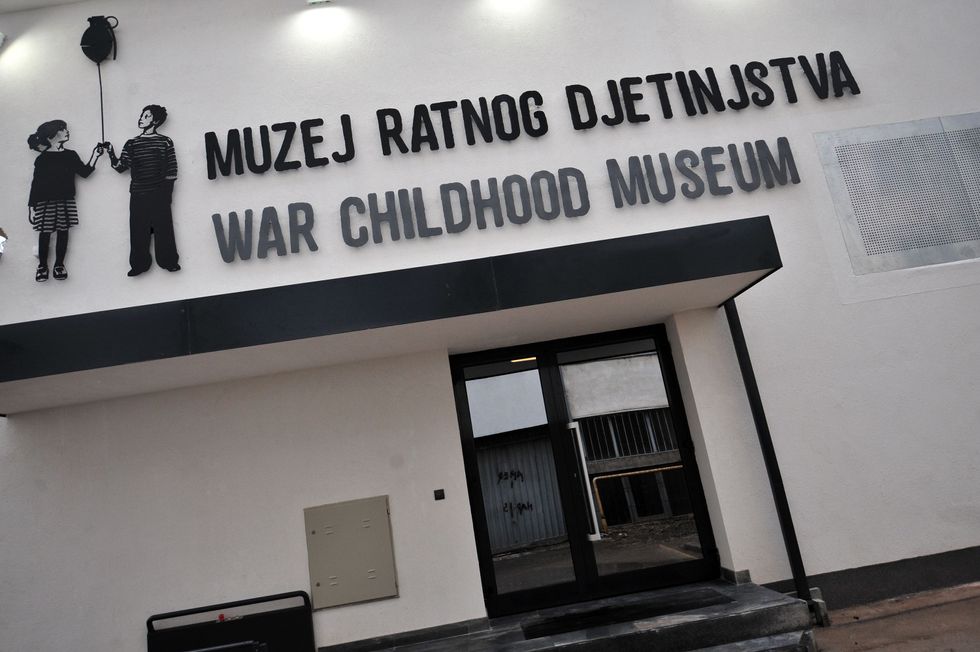 White ballet slippers symbolize childhood for Mela Softic. She grew up during the siege of Sarajevo in the 1990s. Her memories of youth are those of war.

“Dancing was something that helped me survive [the] war,” said Softic, who was 8 years old when the war broke out in Bosnia and Herzegovina in April 1992. The Bosnian war was one of several conflicts in the 1990s that shook the region during the breakup of Yugoslavia.

During the siege, the Bosnian Serb army encircled the city, targeting civilians, and for years citizens of Sarajevo lived in fear. Thousands of children were killed and many more were robbed of a normal childhood.

Many children, like Softic, spent their formative years in a state of fear and deprivation, dreaming of chocolate, fresh fruit, and other luxuries stolen by the circumstances, often cowering in cellars during shelling.

The generation raised in the Bosnia war were forced to grow up prematurely. But this was not an anomaly. Today, this is a reality for children in conflict zones all over the world, and those who survive the violence often suffer from health and psychological problems long after the conflict ends.

according to UNICEF, one in nine children live in conflict zones. Those under the age of five are twice as likely to die from preventable diseases.

In Sarajevo, a 29-year-old author is shedding new light on the world of children in conflict with a unique project.

Jasminko Halilovic, who made Forbes 30 Under 30 list in 2018, was just 4 years old when the war broke out. In an effort to create a memorial of his own experience, and those of other children affected by the siege, he decided to start collecting testimonies.

The museum collects personal objects and oral testimonies in order to tell the story of wartime childhood. Softic’s pair of white ballet slippers is one of 4,000 items donated to the museum by Bosnians. The collection features a bulletproof vest, a half-finished letter, and pieces of a destroyed playground, among other sentimental artifacts.

Although the WCM has only been in operation for a year, the museum is part of a larger project started by Halilovic. He contacted hundreds of people who were young during the Bosnian war and asked them to answer the question, “What was a war childhood for you?” via text message, in 160 characters or less.

He collected more than 1,000 responses, which he compiled in the book “War Childhood: Sarajevo 1992–1995.” The book’s success inspired him to found the museum.

The WCM has collaborated with over 300 individuals to collect stories and mementos from the war in Bosnia. Each object tells a unique story about the children affected by violence.

The museum plans to continue to collect the stories of those affected by the conflict, “We will continue collecting objects from those who were in Sarajevo during the armed conflict, however, we are collecting objects and stories from people from all around the country, no matter where in BiH they were,” said Almedina Lozic, the collection and content manager.

The museum has a great significance to those who have contributed, but the intimacy of the experience is not lost on others.

[quote position="full" is_quote="true"]The innocence of childhood was lost, despite how normal they tried to make it.[/quote]

The architecture is modern and sophisticated, the sparse design complementing the tattered possessions lined up in glass cases and lit by spotlights.

Visitors from all over the world are moved by the stories mounted on plaques next to each object.

“I could never relate to what they saw, heard, and experienced. I pictured myself during that time – living a normal childhood … and here these children had that all taken away from them – they were looking death right in the eye every day. The innocence of childhood was lost, despite how normal they tried to make it,” said Stephane Pallhorn, 24, from Melbourne, Australia, who visited the museum in November 2017.

Although Bosnian children are currently the central focus of the museum in Sarajevo, Lozic says that “with time we will include more and more objects and stories from other countries.” Each new exhibition is set to feature a few personal objects and stories collected from children in different areas of armed conflict. In April, the exhibit will rotate the items on display and include one item from a Syrian child refugee in Lebanon.

Four organizations, Basmeh & Zeitooneh, Sadalsuud Foundation, From Syria with Love, and Sawa Foundation, have partnered with the WCM, and together they will launch a traveling exhibition this year containing around 40 objects and stories. The exhibition will start in Sarajevo and travel across Europe, ending in Beirut, where the children and their families will get a chance to see their items and stories on display. The museum has already collected 80 objects.

[quote position="full" is_quote="true"]We hope that our exhibition … will contribute to understanding of what these refugees went through.[/quote]

One donated item is a drawing of an aircraft. A boy drew it when he left Syria at age 2. Although he does not remember drawing it, his family does, and often reminds him of his reasons for drawing it. He wanted to use the aircraft to fly over Syria and see what the country looks like.

“We hope that our exhibition, when we tour it around European cities and countries … will contribute to understanding of what these refugees went through, what brings them there, why they are there, and how the mutual trust can be established based on understanding their experiences,” said Halilovic.

The WCM staff plans to use the same model for an exhibition on children affected by conflict in the Ukraine. This will exhibition will start in 2019.

The WCM aims to use the new exhibitions to build on its growing international recognition. On December 5, 2017, the museum was awarded the prestigious 2018 Council of Europe Museum Prize by the Culture Committee of the Parliamentary Assembly of the Council of Europe (PACE).

“Sometimes it’s difficult to use all the opportunities that we have because we have many invitations for exhibitions for different collaborations but we need to pick priorities,” said Halilovic.

Students from the George Washington Museum Studies Department have been hired for the summer to work on a temporary exhibition, by the WCM in Washington D.C., dedicated to children across the world who lived through conflict or experienced it secondhand.

Alexandra Hartley, education materials developer at the WCM and a history teacher from the United States, has introduced a curriculum entitled “War Childhood” for primary school children in the school district where she teaches in Ithaca, New York. She uses material from the WCM, “The Diary of Anne Frank,” and “Zlata’s Diary” – the account of the so-called “Anne Frank of Bosnia.”

Through education, Halilovic hopes to raise awareness regarding issues that stem from childhood interrupted by conflict. In addition, the museum managers plan to develop curricula to educate students of all ages.

Although the war in Bosnia ended in 1995, conflict continues to disrupt and dominate the course of children’s lives around the globe. For Softic, the WCM project has a compelling message for the world.

“The collection in this museum is from Bosnia, but the museum does not only focus on Bosnia. It is focused on war childhood anywhere in the world,” she says. “The point of this museum is to just stop wars. See what you are doing to your kids. Just stop all wars.”