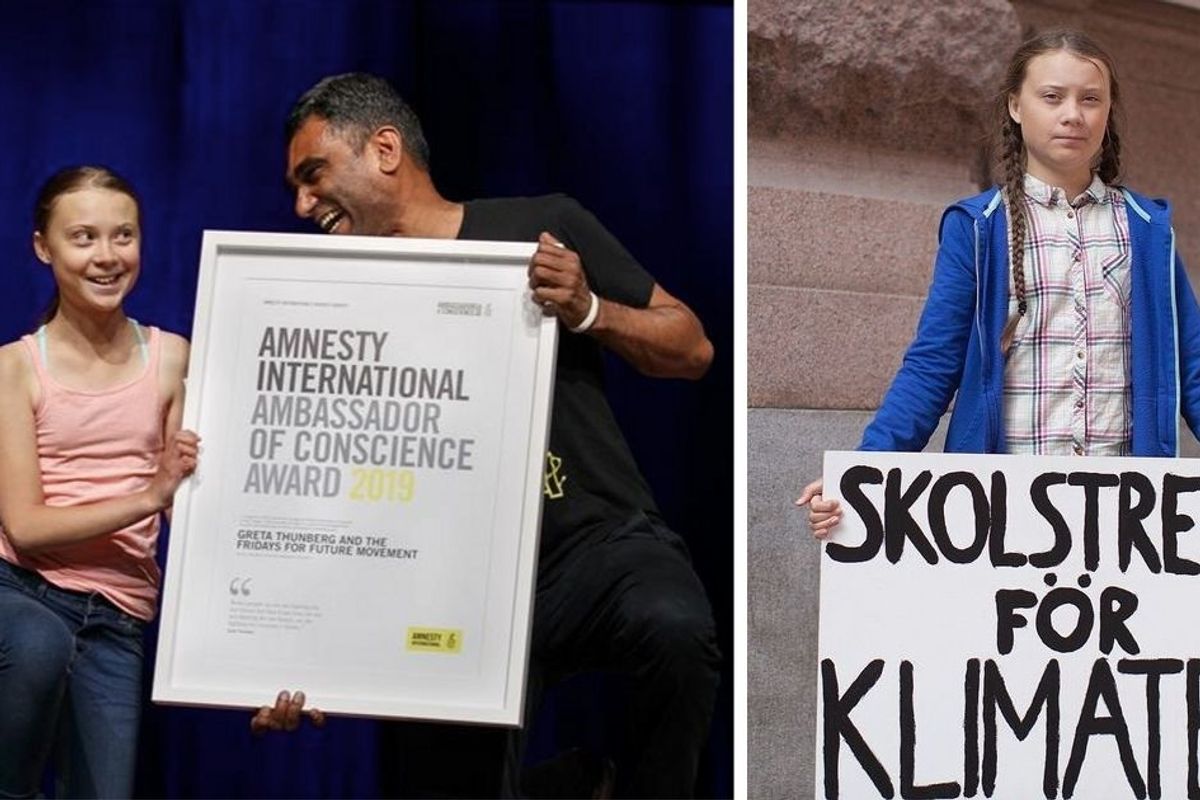 Greta Thunberg has been dubbed the "Joan of Arc of climate change" for good reason. The 16-year-old activist embodies the courage and conviction of the unlikely underdog heroine, as well as the seemingly innate ability to lead a movement.

Thunberg has dedicated her young life to waking up the world to the climate crisis we face and cutting the crap that gets in the way of fixing it. Her speeches are a unique blend of calm rationality and no-holds-barred bluntness. She speaks truth to power, dispassionately and unflinchingly, and it is glorious.

In the past two years, Thunberg has spoken to legislatures and meetings of global leaders, basically telling them to stop failing in their duties. She sugarcoats nothing. She simply lays out the facts about climate change based on the best science we have available, explains what scientists have told us we need to do, and then tells leaders to hop on the train immediately or move off the tracks.

Thunberg will be helping lead a week of global climate strikes starting September 20, and Amnesty International just awarded her its 2019 Ambassador of Conscience award.

All of Thunberg's speeches are worth listening to. There are far more than 10 pieces of gold in them, but here are some of her best truth-to-power nuggets:

"We children are not sacrificing our education and our childhood for you to tell us what you consider is politically possible in the society that you have created. We have not taken to the streets for you to take selfies with us, and tell us that you really admire what we do.

"For way too long, the politicians and the people in power have gotten away with not doing anything to fight the climate crisis, but we will make sure that they will not get away with it any longer. We are striking because we have done our homework and they have not."

4) In an interview published in Financial Times, February 2019:

"People tell me that they are so hopeful when they see me, and other children 'school-striking', and they say, 'Oh the children are going to save us.' But no, we aren't. We are too young to be able to do that. We don't have time to wait for us to grow up and fix this in the future. The people who are in power now need to do this now."

"We say that all those solutions needed are not known to anyone and therefore we must unite behind the science and find them together along the way. But you do not listen to that. Because those answers are for solving a crisis that most of you don't even fully understand. Or don't want to understand.

You don't listen to the science because you are only interested in solutions that will enable you to carry on like before. Like now. And those answers don't exist any more. Because you did not act in time."

6) In a speech to the European Economic and Social Committee, February 2019

"We need to focus every inch of our being on climate change, because if we fail to do so than all our achievements and progress have been for nothing and all that will remain of our political leaders' legacy will be the greatest failure of human history. And they will be remembered as the greatest villains of all time, because they have chosen not to listen and not to act."

RELATED: 'How do we save this f--king planet?' A 7-point response is giving people hope and some clear answers.

"Some people say that the climate crisis is something that we all have created. But that is just another convenient lie. Because if everyone is guilty then no one is to blame. And someone is to blame. Some people – some companies and some decision-makers in particular – have known exactly what priceless values they are sacrificing to continue making unimaginable amounts of money."

"You only talk about moving forward with the same bad ideas that got us into this mess. Even when the only sensible thing to do is pull the emergency brake. You are not mature enough to tell it like it is. Even that burden you leave to your children.

We have not come here to beg world leaders to care. You have ignored us in the past and you will ignore us again. You've run out of excuses and we're running out of time. We've come here to let you know that change is coming, whether you like it or not. The real power belongs to the people."

"We are facing a disaster of unspoken sufferings for enormous amounts of people and now is not the time for speaking politely, we're focusing on what we can or cannot say. Now it's the time to speak clearly. Solving the client crisis is the greatest and most complex challenge that Homo sapiens has have ever faced.

Preach, Greta. Ignore the deniers and the haters, keep putting pressure on those in power, and continue being the truth-telling hero our planet needs.

From Your Site Articles
Related Articles Around the Web
climate change
Trending Topics
THE DAILY GOOD
Start your day with something GOOD.
Trending Stories
Slideshows