How lab-grown meat might save the environment, and make vegetarians of us all. 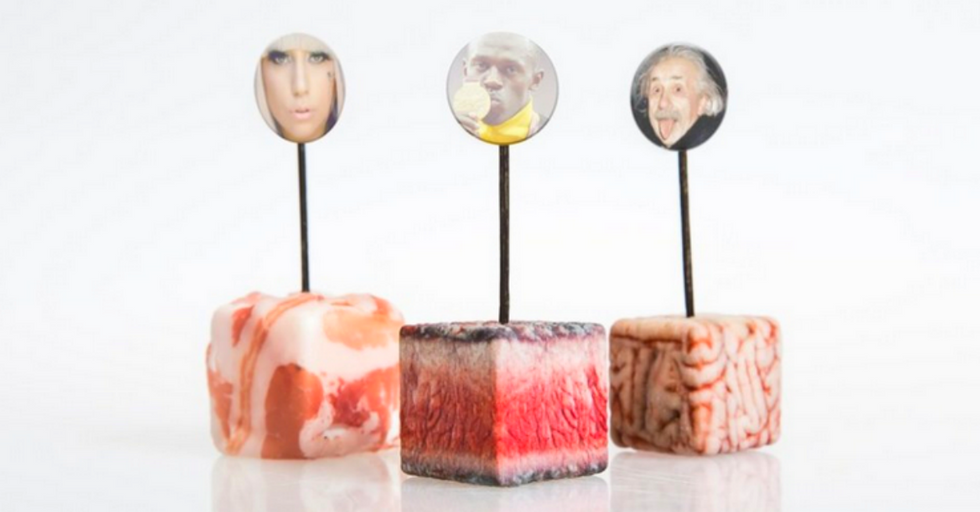 What if you could eat a cheeseburger made from Lady Gaga? Or taste the meat of the extinct dodo bird, but in nugget form? Bistro In Vitro hopes to make all of these culinary “delights” a reality in the not-too-distant-future. A self-proclaimed “virtual restaurant,” the all-digital bistro offers up food for thought rather than an actual menu, though it hopes some day to open a brick-and-mortar spot. The restaurant’s enigmatic creative director, Koert van Mensvoort, is an artist, scientist, philosopher, and the head of the Next Nature Lab. He has more than a few ideas on how we can both cut down on the destructive aspects of the meat industry and intro lab-grown options into our regular diet. “Lab meat has the potential to be more sustainable and animal friendly than current meat,” van Mensvoort recently proclaimed to GOOD, though he does admit there are “still many scientific hurdles” before a lab-grown leg of lamb lands on your dinner table.

(above) “Microbial Lamb’s Meat.” According to the site "this beautiful cut of microbial lamb has been prepared using minimal electricity, the power of beneficial bacteria and the natural fermenting process."

Bistro In Vitro’s imagined menu, which reads more sci-fi than Seamless, offers everything from “Friendly Foie Gras”—entirely sourced from goose liver DNA—to meat foam cocktails. Underwritten by the Submarine Channel and Next Nature Network, the project’s creators pose the question, “What would it mean to be a meat-eater, or a vegetarian, if no actual animals were killed?” This philosophical line of thought has a real level of urgency, given that it’s projected that the world’s population will reach nine billion by 2050—and that the demand for meat continues to grow at unsustainable rates. Currently it’s estimated that the amount of energy, water, and land area used in the farming of livestock causes between 10 to 35 per cent of global greenhouse gas emissions. In addition to damaging our environment, there are also the moral issues of animal cruelty and the (frequent) exploitation of workers.

As a solution, scientists have pointed to lab-grown meat—made via stem cells that have been harvested and cultured in a bioreactor and grown into muscle tissue—as a potential alternative. In 2013, the first lab-grown hamburger was created by a team of Dutch scientists and eaten on global television. A major breakthrough, it also came with the hefty price tag of $330,000 and was not exactly a proper Big Mac replacement. While scientists continue to think of new ways of creating lab-grown burgers, van Mensvoort thinks we’re still thinking small. “I believe our notion of nature is rather naive and needs updating,” he says. “Most scientists focus on lab meat as the solution to a problem, but in Bistro In Vitro we also aim to think more positively about it as a celebration of entirely new food experiences.” Imagining a world beyond the familiar faux sausage link or soy-based chicken tender, he has harnessed a team of artists, designers, chefs, scientists, and philosophers to help us, as a society, imagine the limitless options on the horizon. In 2014 the team even released The In Vitro Cookbook, a collection of 45 hypothetical recipes, many of which were later reproduced for the Bistro.

On the Bistro’s site, next to each dining option, is a star rating; five stars indicates the dish could be created with available technology, while one star indicates the dish might not be available for the next couple of decades. “By exploring and pushing the boundaries of our food culture we want to do away with the idea that cultured meat is an inferior meat substitute,” says van Mensvoort. But will people be interested in say, an oyster made with blood, or a cube of meat made from an ex-lover’s DNA? Though the restaurant is still very much in beta testing, they’ve invited the public to create their own personalized menus and reserve a virtual table at their someday-restaurant. When you “book,” you're presented with nine different options for an appetizer, dinner, and dessert—each one complete with a realistic photo or video. The images were created through a combination of CGI and 3-D modeling, but in some cases are real-life inventions. For the most part, however, they are still in the conceptualization stage. “Because cultured meat is still in development at the moment the dishes cannot actually be prepared (yet),” says van Mensvoort. “It is not our goal to promote cultured meat or to predict the future, but rather to show a range of potential products and culinary trends that can help us to decide what kind of future we really want. Who knows, it might not be long before the first actual in vitro meat restaurant opens its doors.”

1947 Defense Department video warned against Trumpism: 'Don't Be a Sucker.'