Long wants to combat hate by making a positive investment in education. 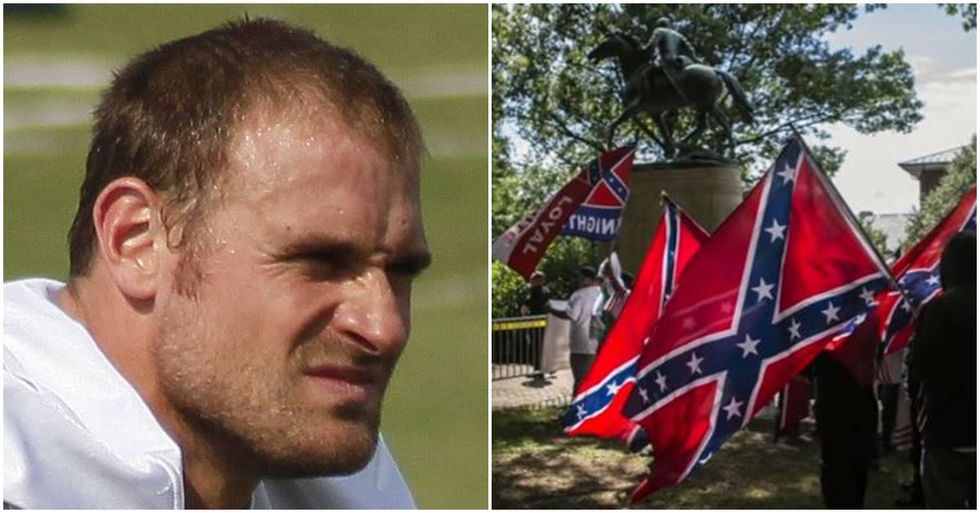 When white supremacists took to the streets of Charlottesville, Virginia, last month at the Unite the Right rally, counterprotesters showed up to beat back their message of hate and intimidation with a showing of unity. Now, Charlottesville resident, Philadelphia Eagles defensive end Chris Long and his wife Megan are fighting back against bigotry in their community by making a positive contribution to the city’s youth.

“In August, we watched people fill our hometown streets with hatred and bigotry,” ​Long said in a statement. “Megan and I decided to try to combat those actions with our own positive investment in our community.” Long is donating his earnings from six games this season to pay for two Charlottesville middle-school children to attend seven-year, all-expenses-paid school programs at Long’s alma mater, St. Anne’s-Belfield School. The scholarships will be administered through St. Anne’s-Belfield School and awarded to students affiliated with the Boys & Girls Clubs of Central Virginia.

This isn’t the first time Long has worked to empower disenfranchised communities. In 2015, he launched The Chris Long Foundation, which helps raise money for the Waterboys Initiative dedicated to building wells for communities in East Africa. So far, the initiative has funded 24 wells in the region. According to its website, “Waterboys unites NFL players from across the league in service. As Waterboys, players put aside allegiance and team up with fans in support of a single shared cause: providing clean, accessible drinking water to rural communities in East Africa.”

Long also recently made a powerful gesture of solidarity with a black teammate. He put his hand on the back of Malcolm Jenkins’ jersey as he sat during the national anthem before a preseason game against the Buffalo Bills. “I’ve heard a lot of people say you need white athletes to get involved in the anthem protests,” Long said, per ESPN. “I’ve said before I’ll never kneel for an anthem because the flag means something different for everybody in this country, but I support my peers. And if you don’t see why you need allies for people that are fighting for equality right now, I don’t think you’ll ever see it.”