A Sport Invented Just For Halloween 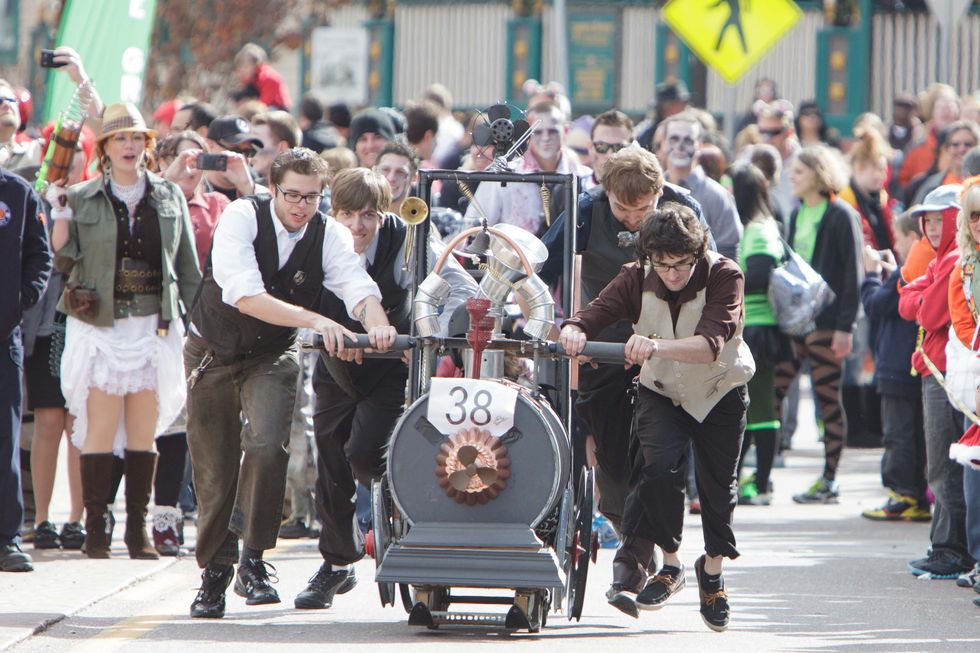 Creepy and bizarre sights are commonplace on Halloween weekend, but the town of Manitou Springs, Colorado—which boasts an elevation (6,412 feet) greater than its population (around 5,000)—adds elements of sport and celebration to the macabre mix. Combine trick-or-treating, a funeral procession, and a Soap Box Derby, and you have Saturday’s annual Emma Crawford Coffin Race & Parade.

That’s right. A coffin race—which looks all sorts of awesome.

Legend has it that Emma Crawford, a young woman from Massachusetts, came to Manitou Springs, which sits aside the towering Pike’s Peak just outside Colorado Springs, hoping the healing nature of the springs would ease her tuberculosis symptoms. But Crawford died in 1891 at age 28, and as per her wishes, was buried atop nearby Red Mountain. But her coffin was moved to the southwest slope of the mountain in 1912 due to construction of a railroad track incline.

In 1929, the coffin, dislodged by heavy rains and erosion, slid down the mountain and into the canyon where it was found by a couple of young boys. Crawford eventually was reburied in a cemetery in town.

Today, teams of five honor that journey every year around Halloween. Each team consists of one “Emma”—riding in a custom-built coffin—and four costumed runners racing the coffin down the Manitou Avenue course.

The decorated coffins must be at least 2 feet wide by 5 feet long and no larger than 3 feet, 10 inches wide by 8 feet long (with no height restriction, a team could theoretically race a very narrow 11-story coffin down a street in central Colorado). The runners (or pushers) guide the coffin using four handles or push-pull bars on the front and rear of the coffin as they race the 585-foot course in sets of two-team heats

Approximately 10,000 people will gather to watch 70 teams participate in Saturday’s festivities, which have grown dramatically since the event’s first running in 1995.

“They started with eight coffins,” Brittany Tafoya of the Manitou Springs Chamber of Commerce and Visitors Bureau told The Gazette. “It’s really just a local thing they didn’t expect to go boom.”

And while the event is part of an overall celebration, complete with a hearse parade, costumes, prizes, and the like, it’s still a competition. And thus, there are rules—some of which are included here (along with our own comments):

•At least three of the four runners must remain in contact with the coffin at all times until the coffin has come to a complete stop after crossing the finish line. Nobody wants a runaway coffin.

•No team substitutions are allowed between heats, though race officials have the authority to allow a sub in the case of injury. Being struck by a fast-moving coffin does seem reasonable grounds for legal substitution.

•Each team must provide its own “Emma.” Each Emma must wear a helmet while in her coffin. After all, coffin mortality rates typically are high.

•Teams are responsible for transporting their coffins to and from the race. Teams must also participate in the parade of coffins portion of the celebration. It's unclear whether they must keep their hazard lights on.

•Protests must be made within 10 minutes of the end of the heat. Ties may or may not be described as “dead heats.”

•Participants must conduct themselves to the highest standards of behavior and sportsmanship. This is a coffin race, after all.

•Coffin race officials may disqualify any coffin they believe is dangerous. Further, all participants must sign waivers before the event. This is coffin racing, after all!

Race winners earn trophies, and awards are also given for Best Emma, Best Entourage, and Best Coffin. The festivities kick off at noon MT on Saturday.