Philadelphia's Chris Long has some thoughts on Kaepernick — and his hair. 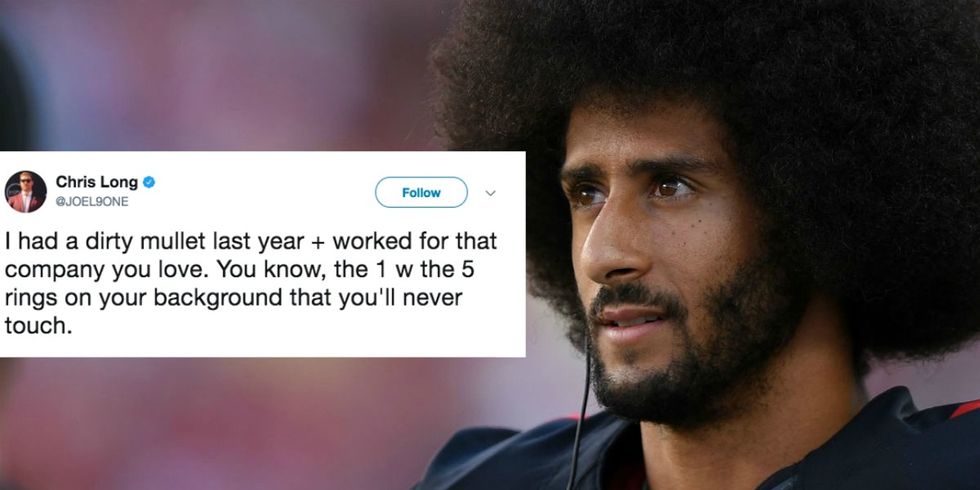 Colin Kaepernick is having trouble finding a job playing in the NFL.

The fact the former San Francisco 49ers quarterback, currently a free agent, hasn't been scooped up by an NFL team has baffled many of his old teammates, who consider Kaepernick a much stronger player than other recently recruited QBs in the league.

Many fans and pundits believe Kaepernick's outspokenness on social justice issues is the driving force behind his struggle to find work on the field.

In 2016, the athlete made waves by refusing to stand up for the national anthem before games, citing the systemic mistreatment of people of color and his support for the Black Lives Matter movement as the reasons for his peaceful protests.

Former NFL star Michael Vick, who was indicted on felony charges of dogfighting in 2007, doesn't think Kaepernick's politics are relevant to his employment though. Perplexingly, Vick said he believes Kaepernick's difficulty finding a job has to do with his Afro.

In an interview on Fox Sports 1, Vick suggested Kaepernick had an image problem and encouraged him to ditch the 'fro:

"The most important thing he needs to do is just try to be presentable."

"First thing we got to get Colin to do is cut his hair." — @MikeVick advises Kaepernick on rebuilding his image https://t.co/YENvUPOIgP
— Speak For Yourself (@Speak For Yourself)1500330610.0

Contradicting himself, Vick then switched gears to blame Kaepernick's problems landing a team on, above anything else, his performance: "The reason he's not playing has nothing to do with the national anthem. I think it's more solely on his play."

Chris Long says he chose the #Eagles because it was the best 'football fit' and his knowledge of the city from pare… https://t.co/LddpCPzLna
— Matt Lombardo (@Matt Lombardo)1490985095.0

In three tweets, which have since spread far and wide across the internet, the Philadelphia Eagle chimed in on the matter.

1. Long began by noting the contradiction in Vick's assessment: "What am I missing here?"

Is it Kaepernick's performance or is it the Afro that's the underlying issue?

2. Long wasn't aiming to be political, but he was trying to make sense of why a haircut would prevent one of the "best 32 QBs" from getting a job.

Kaepernick is certainly talented enough to be on an NFL team, according to Long. So why isn't he?

"Actually I know why [Kaepernick's] taking heat," one troll wrote. "Because people like you are brainwashed by the leftist cult where reality doesn't exist. How were the leftists able to brainwash you?"

3. Long used his own "dirty mullet" to point out why a haircut has nothing to do with a football players' hireability.

After another Twitter user argued that "regular guys wear suit & ties to job interviews" — asserting that appearances matter for any job — Long noted he once played with a "dirty mullet" and no one batted an eye.

"We have players w neck+face tattoos, long hair, beards," he continued in another tweet, driving home the point that an Afro shouldn't be a deal-breaker.

While Long didn't explicitly bring up race, it's undeniable that skin color plays a role in Kaepernick's situation.

Since Kaepernick spoke out on the systemic oppression of black and brown people in America, his hair has become a focal point for many critics, David Steele explained in Sporting News last year.

"One doesn’t have to wait long or look far to see a condemnation of him and his protest that includes a mention of his big, fluffy, throwback Afro — usually a crude, insulting, not-even-subtly racist reference," Steele explained. "Search 'Kaepernick stupid hair' on Twitter if you're not sure."

After receiving some backlash, Vick apologized for his comments, claiming his goal has always been to help Kaepernick — a player he considers "a great kid."

“What I said, I should have never said,” Vick explained on "The Dan Patrick Show." “I’m not a general manager, I’m not the guy who makes the decisions on getting him signed, and I’m truly sorry for what I said. I think I should have used a better choice of words."

“His Afro has nothing to do with him being signed, and I wasn’t trying to relay that message," he continued. "It was more about helping him, at the end of the day."

Now that Vick and Long agree that Kaepernick's abilities should be the deciding factor in getting the quarterback a job, hopefully the rest of America will jump on board too.