The Man Who Taught Canada To Love Basketball

Drake, Steve Nash, and others discuss the impact of Vince Carter in a new documentary. 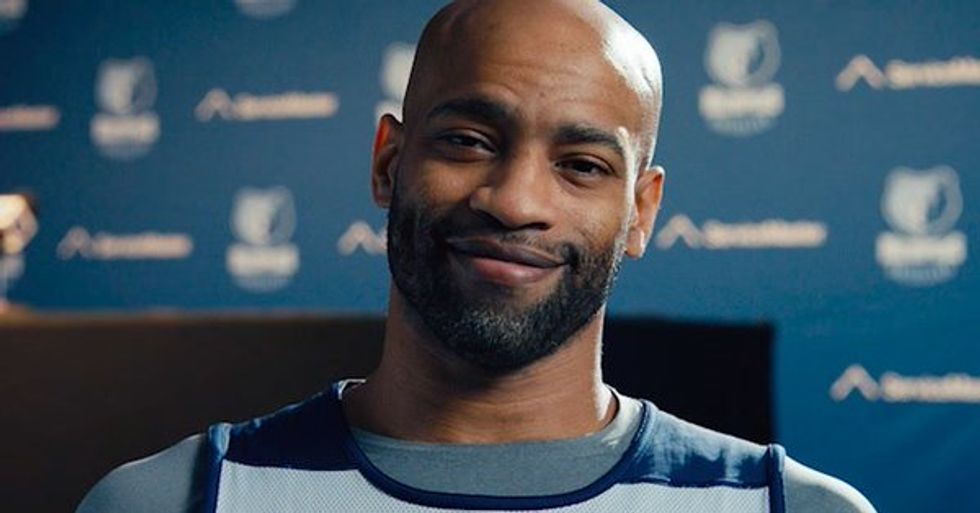 When the Toronto Raptors joined the NBA in 1995, fans in the Great White North were resistant, particularly without any superstar players. That all changed when the team traded for Vince Carter during the 1998 NBA draft, when Carter was selected #5 overall by the Raptors. Canada broke out with “Vinsanity” and dubbed their new superstar “Air Canada.” Basketball had officially emerged in Canada.

A new documentary, UNINTERRUPTED’s “The Carter Effect,” directed by Sean Menard, explores the cultural impact of Carter, whose seven-year tenure with the Raptors is said to have changed the sports landscape of Toronto and inspired a generation of artists and athletes who grew up during his tenure with the team. The film features interviews with Drake, Steve Nash, Tracy McGrady, and others who discuss Carter — an eight-time all-star and 19-year NBA veteran who has played for the Nets, Suns, Mavericks, and Grizzlies. The 40-year-old recently signed a deal with the Sacramento Kings for the 2017-18 season.

“The Carter Effect” is executive produced by LeBron James, Maverick Carter, Drake, and Adel Future Nur and was made for Uninterrupted, a digital media company founded by Carter and James. This week, it became the must-see film at the Toronto International Film Festival, where it premiered to sold-out audiences Saturday at the 2,000-seat Princess of Wales Theatre.

GOOD spoke with Menard about Carter and the state of basketball in Canada.

What did Canadians first think of Carter when he first came to the Raptors?

Let’s be honest, the Canadian basketball IQ wasn’t exactly very high when Vince first came here and we got a basketball team. It was a hockey culture. Vince’s game was a lot different, in the way that he’d have these exciting high-flying slam dunks. It’s exciting for someone who’s not a basketball fan to watch that. It’s different than what the other players can do. He was flying through the air, so it got people’s attention really quickly, and that’s the powerful part of a slam dunk.

How did Vince Carter pioneer bringing basketball to Canada?

I always say that if he was a player that just came and played and didn’t play the way he does and just collected his paycheck, there wouldn’t be a “Carter Effect.” Before Vince, a lot of American players would basically say, “You guys can draft me, but I’m not going to sign with you.” That was the standard for a lot of the Americans. They didn’t know too much about Canada. It was considered a kind of barren wasteland in the NBA in a lot of people’s eyes. Vince was very open-minded. He came here and discovered that it was a beautiful city, very diverse, very multi-cultural. The fans are welcoming and passionate, and he decided to do a lot of things away from the court.

What is the lasting effect on the sport's popularity there?

Vince started basketball camps for kids. The kids got to meet him and grew up to play in the NBA – Tristan Thompson and Cory Joseph are two examples. He also opened a nightclub. He had players come up and spend time in the city, and it was a very positive thing. He was bringing superstars who had previously never come up to Toronto from the basketball and hip-hop world.

Fans initially turned on Carter when he left Canada, but now he's seen as a good guy again. Can you talk a bit about that relationship?

I don’t think his popularity has come back for a lot of people. People felt hurt. He was painted as someone who wanted to leave at the time. He was accused of no longer trying. There was a famous news conference where he said he didn’t want to dunk anymore. ... It rubbed people the wrong way. It’s not what they wanted to hear from their superstar athlete … . In talking with Vince, he spoke about it like a relationship that had a bad breakup. You know, you look fondly on the relationship as your first love, and he wishes, because he was young, he hadn’t said or done things and said he wishes that he and the city were on better terms. The film is a step in the right direction to let people know the whole story. The film shows the entire picture these years later.

What would you hope people would take away from this documentary?

I just want people to walk away entertained. And I want to shine a light on the city of Toronto and help people understand that this city has become arguably the greatest fan base. When we had a playoff game, we had roughly 10,000 people outside the stadium lining the streets, watching it on a screen outside. Even when the team’s not playing at that particular arena, people are watching on the street. It’s a great representation of our city. Toronto is the greatest city in the world because you have people who’ve emmigrated from all over the world to Toronto and have set up shop here and created a life for themselves. ... I hope people come away with an appreciation for the city and what it’s like up here.

If you could have done anything different making this film, what would you have done?

No regrets. Not a damn thing. This was the first time I partnered with someone, and I was worried, but they were like, “You’re the filmmaker, just tell us what you need, and we’ll make it happen.” NBA footage costs a lot of money, and they never held me to a quota. I honestly feel it’s the best NBA documentary and best sports documentary ever made because we’re able to get it to a point where there were no compromises. I’m proud of the film. Maybe in five years I’ll look back, but for right now I’m very pleased with the film.