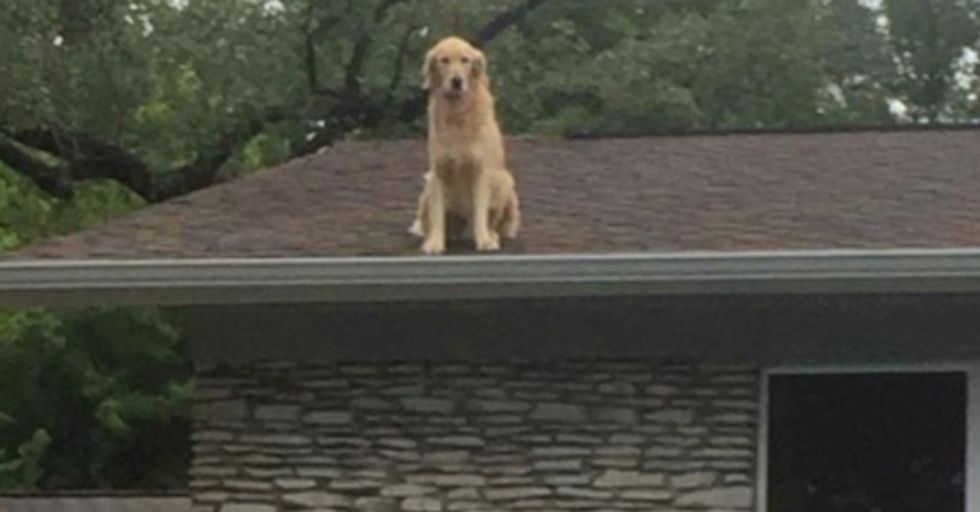 This article originally appeared on 12.05.18

If you were taking a stroll through a quiet neighborhood and happened to catch a glance of this majestic sight, you might bat an eye. You might do a double take. If you were (somewhat understandably) concerned about this surprising roof-dog's welfare, you might even approach the homeowners to tell them, “Uh, I'm not sure if you know...but there's a...dog...on your ROOF."

Well, the family inside is aware that there's often a dog on their roof. It's their pet Golden, Huckleberry, and he just sorta likes it up there.

To put passersby at ease and ebb the parade of concerned parties knocking on their door, Huckleberry's human put up a note explaining the whole weird scenario to those interested:

"Huckleberry is living up to his name and learned how to jump onto our roof from the backyard. We never leave him in the backyard without someone being at home. He will not jump off unless you entice him with food or a ball!"
"We appreciate your concern but please do not knock on our door... we know he's up there! But please feel free to take pictures of him and share with the world! #hucktheroofdog."

Of course, they ended it with a hashtag for photos shared on social media. Also, it seems a little strange that the owners mention that Huck is willing to jump 10 feet off a roof to chase food or a ball, but do nothing to suggest that people refrain from urging their dog to make that (seemingly dangerous) leap. Maybe Huck's got the whole process down to the point it's just not a concern.

This may seem like a pretty odd phenomenon, but not so odd that there isn't a whole corner of Reddit devoted to dogs who just seem to really, really enjoy roofs. It's called r/dogsonroofs, and boy does it ever deliver on that name.