J.R.R. Tolkien hated Nazi “race doctrine” and no problem telling his German publishing house about it. 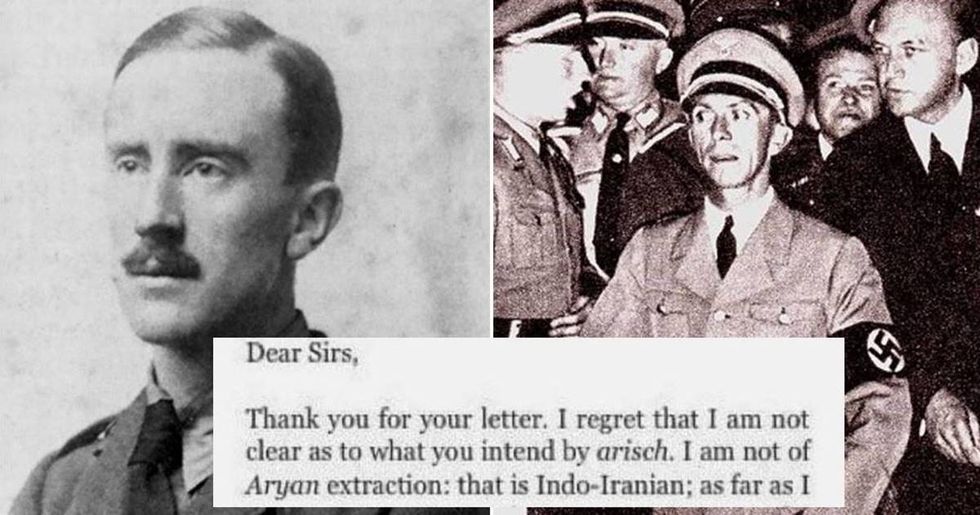 This article originally appeared on May 6, 2019

In 1933, Adolf Hitler handed the power of Jewish cultural life in Nazi Germany to his chief propagandist, Joseph Goebbels. Goebbels established a team of of regulators that would oversee the works of Jewish artists in film, theater, music, fine arts, literature, broadcasting, and the press.

Goebbels' new regulations essentially eliminated Jewish people from participating in mainstream German cultural activities by requiring them to have a license to do so.

This attempt by the Nazis to purge Germany of any culture that wasn't Aryan in origin led to the questioning of artists from outside the country.

In 1938, English author J. R. R. Tolkien and his British publisher, Stanley Unwin, opened talks with Rütten & Loening, a Berlin-based publishing house, about a German translation of his recently-published hit novel, “The Hobbit."

Privately, according to “1937 The Hobbit or There and Back Again," Tolkien told Unwin he hated Nazi “race-doctrine" as “wholly pernicious and unscientific." He added he had many Jewish friends and was considering abandoning the idea of a German translation altogether.

The Berlin-based publishing house sent Tolkien a letter asking for proof of his Aryan descent. Tolkien was incensed by the request and gave his publisher two responses, one in which he sidestepped the question, another in which he clapped back '30s-style with pure class.

His publisher sent the classy clap-back.

In the letter sent to Rütten & Loening, Tolkien notes that Aryans are of Indo-Iranian “extraction," correcting the incorrect Nazi aumption that Aryans come from northern Europe. He cuts to the chase by saying that he is not Jewish but holds them in high regard. “I regret that I appear to have no ancestors of that gifted people," Tolkien wrote.

Tolkien also takes a shot at the race policies of Nazi Germany by saying he's beginning to regret his German surname. “The time is not far distant when a German name will no longer be a source of pride," he writes.

25 July 1938 20 Northmoor Road, Oxford
Dear Sirs,
Thank you for your letter. I regret that I am not clear as to what you intend by arisch. I am not of Aryan extraction: that is Indo-Iranian; as far as I am aware none of my ancestors spoke Hindustani, Persian, Gypsy, or any related dialects. But if I am to understand that you are enquiring whether I am of Jewish origin, I can only reply that I regret that I appear to have no ancestors of that gifted people. My great-great-grandfather came to England in the eighteenth century from Germany: the main part of my descent is therefore purely English, and I am an English subject — which should be sufficient. I have been accustomed, nonetheless, to regard my German name with pride, and continued to do so throughout the period of the late regrettable war, in which I served in the English army. I cannot, however, forbear to comment that if impertinent and irrelevant inquiries of this sort are to become the rule in matters of literature, then the time is not far distant when a German name will no longer be a source of pride.
Your enquiry is doubtless made in order to comply with the laws of your own country, but that this should be held to apply to the subjects of another state would be improper, even if it had (as it has not) any bearing whatsoever on the merits of my work or its sustainability for publication, of which you appear to have satisfied yourselves without reference to my Abstammung.
I trust you will find this reply satisfactory, and
remain yours faithfully,
J. R. R. Tolkien